How could I have missed this! 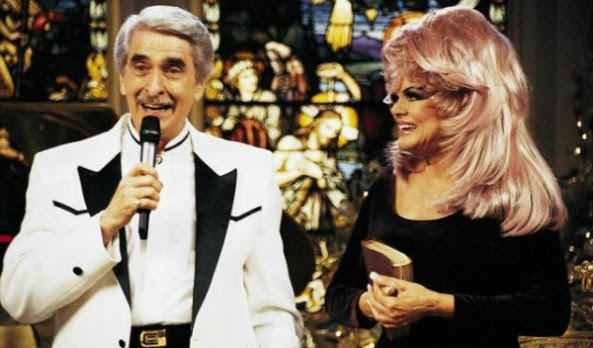 In a compound that was once known as Twitty City (after Conway Twitty, and if you don't know who he was, well, skip this part), Paul Crouch brought his brand of heretical, sensational, and outlandish (I almost cannot bring myself to call it "Christianity") religious entertainment to Tennessee.  What began in California as a desire to purchase one TV station became an empire of stations stretched across the globe.  In comparison, Jim Tammy Faye seemed almost normal!

Crouch kept a host of high profile though not necessarily orthodox headliners on his satellite TV empire  -- the likes of Kenneth Hagin, Kenneth Copeland, Creflo Dollar, Frederick Price, Joyce Meyer, Benny Hinn, and a host of others.  Included in that line up, on and off over time, were some of the well known names from evangelical Christianity:  Pat Robertson, Jimmy Swaggart, Jack Hayford, and Robert Schuller.

As he tells it, Crouch was about to lose his dream when a Missouri Synod Lutheran showed up with enough cash (memory has it $50,000) to close the gap and, as they say, the rest is history.  Grand plans, a lot of fake gilding and pink hair, and a whole lot of bad taste... well, you should not speak ill of the dead and, as a friend of mine used to say, "He be dead" at age 79 (Dec. 2, according to reports).  There were money scandals and sex scandals and family infighting scandals but they seem to have made nary a dent in the following of TBN (Trinity Broadcasting Network).  Perhaps among the many "true believers" were the curious who missed the days when Tammy Faye's makeup starting coming off at a dramatic moment.  Whatever.  We will see if his empire can survive the loss of its founder.  Part of me hopes the answer is "no".
Posted by Pastor Peters at 6:00 AM

You forgot to mention John Hagee, with his Power Point presentation on the End Times. As an RC, I especially loved his Scarlet Ho as Rita Heyworth on a seven-headed velociraptor. Lucas Cranach got nuttin' on the artist here.