When is sin not a sin? A disorder not a disorder? A crime not a crime? 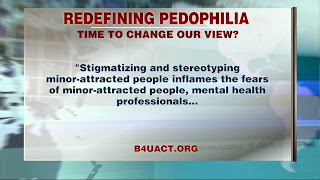 Pedophilia Now Classified As A Sexual Orientation  (read it all here....)

People can classify themselves as heterosexual, homosexual, asexual, metrosexual. There are endless sexual orientations under the sun, and now, pedophilia can be added to the list.

In the fifth edition of the Diagnostic and Statistical Manual of Mental Disorders (DSM V), the American Psychological Association (APA) drew a very distinct line between pedophilia and pedophilic disorder. Pedophilia refers to a sexual orientation or profession of sexual preference devoid of consummation, whereas pedophilic disorder is defined as a compulsion and is used in reference to individuals who act on their sexuality.

APA’s decision has given rise to numerous pedophilia-advocacy groups, the chief of them being B4U-ACT, a non-profit grassroots organization based in Maryland. Created in 2003 primarily as a means for “minor-attracted persons” to be open about their sexual preferences in a supportive atmosphere, B4U-ACT is now widening the scope of their organization.

One line sticks out:  with sexual knowledge comes sexual consent.  In other words, as soon as a child obtains knowledge of sex, that child by nature is equipped to give informed sexual consent.  This is precisely what our culture and society have insisted against.  In fact, the point against consent is not that children do not know the facts of life but that they lack the maturity of judgment to give consent.

I well recall when I was a kid and I sent in to join one of those record company deals in which you were lured by the thought of a dozen LPs of your favorite artists (about the dawn of CCR, Moody Blues, etc.) but in the fine print was the requirement that over two years you had to purchase so many records at full price.  When I ran up against not enough money to purchase the records, I thought I could get rid of the responsibility by claiming the legal prohibition against minors signing and being held accountable to contracts.  It might have worked for the record company but my mom made me work off the money she had to pay to release me from my debt.

The whole of our society has been built upon the idea that children must be protected in the marketplace and from predators who would take advantage of them.  It was borne of the conviction that youth should be a time of play in which adult decisions and responsibilities are postponed.  Now we have transformed the way we see childhood.  We dress up little girls to look like sexy pop stars.  We make pornography so accessible it is impossible for children not to see it.  We have filled the TV hours with violent and borderline pornographic images.  PG-13 movies are today what PG movies once were and R movies are what PG-13 used to be.  The appeal to violence and even sex has driven a video game industry targeting youth from a young age.  So it is logical for pedophiles to think the time has come to tear down the distinction between knowledge and consent and allow children to choose whether or not to be sexually active with adults.

It is clear that as gay and lesbians are mainstreamed and become no longer the fringe or shadow of American culture, life, and identity, the next sexual minorities in line for liberation and social acceptance will be pedophiles and those desiring polyamorous relationships.  Beyond that it is hard to predict as their are ample choices among the forbidden fetishes and sexual desires once thought unnatural, disordered, and wrong.  Without roadblocks in this parade, the march will continue toward "liberation" from "repression" every sexual act and desire once thought perverse.

When I thought I had outsmarted the system in my record deal, I ended up finding that my mother was there to cut me down a size, teach me a lesson, and remind me that knowledge was not necessarily freedom.  I pray today for parents who will rise up to combat the press toward pedophilia becoming not a crime or a disorder but merely a sexual orientation.  It appears that the educational elite in America have already decided what they think should happen.  Let us hope that there are people who will challenge this so-called "enlightened" viewpoint.
Posted by Pastor Peters at 6:00 AM


Hi, I hope you have a good day. Thank you for inspiring us. You bring joy to our face.

I am very happy to locate your website. I just wanted to thank you for the time you spent on this great article. I definitely enjoyed reading it and I have you bookmarked to check out new stuff you post.