Archbp Welby has too much time on his hands. . . 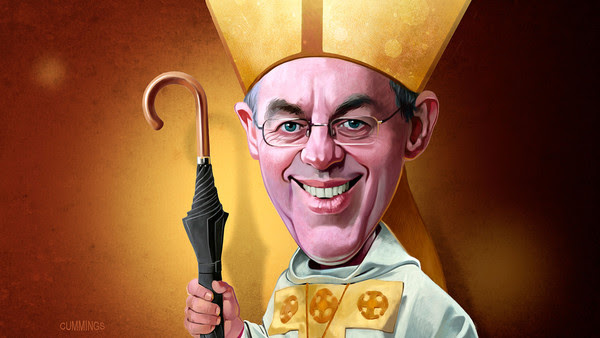 [Archbishop of Canterbury] Welby casts out ‘sin’ from christenings: Centuries-old rite rewritten in ‘language of EastEnders’ for modern congregation... Parents and godparents no longer have to ‘repent sins’ and ‘reject the devil’ during christenings after the Church of England rewrote the solemn ceremony.
The new wording is designed to be easier to understand but critics are stunned at such a fundamental change to a cornerstone of their faith, saying the new ‘dumbed-down’ version ‘strikes at the heart’ of what baptism means.

In the original version, the vicar asks: ‘Do you reject the devil and all rebellion against God?’  Prompting the reply: ‘I reject them.’ They then ask: ‘Do you repent of the sins that separate us from God and neighbour?’, with the answer: ‘I repent of them.’  But under the divisive reforms, backed by Archbishop of Canterbury Justin Welby and already being practised in 1,000 parishes, parents and godparents are asked to ‘reject evil, and all its many forms, and all its empty promises’ – with no mention of the devil or sin.

The new text, to be tested in a trial lasting until Easter, also drops the word ‘submit’ in the phrase ‘Do you submit to Christ as Lord?’ because it is thought to have become ‘problematical’, especially among women who object to the idea of submission.  The rewritten version – which came after reformers said they wanted to use the language of EastEnders rather than Shakespeare in services – is designed as an alternative to the wording in the Common Worship prayer book, rather than a replacement.

But insiders predict this draft will become the norm for the Church’s 150,000 christenings each year if, as expected, it is approved by the General Synod. It may discuss the issue as early as this summer.  But the idea has angered many senior members of the Church, who feel it breaks vital links with baptisms as described in the Bible.

Writing in The Mail on Sunday, former Bishop of Rochester Michael Nazir-Ali said the reform should be scrapped before it further reduced Christianity to ‘easily swallowed soundbites’. And one senior member of the General Synod, who did not wish to be named, said: ‘This is more like a benediction from the Good Fairy than any church service.

Somebody should spend a bit more time seeking to faithfully preserve the faith and less time considering how things might be misunderstood by folks intentionally looking to misunderstand them...  Lord preserve us from those who are offended by the faith!
Posted by Pastor Peters at 6:00 AM