It is true only if everything is sexual. . . 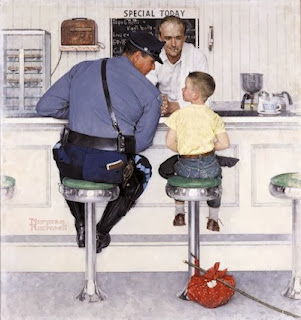 It seems that we know nothing at all about somebody until we know every possible sexual thought and desire.  Biography has gone from the subject of the person to the lewd and often crude presumption of the sexual thoughts of the person.  Such sensational biography has become the staple of the way we dissect figures of note.  It is shameful what is done and shocking how innuendo and rumor are used to defame the dead.  Once the specter of a dark and perverted sexual desire is raised, it seems impossible to put the genie back in the bottle.

Deborah Solomon has written a 512 page "biography" of Norman Rockwell that has done just that -- let a dark genie out of the bottle and no amount of truth will put it back.  Rockwell is one of America's most beloved illustrators and painters -- a recent auction of his Saying Grace brought a record $46 Million!  Yet Solomon's most notable achievement in her book is to defame the character of Rockwell with baseless charges of pedophilia and perverted sexual desire.  There is no evidence and no substance to these charges but only the suspicious mind of the author of this so-called biography who presumes that everything is sexual.  Solomon insists that Rosie the Riveter is masturbating and soldiers are homosexual and dozens of other completely outlandish and false interpretations of Rockwell's famous works.

My point here is not to refute Solomon.  Others can do a fair enough job of defending Rockwell against these crazy charges.  My point is to show how everything has become sexual in our modern culture.  We define ourselves by sexual desire, we use sex to buy and sell merchandise, we protect pornography and refuse to allow religious free speech, we insist upon condoning and accepting every past perversion as the sexuality du jour...  Wasn't it CS Lewis who said that absent God, everything becomes sexual?  We are not waiting for this to happen.  It has arrived.  Everything has become sexual.

Lewis again:  They tell you sex has become a mess because it was hushed up. But for the last twenty years it has not been. It has been chattered about all day long. Yet it is still a mess.  If hushing up had been the cause of the trouble, ventilation would have set it right.  But it has not. I think it is the other way round. I think the human race originally hushed it up because it had become such a mess.  Indeed, it is not hushed up.  Everything is sexual and sex has become that which defines and consumes us as a people.  Are we better off?  Have things improved because of our openness?  We cannot talk about God in the public sphere but there are no limits to the sexual conversation and images in the public sphere.  As Solomon proves in her so-called biography of Rockwell, even the dead are not immune from our voyeuristic pursuit of everything sexual.


The charge against Christians is that they are preoccupied with sex.  It is ridiculous.  Lewis:  "Our warped natures, the devils who tempt us, and all the contemporary propaganda for lust, combine to make us feel that the desires we are resisting are so “natural,” so “healthy,” and so reasonable, that it is almost perverse and abnormal to resist them. Poster after poster, film after film, novel after novel, associate the idea of sexual indulgence with the ideas of health, normality, youth, frankness, and good humour." [Emphasis added]

We repress nothing at all and we suppress nothing at all.  That does nothing to make us nobler but instead diminishes the character of our lives and our very identity as human beings is made captive to one desire.  The call of the Church is not to repress but restrain this desire -- indeed any desire that would threaten us by unleashing it from every aspect of judgement or self-control.  When everything is sexual, nothing is.  This does not free us to love but makes this love unattainable.  The chaste are not unaware of sexual desire but, as Lewis suggests, those who know it best of all and yet without the blinders of desire that would mask its gift and purpose.  Just because we have appetites does not mean that satisfying them is good.  Even if we label the appetite natural it does not allow us to satisfy it with impunity.  When everything becomes sexual, nothing is sexual and love becomes an afterthought.  Far from being repressive, the call of the Church is the most liberating of all the voices.

For more on the deceptive and mistaken "biography" of Rockwell, read here...

I don't want to say this is one of the best articles you have written, because you write so many good ones, but this is clearly outstanding. The Lewis quotes are superb. He had such a brilliant mind. I was particularly struck by his reference to food. It is something I have also seen in our culture - sex, anyway you want it is OK, but having a little extra weight is not and is something we should be ashamed of. The concept of controlling the passions is foreign to our culture unless we are talking about something that impacts the way we look. Crazy...

There is a long history of leftist bilge produced by the fifth-column New York Fishwrap of Record's media skank, Deborah Solomon.