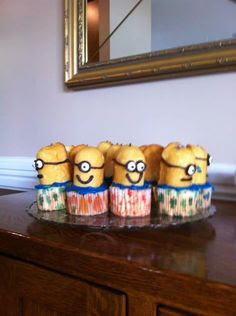 We have all heard the sad story of an iconic American brand that ended in bankruptcy.  Such seemed the fate for the Twinkie a year or so ago.  Then the Twinkie came back minus the Hostess company that made this dream cake famous.  A box of 10 reborn Twinkies will cost $3.99 and, contrary to popular myth and legend, they come with a 45 day shelf life.  The sugary treat that Americans once consumed in massive quantities is back in the saddle again without much change and no healthier than before.  To increase its appeal, the new owners have shifted the distribution strategy to bring the tasty treats to more convenience stores than was possible before.

What is gold on the outside and white on the inside?  A banana might be the answer and it would be healthier than the Twinkie but we all know that the Twinkie is king of the sweet snacks -- fresh out of the wrapper, stale from sitting on the shelf a while, battered and fried, or however else you might serve it!

Unfortunately the Twinkie Church is also just as popular.  It is sweet and sugary, filled with calories that satisfy the taste but give the body little of real substance.  We seem doomed to a Christianity tempered with Twinkie Church, a Gospel-lite that is heavy with sentiment but empty of real talk of sin and death, the cross and repentance, forgiveness and new life.  It is not that the gospel packaged as a sugary treat does not sell -- it does!  The point is whether or not it is the real Gospel at all.  Jesus said to beware of gaining the whole world and losing your soul.  Christianity struggles with these words -- more today than ever before.  We want to be successful and we don't have much patience left to wait upon the Lord to work.  So, like Abraham and Sarah before us, we have substituted our own game plan for the work of the Kingdom.  No church body is completely immune from this temptation.  Rome had its Vatican II and Orthodoxy has its Western Rite Eastern churches (oxymoron?).  Lutherans have folks marching to the beat of the Rick Warrens, Bill Hybels, Mark Driscolls, and Joel Osteens.  Twinkie Church is not in retreat but advancing along all the lines of Christianity.

We live in a world in which we do not want to eat our dessert first; we want to eat only the dessert.  We are starving the church and Christians by feeding them food that has no food value, that cannot sustain their faith in the reality of Christian life in a world unfriendly to the faith, and that will end up rotting our insides.  The answer, however, lies not with the Law but with renewed preaching of the true and authentic Gospel.  Instead, churches unwilling to sell their souls to this devil have sold an extra arm or leg or hand with blended services and blended sermons that attempt to mirror the best of both worlds (while being true to neither).

Rules will not kill the sugar addiction and the Twinkie Church will not disappear because it no longer appeals.  Rather, our taste for sentiment over truth and our reinvention of the church as a me centered community will only be overcome by renewed faithfulness -- preaching the Gospel of the cross with renewed passion and practicing renewed catechesis for all ages.  As has been shown in study after study, the Twinkie Church appeals more to Christians than those outside the Church and instead of reshuffling the cards what we need to do is to concentrate on passionate preaching of the cross and intentional catechesis.  Eventually the Twinkie Church will fail to live up to its promise and people will come looking for something real and solid.  It has already happened to many here in my town.  It will happen to you.

Do not despair, faithful Lutheran pastors and people.  Do not lose heart.  Do not give in.  The temptation is great and it has always been but the Gospel is worth nothing less than our best.  The means of grace have the promise of God.  Worship which is centered in the means of grace is the path of the future as it has always been.  The once and future church is not the invention of the moment or the abdication to culture and personal preference but the faithful proclamation of the Cross.
Posted by Pastor Peters at 6:00 AM

Your post as a whole is spot on. However, to compare the Western Rite Orthodox (WRO) Churches to the Twinkie Church really isn't fair. You may disagree with the WRO concept but it isn't anything like Joel Osteen and other shallow, self centered evangelical groups.

My impression of the Eastern Churches that fall under the Roman Catholic Church do not reflect Twinkies in any shape, manner, or taste.

The Twinkie church may be comparable to it's namesake. However, it too will suffer the fate of Hostess. It will bankrupt itself (monetarily) because it is the most expensive 'model' out there. (An aside: Churches with liturgy, vestments, orchestras, etc. aren't NEARLY as costly.) Currently the multi-site is it's newest effort to stay afloat - an overblown shell game.

The unfortunate thing is people have itchy ears. As long as that is true, the Twinkie church will keep coming back in new incarnations.

This is more than just sad, because they are sending some people merrily on their way to hell, thinking they're Christians.

No, but it represents a choice of user preference over the church as it is and while this is not the same as the other twinkies named it is still an accomodation that is a distinct break with the orthodox church.

I forgot to note my comment above was about the western liturgy orthodox churches. sorry