Make Disciples. . . or Make Ourselves Attractive. . . 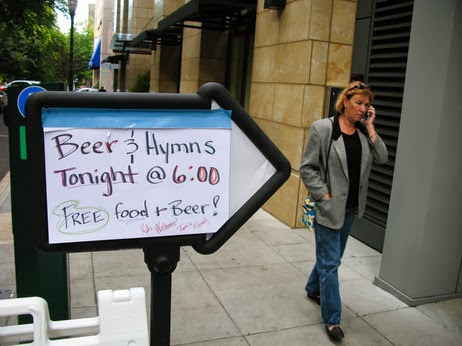 For too long the old liberal idea of Christianity as frosting on the existing culture cake of the nations has been promoted as evangelism or evangelization or outreach.  The idea is that the Christianity is without a culture and can be applied to any and every culture.  Worship is supposed to reflect this diversity of cultures and owes something to the particular nation, culture, and ethnicity of the people.  Good worship therefore reflects the culture of the people being evangelized.  This gentle style of outreach has long been promoted by those who regret and repent of the past when Christianity challenged the local culture and had the nerve to suggest that the Gospel does not merely add something to what is but is a radical rebirth and new direction.

Jesus did not send forth His disciples to make the idea of faith attractive but to make disciples of all nations, to bring them from the many cultures, races, ethnicities, and nations into the one Church with its own unique culture that transcends all that distinguishes and divides us on earth.  The Church attracts and “retains” people only when she disciples them.  We do not accomplish anything by simply making ourselves attractive to those outside our boundaries.  It is a never ending task to keep ourselves attractive to a people whose heart is not in it, who do not really want to be there.  I might compare it to a marriage in which the groom has a wondering eye, does not have much of a commitment or deep connection to the bride but will stay in the marriage as long as she does what he wants, meets his needs, and keeps herself attractive to him.  That is exactly the problem of cultural Christianity.  It is in a never ending pursuit of attraction to a people whose heart remains elsewhere and who have never been catechized or discipled into the life of the Church.

If the Church is losing people, there are many small factors that certainly contribute but the primary issue is that lack of discipleship, the failure to catechize, and the fact that those folks were not incorporated into the sacramental life of the Church and into the Word of the Lord.  While this is certainly the fault of the Church, it is also the failing of the family where faith is not nurtured, where its value and priority are not affirmed, and where parents are not modeling the faith before their children.  Unless I am terribly wrong, I do not recall much from the early church on retaining members (especially at a time of persecution and trials).  Instead, the Church assumed retention and expected service, a radical life of sacrificial service on behalf of the poor, the sick, the widowed, the orphaned, etc...  I wonder if there is any correlation to the lowered retention rates and our shift to a consumer style religion and church in which the individual is at the center and the focus is on the wants, needs, and desires of the individual?

Intermarriage was not always the problem.  The Christian brought his or her non-Christian spouse to the Church and catechesis inculturated the one without faith into the faith and the life of the Church.  Now it seems that intermarriage contributes more to the loss of the Christian than it does to the conversion of the non-Christian.  In addition, I have encountered dozens of twenty-somethings whose parents, supposedly Christians, decided that the better part of valor was to raise their children without a faith so that they might choose a faith for themselves as mature individuals.  In every case the child suffered from this flawed nobility on the part of a mom and dad who should have brought them to baptism and raised them in the faith and in the life of the Church.  This failure was their shame as they sought to become part of the Church and live within the creedal faith, assuming that they were the odd balls who had not been in this since childhood.

Fixing the Church is decidedly easier than fixing the family although both are difficult.  If we are to start, it must begin with ending our relentless preoccupation with making the Church relevant and the Christian faith attractive.  This is the Spirit's work.  What we are given to do is to be faithful -- faithful in the proclamation, faithful in the worship, faithful in the catechesis, faithful in the piety, and faithful in the family.  Attractional Christianity is a bottomless pit that presumes culture is neutral, that faith is not essential, that discipleship is optional, and that grace is merely beneficial instead of the radical shape of faith and life presumed by the Scriptures and tradition from earliest of days.
Posted by Pastor Peters at 6:00 AM

And how many parents decided not to tell their children to "look both ways" before crossing the street, that cars could kill? If there are/were any such parents, I suspect that when their child was injured or killed, they'd be arrested.

I am now a Lutheran (and both glad and proud of it), but I am thankful for the childhood catechesis that taught me the shape and form of Scripture. It wasn't always Lutheran; it wasn't always right, but it has placed me in good stead to understand why I am Lutheran now.

So why would any Lutheran parent leave this to 'chance?' There is no chance; left to our sinful selves there is only unbelief. Hearing is the sense of faith; seeing, doing, etc. will not bring faith. Only good catechesis (lifelong hearing) feeds our faith.

I respectfully disagree with your basic premise that Christianity has no culture. It's culture is the culture of the Kingdom of God. When this culture is abandoned everyone does what is right in their own eyes and the "churches" then reflect the culture of a fallen and depraved world.

But that is exactly what the Pastor said -- Christianity is not cultureless but has its own culture of the Word and Sacraments and the life that constantly flows from them and back to them.