Not much happiness among the gay 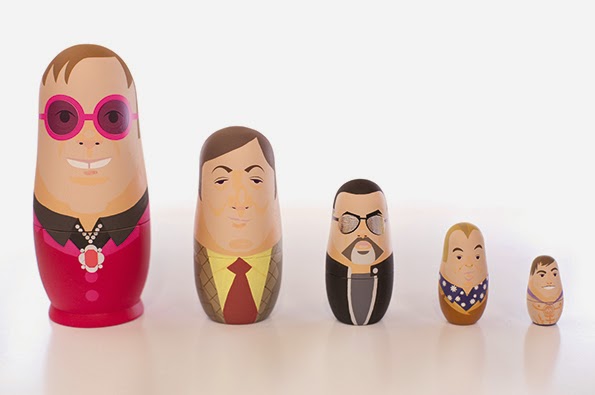 You might think that GLBT folk would be, well, gay!  After all they have succeeded in transforming public opinion, turning the tide for gay marriage, breaking through nearly every barrier of business, industry, and government (even sports), and entering the mainstream.  But apparently there is little happiness among the gay.

They made sure that Duck Dynasty folks got their comeuppance.  They forced a photographer to pay a fine for not wishing to have a GLBT couple as a customer.  They have succeeded in ejecting a CEO from Mozilla.  But they are not happy until everyone who does not agree with them gives up.

A group that cries for tolerance but which is itself rigidly intolerant of dissent.  Hmmmm....  Is that not what the Christians are accused of?  It would seem that the gays are not happy at all -- even with their successes.  They will be no gaiety in the houses of the GLBT until everyone agrees with them.  There are other groups who have acted this way in the past and still but we call them bigots.  You can disagree with the GLBT positions but you cannot serve in business, industry, sports, media, or government.  In fact disagreeing with the GLBT lobby is grounds for disqualifying nearly everyone from the public square in America.  How is it that we call them a minority?

According to Jeffrey Levi, former executive director for the National Gay and Lesbian Task Force, “We [homosexuals] are no longer seeking just a right to privacy and a right to protection from wrong. We have a right—as heterosexuals have already—to see government and society affirm our lives.” Homosexual author Urvashi Vaid declared, “We have an agenda to create a society in which homosexuality is regarded as healthy, natural, and normal. To me that is the most important agenda item.” Paula Ettelbrick, former legal director of the Lambda Legal Defense and Education Fund, stated: “Being queer means pushing the parameters of sex, sexuality, and family, and . . . transforming the very fabric of society. . . . We must keep our eyes on the goals of providing true alternatives to marriage and of radically reordering society’s view of reality.”
Posted by Pastor Peters at 6:00 AM

This is not the primary reason there is no gaiety among the gay. To be truly gay, in the classical sense of the word, is to be happy. There can be no true happiness in a lifestyle that is focused on self-seeking, sexual promiscuity, and a denial of God.

Even if the LBGT folks persuaded 99% of the population to agree with them, such that they got their way in every one of their demands, they would not be happy. They cannot be happy.

Look where their focus in life is: seeking sexual pleasure through as many different sexual partners as they can manage. How can this possibly lead to happiness? The only thing they have to give to another is AIDS, which is hardly a gift!

OK, I am "gay" and Christian. I believe the Bible says sex is reserved for marriage between a man and a woman and so, at age 15, i chose celibacy. I am now in my fifties.

Guess what, in spite of the fact that I am repentant and trust in Christ alone for salvation and am a 50 year old virgin - I have not be "happy" for nearly 40 years. Why?

How would you feel if you and your wife went to a church one day and were greeted by a pastor who said, "I see you are a married couple, well truth compels me to let you know that sexual lust for anyone other than your wife is a sin. Christ did forgive you but don't go thinking that His forgiveness gives you permission to commit adultery and as long as you promise never to commit adultery, I guess you can be part of this Church - only please don't serve on any boards because we don't want anyone who experiences sexual temptation to have a bad influence on our children."

Now some of that you need to hear sometimes (like when the pastor preaches on Matthew 5) but if that was the ONLY way you ever heard the forgiveness of Christ addressed to you, you probably would find it hard to be happy.

Well guess what, that is about the only way the Church ever offers people like me forgiveness - by constantly qualifying it, as if 40 years of virginity since puberty were not proof that I believe God's Law is good and have no intention of using forgiveness for sexual license.

So maybe before you talk about how "sad" gays are, you need to ask whether the Church is doing any better.

I stay in the Church because it is where the office of the keys is located. And I believe Christ forgives sin. But there is no forgiveness from Christians. I gave up on hoping to hear that long long ago and have seen nothing in recent years to change my mind.

So, God saves all "straight" people by grace alone, but "gay" people can only be saved as long they remain celibate? Wouldn't this make their salvation based on works? Interesting, especially for Lutherans. And, regardless of where one stands on the issue, a statement such as, "The only thing they have to give one another is AIDS, which is hardly a gift!" (Fr. D) is repugnant and un-Christian.