Source of Converts to Roman Catholicism. . . 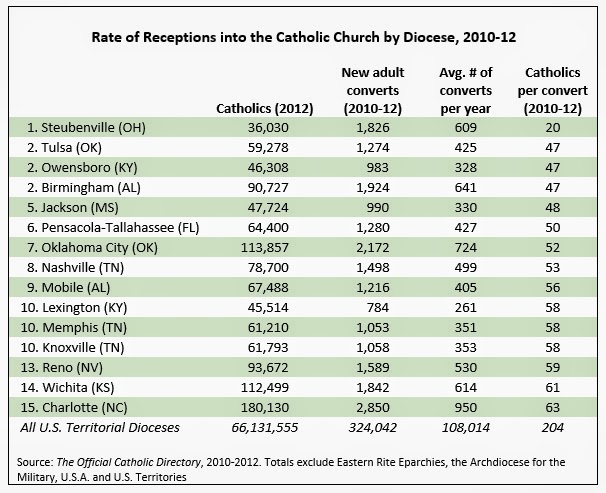 Interesting, to say the least!  It would seem that of the top 15 dioceses receiving adult converts to Roman Catholicism only a few are outside the South.  Now that is a surprise!  Perhaps no other region has historically been so unfriendly to Roman Catholicism but it seems that they are not only the top dioceses for adult converts, they represent a very high percentage of converts within the population of these missionary dioceses.

I note that three are from Tennessee (Nashville, Memphis, and Knoxville) and all are relatively small dioceses when compared to the big horses of Brooklyn, NY, or Boston, for example.  None of the three Tennessee dioceses have more than 100,000 Roman Catholics and the average is about 67,000 for those in this table.

So what does this tell us?  It tells us that smaller dioceses tend to be on the growing edge of the faith, that converts tend to produce more converts, and that this often goes square against the prevailing notions of where this growth ought to come.

I would venture to say one thing to those who say you cannot do liturgy and grow the church in the South -- look at the numbers!!  Lutherans in the South who act like their fundamentalist or evangelical neighbors are not necessarily offering the unchurched much of a reason to convert to Lutheranism.  On the other hand, when Lutherans get over their own insecurities and begin acting like their confessions, they may find that being distinctive actually helps the mission!

Of course there are those who will argue with me and say that these statistics say something else...  All I can say is this.  We have tried everything else, why not give acting like the Lutherans we say we are... what could we lose???
Posted by Pastor Peters at 6:00 AM

Amen. And let's go back to doing one Divine Service per Sunday with lots of Liturgy!

And being less critical of all things non-Lutheran!