Fluff without much real stuff. . . 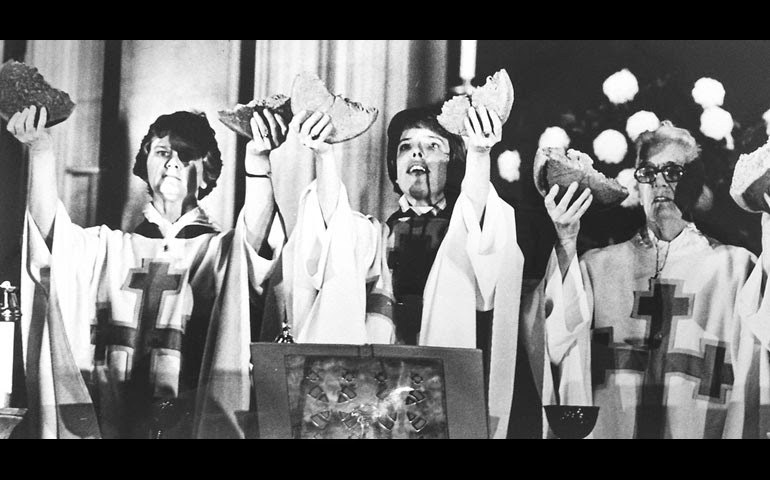 It has begun.  The first ordination of a woman as a priest of the Episcopal Church is being recalled with some creative memories.  The fact that the first women ordained were ordained illicitly, without sanction from the ECUSA, and were, in fact, an act not of prophecy but of rebellion has been conveniently overlooked.  The so-called evidence of women serving in the early church is conveniently vague and without serious review as to the circumstance or instance.  The reference to Orthodox ordinations of deacons is likewise non-specific. The reference to "civil rights" is dismissed as an unfair criticism yet the theological justification for the ordination of women is not even mentioned.  Again, God's call must trump Scripture, tradition, and all order or else the work of the Spirit is being stifled.  It is all quite familiar but, like the lies we tell ourselves over and over again, none of it constitutes truth or anything more than a creative view of history -- and then only a short period of history!  Perhaps the most scandalously humorous assertion is that determined historians have provided justification and precedent for such radical action -- determined to be what? anti-history? creatively historical? blind to the clear and unbroken historical witness of Scripture and tradition?  And of course it all ends with the challenge to test the spirits  and see the wonderful fruits that the ordination of women has brought to the ECUSA and to Anglicanism as a whole... Yes, what fruits!  Division, erosion of membership, adoption of GLBT agenda, general doubt or contraction of what Scripture says and tradition affirms with respect to just about everything except a radical social agenda -- all things that also happened during the past forty years of women's ordination.  I do not blame the women for these but surely it is not too far from the truth to tie these all together as a mindset, oblivious to Scripture and tradition, that contributed mightily to the slow and painful death of a once noble church body.

"Perhaps the most scandalously humorous assertion is that determined historians have provided justification and precedent for such radical action -- determined to be what? anti-history? creatively historical? blind to the clear and unbroken historical witness of Scripture and tradition?"

Determined to find what they want to find, when it's not there, and willing to distort the truth when they can't find it.

TEC abandoned the Gospel long ago and can only be described as apostate. There are some faithful local congregations, but they can only exist in isolation for so long. The abomination of a service in the link you posted is nothing more than the worship of man and man's obstinate declaration, "not thy will but mine be done." Especially noteworthy and sad that, in their opening "hymn", they replaced the traditional words to the tune "Nettleton" (associated with the Gospel-saturated hymn "Come Thou Fount of Every Blessing") with the humanistic nonsense: "Sing a new church into being..." These words are their marching orders. Fashion a church after our desires, regardless of what Scripture teaches. Not a surprise because TEC made it clear years ago its ideology takes precedence over Scripture. They worship the creature rather than the Creator.

"Determined to find what they want to find, when it's not there, and willing to distort the truth when they can't find it."

The bottom line is that they are liars lying.