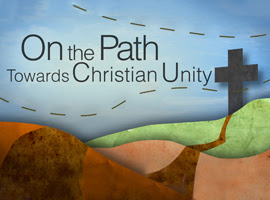 Strange how the same voices who argue for ecumenism are also those who often argue for the ordination of women and the full acceptance of homosexuality.  It is a strange ecumenism, to be sure, that finds nothing substantially preventing full communion -- not even issues of doctrine and faith -- but such ecumenists find themselves stymied in their endeavor to find common ground -- undone by their own very sectarian actions.

Consider the majority of members of the Lutheran World Federation and the Evangelical Lutheran Church in America.  Both have succumbed to the pressure to adopt the official position of feminism with regard to women and the church.  Both are decidedly in the camp of those in favor of gay marriage, the full acceptance and incorporation of gay and lesbians into the life and ministry of the Church, and yet both are surprised that this is a problem for the main ecumenical conversations (with Rome and Constantinople).  What did they think?

It is the sex problem that has halted the progress of the ecumenical agenda of so many Lutherans.  Metropolitan Hilarion summarized the problems at play in Orthodox-Lutheran dialogue in an interview with Der Spiegel. “Many Protestant churches have liberalized their notions of ethics, giving a theological justification to homosexuality and blessing same-sex couples,” he said. “Some refuse to consider abortion to be a sin. We do not share the understanding of the Church and church order, especially as the Protestants, unlike the Orthodox and Catholic Churches, ordain women.”

This is echoed by Roman Catholics who have viewed the Lutheran-Roman Catholic dialogues as some of the most productive conversations -- but to a point.  That point being the decisions along the way by Lutherans to depart from historic Christian practice and ordain women (in the US 1970 and in Sweden 1958) and to incorporate the full compliment of gay and lesbian relationships into the life of their churches (2009 for the ELCA).  The conversations were to have reached a peak in the 500th Anniversary of the Reformation in 2017 but it seems that instead the conversations have come to a halt.  There is no detour around the roadblock of the ordination of women and the full incorporation of gays and lesbians into the life and ministry of the church.

The point is this.  Those churches who have fully embraced the feminist and gay agenda have acted in a sectarian manner.  This sectarian choice to depart from historic Christian teaching and practice has consequences.  For the ecumenical dialogues, the consequence is pretty much an end to the conversation.  Rome and Constantinople are not heading in this direction anytime soon (probably never).  So what will will become of the ecumenical movement undone by its own progressive voices acting unilaterally?  The only fruitful path will be for Orthodoxy and Roman Catholicism to pay more attention to the Confessional Lutherans like the LCMS.  The many liberal members of the LWF and the ELCA will have to content themselves to their ecumenical relations with churches that do not care what you believe, how you practice, or what you say -- as long as you do not violate their politically correct "prophetic" positions on women, gays, and lesbians.

What a sad end to what could have been a very significant and fruitful conversation!
Posted by Pastor Peters at 6:00 AM

You speak of Orthodoxy as though it is represented by Constantinople. Constantinople no longer exits. It is Istanbul, Turkey and Orthodoxy no longer exits there. There may be one or two thousand there who still profess to be Orthodox but the Patriarchs there have consistently betrayed the Orthodox Faith and can no longer be considered Orthodox. You can't be an unorthodox Orthodox. The true Orthodox Church today does not exist in the so-called "official" Church. It exists among those bishops who have separated from the "official" and who still hold, believe and practice the Orthodox Faith. The Orthodox Church is not an organization or denomination but the mystical body of Christ who holds the apostolic faith unchanged.

Justifying sexual sin as a virtue, promoting homosexual acceptance, advancing feminist philosophy, denying the immorality of abortion for convenience, as some progressive Lutheran theologians presently do, is like putting a new coat of paint on an outhouse. It may have a new paint job, but it is still an outhouse, nothing more, nothing less.

"The only fruitful path will be for Orthodoxy and Roman Catholicism to pay more attention to the Confessional Lutherans like the LCMS." Yeah. That'll happen.

"The only fruitful path will be for Orthodoxy and Roman Catholicism to pay more attention to the Confessional Lutherans like the LCMS." Perhaps. But this seems unlikely since the Book of Concord calls the pope the antichrist.

I'd argue greater ecumenical dialogue is more likely between Continuing Anglicans and the Orthodox and RC churches. (And I am not referring to the Church of England or the Anglican Church of North America. The former ordains women and the later can't make a decision on whether to ban or accept WO).

"The Orthodox Church is not an organization or denomination but the mystical body of Christ who holds the apostolic faith unchanged."

Dear Joseph Bragg, While this is true for all of the Christian Church, I'm not sure what you mean when you say: "The true Orthodox Church today does not exist in the so-called "official" Church." Are you meaning that there are no more ancient governing "roots" that govern any Orthodox bodies?

The Antiochian Orthodox Church is still connected to Antioch and the Patriarch there. In fact, after three Priests were elected by Orthodox priests in North America this summer -- the three names were sent to Antioch for the final decision as to who would be named the new Metropolitan for the North American Antiochian Church.

"Venerable Hierarchs, Brother Clergy, Esteemed Members of the Board of Trustees:

Christ is in our Midst!

It is with joy that we confirm the election of Archbishop Joseph by the Holy Synod of Antioch to be the new Metropolitan of the Archdiocese of New York and all North America."

The Antiochian Orthodox Church also has taken a strong stand on the matter of "same sex marriage."

I too have wondered why this particular Church body does not talk to us in the LCMS because they love to convert us if they can! (Some of our Pastors have become Priests.)

If I am not mistaken, the headquarters of the Antiochian Orthodox is now located in Damascus, Syria, rather than in Antioch.

You wonder why the Antiochians do not come talk to the LCMS? There is stunningly little in common, so why would you expect them to do so? One of the largest Antiochican parishes is located near my home. They are mostly former Anglicans and worship with the American Missal, an Anglican form, complete with bells, incense, processions, etc., all things that would scandalize most LCMS.

Fr. D, Yes, the Antiochians do look down on us (LCMS) for the most part. We have many differences. But the big one they point out is our doctrine of Justification. Christ's work on the cross for our forgiveness is not enough -- Alone. They subscribe in part to a "ladder" theology. (Saint John Climacus -- http://en.wikipedia.org/wiki/John_Climacus )

Another, they don't understand how we can be so divided over "high"church/"low" (contemporary) church. The Orthodox priest I know said "you will never see a praise band in an Orthodox church." To which I said, "Thank the Lord." The LCMS system is, now, seemingly a 2-party entity with Pastors/churches believing that they are completely autonomous and they can do whatever they want. However, every church/Pastor is supposed to subscribe to the BoC. Whereas the Orthodox are governed under a hierarchal system but without a Pope like the RC.

Like I said, they love to convert LCMSers. The priest I know has invited me to email him once a week with any theological questions that I have -- because whenever I am with him I hit him with one or two and he always graciously answers me (we've known each other for years).

So, I say, what is the harm in talking? What harm would there be in knowing each other better? Just like with the Roman Catholics, there are areas where we do agree and could have a kind of loose coalition so to speak. But, maybe that exists already.

Anyway, I'm only a layman. These are just my thoughts.

. . . One other thing, if the Orthodox were already willing to talk to the liberal branch of Lutherans, why would they not be willing to at least look our way and engage in the same kind of discussions?

. . . As far as location in the Middle East for the Patriarch, all I can find is Antioch. That is what correspondence says.

Fr. D, you are correct, it is located in Damascus, Syria. I was always thrown off by their use of Antioch.

Since this is not the proper forum to discuss Orthodoxy I will be brief and leave it at this. The notion that we must be in communion with some Patriarch even when the Patriarch preaches heresy is a RC notion that is foreign to Orthodox saints, confessors, martyrs and canons. If you are sincerely interested in what I meant you can learn more here http://www.hotca.org/orthodoxy/orthodox-awareness/236-why-the-true-orthodox-are-truly-orthodox

Dear Joseph, Thank you for the info, I will look at it.

However, I was not intending to get into a discussion about "Orthodoxy." In my typically round-about fashion (where my intent probably gets lost), I was attempting to agree with Pastor Peter's statement:

"The only fruitful path will be for Orthodoxy and Roman Catholicism to pay more attention to the Confessional Lutherans like the LCMS."