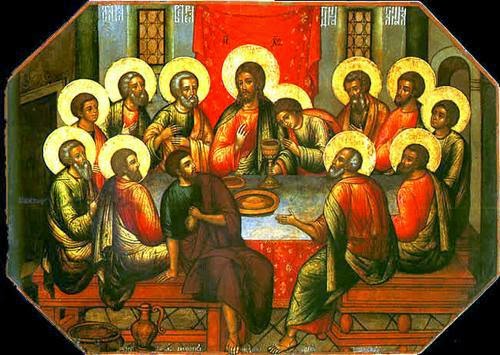 Augustana XXV...  In defense of what has come to be called either closed or close communion, the Lutheran Reformers insisted in the Augustana that they retained the apostolic "custom" of examination and confession [and absolution] before the communicant is given the body and blood of the Lord.  As solemnly as this Confessions insist that the Lutherans teach this "with the greatest assiduity," Lutherans today largely ignore their own Concordia.

A million years ago when I went off to college 450 miles away from home, my pastor gave me a communion card for my wallet -- to be presented wherever I might go to commune to show that I was indeed a member in good standing at an LCMS congregation.  Never mind the obvious incongruity of sending a college student out to an 18 age drinking state for college and still remaining in "good standing," the intent was pious and salutary.  I used the card often (though the norm then was no more than a monthly celebration of the Sacrament of the Altar so it was not used as often as one might think).  Nearly all our LCMS parishes (and many other Lutherans as well) practiced the discipline of the Lord's table.

The inherent weakness of the communion card was the fact that closed communion never was predicated upon membership but on faith and confession.  In other words, closed communion was never about a membership card but about examination and confession and absolution.  We still struggle with this disconnect from the practice assumed by our Confessions.  We speak of closed communion in terms of which church bodies we are in fellowship with (not that this is, in and of itself, bad) but not in terms of the communicant being examined, his confession heard, and absolution rendered.  We commune those from congregations with whom we are in formal altar and public fellowship and not communing those from heterodox churches -- and so we should -- but this is not what the Confessions have in mind.  This is not the same as examining and absolving those who desire to receive the Lord's body and blood. A side benefit of this was that the Pastor knew how many hosts to put out because he knew how many he had examined and absolved before the mass.

I honestly grow weary of the way close(d) communion is debated today.  It is a fools errand on both sides to move the fence in or out (or as the ELCA is doing, remove it all together).  It ought to focus upon the communicant, upon examination of the communicant, the confession of the communicant, and absolution of the communicant.  Until this happens the whole darn debate will sound like the rudeness of some to exclude and the lack of love on others to include those who cannot receive it to their benefit (no baptism or faith).  It trivializes what St. Paul speaks so solemnly of in discerning and recognizing the body of Christ.  I honestly wish that the whole focus of this debate were framed back where our Confessions insist it ought to be -- on the examination and confession [and absolution] before the communicant is given the body and blood of the Lord.  Apart from this context, the whole thing is just plain obtuse to most of us.
Posted by Pastor Peters at 6:00 AM

So unless a pastor hears the private confession of a communicant prior to each Communion that person should not be communed? To do so would make that pastor/congregation/synod non-confessional. The LCMS is clearly a non-confessional church.

This would require the pastor to be involved in the lives of the congregation. Maybe that's why the argument is reframmed, to avoid this inconvenience.

"...closed communion never was predicated upon membership but on faith and confession." I can scarcely believe that you wrote that, Pastor Peters. That I could agree with, but I have been told by numerous LCMS clergy and members that it is ALL about membership.

The sticking point, as I see it is the phrase, "believe the same things we do." I dare say that I do believe the same things that faithful member of the LCMS believe about the nature of Jesus Christ's sacrifice on the cross, the reality of His presence in the Communion elements, and a host of other theological concerns. My views of the sacrament are at least as high as any I have ever heard expressed by the LCMS. I disagree with the congregational polity of the LCMS, the way that the theology changes whenever Concordia Pub. house decides to put out a new hymnal, and hence a new version of the service (Lex Credendi, Lex Orandi).

No, I think it is ALL about membership. To make it about belief would be simply too messy, too demanding, too difficult, for the typical pastor and parish to deal with. It is easier to tell other to simply drop dead, as I have been told.

Unlike the ELCA where the publishing house DOES put out their hymnal, the LCMS prepares, approves in convention, and publishes its own hymnal internally, CPH takes on only the practical stuffing of getting it on paper, bound, and sold.