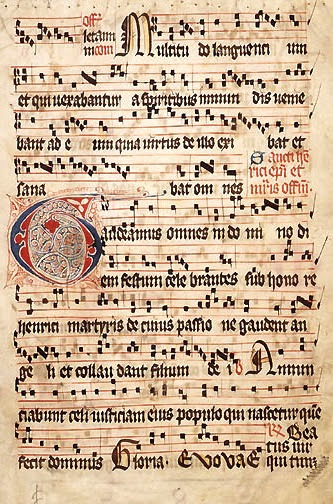 Nothing short of incense seems to raise the hairs on the back of some Lutheran's heads more than chanting.  I have personally known situations in which congregations have organized their opposition and brought up motions to the voters assemblies to formally request their pastor NOT chant -- not quite an order but pretty darn close.  Chant is certainly outside the musical mainstream of today.  Sure, there are folks who do like to listen to chant and the CDs still sell well but why bother when it seems so many are so opposed to it?

Chant marks the space for the holy work of worship.  Even more than architectural design or visual cues, chant has the power to mark the boundaries of sacred space.  It is a marker which is not laid down to be seen by the eye but heard with the ear.  I think of how it works in my own parish.  We share the peace immediately after the absolution -- connecting this peace of the Lord received in absolution with our peace one toward another as the people of God in this place.  I have written about that before.  As the peace is being passed -- always and noisy and disorganized movement of people in and out of the pews -- the organ intones the Entrance Rite (Introit, Entrance Hymn, or Kyrie).  In the waning din of the peace being passed, the sound of a single voice chanting breaks through the activity and signals very clearly that the peace is over and we are now into the Liturgy of the Word.  Without a single direction or announcement from the presiding minister, the whole congregation is brought together to the same page, the same moment, and the same purpose.  Such is the power of chant to mark a space.

Chant marks the text for the holy work of worship.  The spoken liturgy sounds the same -- subject to the particular inflection of the voice or reading skill of the one leading it.  Chant marks the text as sacred, taking the text out of the realm of casual conversation or lecture and marking it for the holy purpose of worship.  The differences in tone and chant communicate a great deal to the people.  So, for example, one of Luther's reforms that we miss entirely today was the direction to chant the Words of Institution to the same tone as the Gospel was chanted.  This musical notation was not without significant impact upon the hearer who immediately identified the Words of Institution with the voice of Christ in the Gospel and the Sacrament of the Altar as Gospel itself.  In the same way, chant takes text and marks its identity and purpose within the sacred context of the liturgy.

Chant marks the action of the words. Just as the tone has movement, so does that movement both mirror and describe the movement within the text.  Again, note how in Luther's setting of the Verba the chant clearly distinguishes the description of the action of the Upper Room from the very Words of Christ -- giving attention to Christ's voice and His words as that which is the center of the liturgical action.   In another way, the joyful setting of the Alleluia Verse stands in contrast to the Lenten Verse and so the chant itself works with the text so that both delineate the nature of what is being sung.

Chant is not music to entertain.  Perhaps this is why chant is so misunderstood.  We lump chant in with all over musical tastes and preferences as if it is merely a matter of what touches you on this emotional plane or that.  Chant is not music to entertain.  It is music to communicate.  It aids the actual text both in projecting the voice so that many may be heard and setting aside that voice from the text so that the focus is not on the singer, so to speak, but upon what is sung.  Chant is the voice of worship -- indeed it made it possible for people to learn to sing together so that the many voices may be one and it still sacralizes what is sung, setting apart the word from the casual conversation of the people.  Perhaps no one has fully comprehended the significance upon worship for this movement from largely chanted liturgy to spoken liturgy but the outcome has not been positive for the reverential character of the liturgy.
Posted by Pastor Peters at 6:00 AM

"I have personally known situations in which congregations have organized their opposition and brought up motions to the voters assemblies to formally request their pastor NOT chant -- not quite an order but pretty darn close." That is the definition of pure insanity!

I find that if the service is spoken I need to follow in the hymnal, but when it is chanted all the responses just come to mind and voice naturally. I have always found this fascinating.

Funny how nobody complains about the congregation chanting their portion of the liturgy, but people complain about the pastor chanting his portion. Go ahead, pastors, gladly chant the praise of the Lord. It is heavenly worship for the glory of God.

I recently had someone describe chant to me as superstitious. They compared it to the chanting of American Indians in ceremony.

I explained our ministers are not asking a deity FOR something; some favor like rain. Instead, they are repeating God's words to Him. They are praying not for some favor from a distant power, but are asking that God's will be done, regardless of what we think we need..

Chant is one of the things that brought me into the Lutheran Church. Not because it is pretty, ego-building, or entertaining, but because it delivers God's Word in a rememberable (momorizable) manner.

I'm afraid critics of chant are simply hearing a droning noise, or only attending to the quality of the pastor's voice. There are words there worth the listening!

I think that a reason why many in the congregation do not like the pastor chanting, as opposed to them, is because too often they have heard a pastor chant badly, very badly. We have to be honest that very few pastors, in any Christian confession, are trained musically. Seminaries should train their pastors and priests to chant. I think that's the main reason.

There are other reasons too for the opposition:
1) The style of chant is musically poor. If Lutherans would have just kept the Gregorian psalmody then I think chanting would be more accepted. The modern psalm tones in the LSB are abysmally bad that whoever wrote them should be ashamed. Adoption of Gregorian psalmody is better musically, but that leads to the second reason.
2) It's too Roman. Romaphobia rears its ugly head again. We can't chant; that's what those damned Catholics do. We need more guitars and drums!
3) How dare the priest chant solo. We should all chant the same parts together. Let's be honest, in modern Lutheranism, there is a lot of anti-clericalism. If the pastor is doing something that others are not allowed or should not be doing, that's going too far.

Lutherans have themselves to blame for the near destruction of their rich musical tradition and their inheritance from Bach, Schutz, Cruger, Herrman, Decius, et al. Guitars and drums are going to be the continued preferred m.o. of modern Lutheran worship.--Chris

I would disagree about the Psalm tones in LSB, LW, and Hymnal Supplement 98. I think they are fine. Our congregation sings them well (especially the four theme tones)!

Until the last generation or so, every Lutheran pastor had to pass a music proficiency test as part of preparation for the pastoral ministry. Chant can be taught to nearly any pastor who wants to learn. The key here is wants to learn.

Chant attracted me to the Lutheran faith over 50 years ago. Brings the word right to the heart.