It might seem odd but the liturgical experimentation in Greece is not all that different from the West.  In fact, it seems it might be quite similar.

Read the story of such liturgical experimentation here. . . or read on below and follow the link for pictures...

The Divine Liturgy of Serapion Celebrated For the First Time 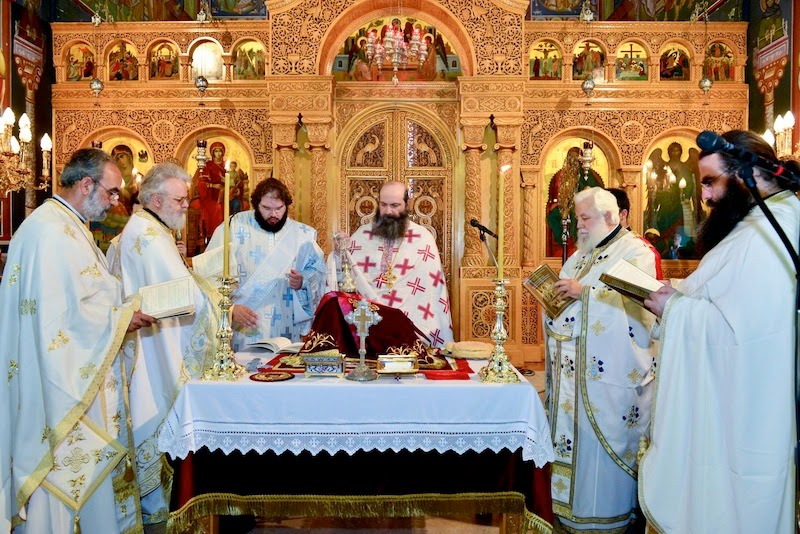 On Sunday, June 16, 2013 all those who attended the Liturgy in the Sacred Church of Panagia Myrtidiotissa lived a moment of devoutness, on the occasion of the celebration of the, until then unknown to many, ancient Divine Liturgy of one of the Holy Fathers of the holy and sacred Synods, Bishop Serapion of Thmuis.

The Divine Liturgy of Serapion (4th century Egyptian bishop), in a revival of an historical rite, was celebrated for the first time officially and with the license and blessing of His Eminence Metropolitan Seraphim of Piraeus in the Holy Church of Panagia Myrtioditissa in Piraeus, according to ancient Alexandrian ecclesiastical order and decorum.

Attending the Divine Liturgy was also the Professor of Liturgical Theology at the University of Athens, Mr. George Filias.

Mr. Filias reported on the Euchologion and the Divine Liturgy of Serapion, even interpreting different parts of the Liturgy for the faithful to better understand it, and praised the importance and richness of our liturgical tradition.

Speaking from my own perspective only, I found the place -- outside the iconostasis -- as shocking as the ad orientem posture.  Yes, the liturgy is old.  Yes, it was sanctioned by the Bishop.  Yes, it seems odd.  But... it was odd not in the sense of novelty created for the moment than the rekindling of an older tradition.  For that reason, I will give it a pass from my acerbic wit and complain that it is an historic thing treated as if it were spontaneous and new.  This is the one big problem here.  At least for me....

It's ad orientem with an e, Pr. Peters.

how is reviving a tradition "odd?" YOu Lutherans need to do that all the time.

The problem is, it's not "reviving a tradition," but taking as true the now-discredited notions of late 19th/early 20th century scholars, and acting on that erroneous basis.