The modern penchant for tolerance was not always seen as the virtue it is accorded today.  Lets fact it.  Most churches, even Lutheran, have become a permissive community where little attention is given to confession and where there is a great divide between even basic beliefs and conduct.  The language of sin is as far removed from liturgical text and preaching as it is the common conversation of the members.  As such, most modern forms of Protestantism bear only a passing resemblance to their Reformation forebears.

Lutherans also struggle mightily in this area.  Comfort is the byword of the day -- comfort pervades the people and the witness.  Who wants to go to church to be convicted?  Who wants a pastor who holds you accountable?  No, we seek affirmation and the cheap grace of an affordable Gospel.  Indeed, there is not much that would compel a person to join, or after joining, to attend church.  Statistics seem to support this.

In March of 1525, Pastor Nicholas Hausmann, rector of St. Mary's of Zwickau, sought an orderly reform of the mass and the approval of Luther for his draft of such an evangelical reform.  In his reply, Luther suggested ditching the preface for an "Exhortation to Communicants" (LW 51, p. 104).  It was not without precedent.  The year before Osiander had already inserted one prior to communion.  Luther's exhortation was nothing if not blunt and showed a flair for the dramatic.  It warns against taking consolation from the Sacrament for those who are unrepentant or who refuse to attempt amendment of their sinful lives.

Later church orders (especially the two most influential -- the Bugenhagen and Brandenburg/Nuremberg) took this innovation to heart and influenced a whole history of Lutheran liturgies.  Although I am in no way in favor of Luther's drastic innovation of ditching the preface and substituting such an exhortation, I will admit it is thoroughly consistent with the time and the ordinary approach to confession and communion.

What strikes me, however, is that if and when we might repeat Luther's words today, they would be seen as completely unevangelical and at odds with the very nature of the Eucharist as welcoming meal (as presently understood).  In fact, the Pastor who would read Luther's exhortation might very well stir up a list of enemies both within the parish and in the District Office.  Such blunt language about sin and repentance and unworthy communion is hardly commonplace among us anymore -- to our loss.  I am not so sure that the discomfort with the exhortation would be due to the liturgical abruptness of its insertion to the canon of the mass but because we no longer see the center of the Eucharist within the framework of sin and forgiveness.  Grace has come to mean silencing all mention of the Law and sin.  The only kind of repentance typically addressed today is our failure to be truly human, to deal honestly with our desire, to advocate for the oppressed, and to live with the smallest imprint upon creation.  This is not the lament of guilt which the commandments occasion as the mirror of our sinfulness. 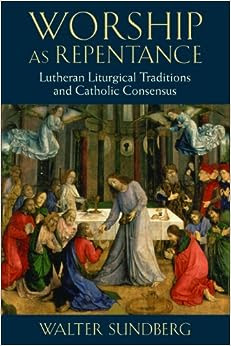 Inspired by Walter Sundberg's book... Worship as Repentance.  Good Stuff!  Read more of this kind of theology in his book available from Amazon!
Posted by Pastor Peters at 6:00 AM

I'm tempted to buy the book but I am a little concerned that Sundberg has been a member of the Luther Seminary faculty. I'm prone to distrust someone at home in the ELCA.

@ David Gray. Not all Israel is Israel. Just as our Confessions say there are true believers even within Rome, there are 'sons of Israel' even in the ELCA. Not all have jumped ship, I am sure; even someone as visible as an author.

Jim Nestingen was a member of the faculty there. Even when they tried to put him out, he sued, and WON.

I'm sure there are believers in both Rome and the ELCA. But I do wonder about going to a man for wisdom who is presumably capable of a complex understanding of things yet can't bring himself to leave an apostate church like the ELCA. If he says 2+2=4 he'll be right but I'll tend to want to check his math.

Both Nestingen and Sundberg favor, IIRC, WO.

>>Both Nestingen and Sundberg favor, IIRC, WO

IN my last parish the largest "Lutheran" congregation in town (3,000+) had left the ELCA for the LCMC. I discovered that many LCMS people moving to the area were confused by the similarity of the acronyms LCMC and LCMS, and the pastors there encouraged this by saying things like, "Oh, yes, we're the same as the LCMS." But we got some LCMS refugees who had unwittingly joined there the first time a (trans)vested woman appeared prancing in the chancel.

In my present parish there is a large congregation in the community that broke off from a different, Protestant denomination over homosexual issues. They tout themselves as being REALLY conservative—and people seem to have swallowed that. But the senior pastor's wife is also a "pastor," and their new denomination "takes no stand on controversial issues" such as women's ordination—and homosexuality!

LCMC is a very loose confederation of churches and clergy. It is not a confessional church body in the way we generally use that term. The individual congregations have broad latitude about doctrine and practice so there is no consistency. There is more consistency in the NALC. Take it from one who found out the hard way.

NALC is "consistent" in its support and practice of WO.