Liberty and Freedom in Worship. . . 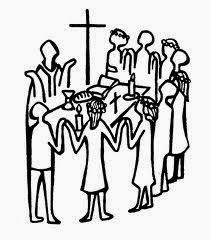 There are always those Lutherans who complain about the liturgy, lectionary, and liturgical year as stifling the spontaneity of the moment, the power of the Spirit to do something new.  So the goal of worship, for those so inclined, is freedom from the rule of the form and its texts, a romantic idyllic freedom in which the spirit of the self and the Spirit of God intertwine in perfect unity and harmony on some spiritual plane far above word or gesture.

The problem is that this elusive freedom is itself its own bondage.  Liberty in worship is achieved less by freedom from text and form or even by the endless freedom of many texts, options, and forms, than it is by the submission and embrace of the rule and text of the liturgy.  The ultimate spontaneity of the moment is the tyranny of self, of moment, of preference, and of the nebulous idea of what is found meaningful.  I would suggest that the freedom so often sought it found not in the escape from the liturgical shape, text, and ritual of the Mass than it is by knowing and being so thoroughly shaped by these that we find God where He has pledged to be in the means of grace.

Spontaneity is less open to the Spirit than it is to the self.  The goal of spontaneity is claimed to be following the leading of God when in reality it ends up less following God than following self -- what feels right to us and to those around us at this particular juncture of space and time.  Instead of the consensus of the fathers and the legacy of the faithful we are held in awkward captivity to the moment itself and to the feelings we either have or do not have in that moment.  This is its own tyranny and bondage.

Original sin means that spontaneity and the moment are no longer the domains of God in our lives but the ordinary arenas of sin and the sinful self.  Our bondage is not simply to the actual sins themselves but to the perspective of self which judges all things.  Its judgment is faulty and its voice is deceptive.  Searching for the liberty of a truly spontaneous encounter with God is original sin left to its own devices.  It is only within the Word and the Sacraments that we are led from the wilderness to the promised land of God's grace and favor.

We are bound to the liturgy because the liturgy is literally the Word and Sacraments, the means of grace.  We are bound to them because in them alone is freedom -- freedom through the forgiveness of sins, through the imputation of a righteousness impossible to us apart from Christ's gift, and through the bestowal of the life that death cannot steal nor overcome.  Sitting around in a circle waiting for God may be cool in a stranger sort of way but there is no guarantee of God's presence and even less that He will be accessible to us there.  It is only where we are gathered in His name -- His name being in His Word, His Water, His Voice (absolution) and His Meal.  That is liturgy.  That is freedom.  That is Spirit.  That is Truth.
Posted by Pastor Peters at 6:00 AM

Folks looking for something "meaningful" flock to a guy in Texas who draws in tens of thousands in a weekend. They hear how their lives on the planet can be what God has planned for them in this life. Oddly, he tells his TV audience to find a Bible based church in their area, while his message seems to lack much, if any basis in The Bible.

Neither Pastor, nor Congregation should ever, EVER feel a need to abandon or water down God's very word in the liturgy for happy clappy crap that might tickle one's innards.

This layman will never be a member of a congregation that has anything other than, or in addition to a truly liturgical service. Such a congregation doesn't know what it wants to be when it grows up.

Spot on, John! This recoverig member of the Evangelical Industial Complex is perfectly at home in the Liturgy!

It seems we Christians don't "get" that we are now slaves to righteousness (Rom. 6). If ever there were a liturgy of life (repetition day to day), a slave certainly had it. Get up, do what your master says, sleep, get up and do it all again.

Rebellion against monotony in life is contrasted to the Stuart Smalley attitude of what is preached in the former Compaq Center. We are not champions, not destined for greatness, not spiritually powerful. It is in weakness, in the slave's atitude (obedience), in the Theology of the Cross we belong.

The Liturgy is God speaking to us. Slaves just need to shut up, listen, do, and be thankful for a Gracious Master.

And don't forget we are also free men, and those freed ought to be thankful to their Liberator. So thankful are they, they will do what the world sees as boring or monotonous in their thankfulness to Him.