In conflict with the faith, creed, and doctrine of the Church of Sweden 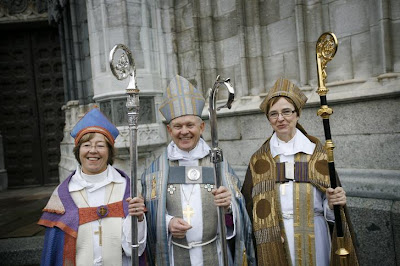 The Church of Sweden has deposed a priest for having told his congregation in a sermon that those who support the ordination of women to the clergy will not be saved.

On 19 September 2014 the Bishop of Gothenburg, the Rt. Rev. Per Eckerdal, (pictured) released a statement saying that after listening to a recording of an August 2013 sermon by the Rev. Olle Fogelqvist, the cathedral chapter voted to remove him from the ordained ministry for teaching doctrines contrary to those upheld by the Church of Sweden.

Bishop Eckerdal stated Mr. Fogelqvist’s comments were “extremely injudicious,” adding that “just the thought that the sex of a priest would be decisive for salvation was startling.”

A curate at the parish church of Löftadalens in Kungsbacka Municipality, Mr. Fogelqvist argued that it was an ontological impossibility for women to be priests. Those who relied upon the efficacy of the sacraments offered by women priests were endangering their souls, he said, because those sacraments were void ab initio.

Women clergy were first ordained by the Church of Sweden in 1958 and the current archbishop of Uppsala is a woman.

Bishop Eckerdal stated that Mr. Fogelqvist had no authority to promulgate from the pulpit views contrary to the received teachings of the Church of Sweden. His false teachings, the bishop said, were compounded by his foreknowledge that two women priests were soon to join the team ministry where he served. Not only had he made statements inconsistent with the “faith, creed, and doctrine” of the Church of Sweden, he had undermined his colleagues before the start of their ministry.

Mr. Fogelqvist was certainly intemperate in his remarks but often the truth is.  I might suggest that his issue is not simply with the ordination of women but from the implications of a secularized church which, in many respects, the Church of Sweden has become -- but that would be putting words into his mouth.

What else you might glean from this comes from the Bishop's statement that the ordination of women has become one of the essential characteristics of the "faith, creed, and doctrine" of the Church of Sweden.  And this is the rub.  Churches that ordain women have made the ordination of women part of their confession, sometimes so essential to their confession that it seems to exclude orthodox Christianity itself.  For example, I wonder what might have happened if the same priest had suggested that Jesus' resurrection was a pious myth or legend or that sin was not the reason for our Lord's sacrificial suffering or that each person had to work out his own salvation with good works...  Certainly these would be an even greater assault on the character of Christianity and the Lutheran Confession of which the Church of Sweden claims to confess and yet, my fear is that these would be overlooked or treated less seriously than this man's rather strident objection to the ordination of women.  BTW one can only wonder when the ordination of gays/lesbians will become the same essential core teaching of the "faith, creed, and doctrine" of those Lutheran churches who have headed down that road. . . OR are they already?!?

As one person put it:  At least the Church of Sweden has its priorities, even if its beliefs are unclear:   In June 2011, in contrast to this case, the Church of Sweden decided not to defrock Ulla Karlsson, a female pastor who had published a column in the Church of Sweden newspaper during Lent. The column directly attacked basic Christian doctrine, declaring inter alia  There is no fallen creation and therefore the whole doctrine of the atonement is irrational! Throw out all the talk about sin, guilt, shame, blood, slaughtered lambs and other horrors! It has no place in modern times, among enlightened people!   The Consistory placed this pastor on probation, but did not find her to have committed a serious “breach of ordination vows” or to be “in conflict with the Church of Sweden’s faith, confession and doctrine."
Posted by Pastor Peters at 6:00 AM

From the linked article: "Mr. Fogelqvist argued that it was an ontological impossibility for women to be priests. Those who relied upon the efficacy of the sacraments offered by women priests were endangering their souls, he said, because those sacraments were void ab initio."

Similar comments have been made on other Lutheran blogs that commmunion officiated by pastrixes is no different than a communion scene in a movie played with actors and actresses, or than a pretend communion by children playing.

Intemperate does not mean wrong. Perhaps the meaning here is that Mr. Fogelqvist's remarks were correct in substance but not appropriate in timing or place. I do not know.

From Merrriam Webster::
INTEMPERATE:
1.given to or characterized by excessive or immoderate indulgence in alcoholic beverages.
2.immoderate in indulgence of appetite or passion.
3.not temperate; unrestrained; unbridled.
4.extreme in temperature, as climate.

I don't believe #1 is the issue, nor is #2 or #4. I assume the good Father was intemperate by being unrestrained and unbridled (at least until being defrocked) in his speech.

Political/social correctness is causing the church to be intolerant of Truth. Sad.

As I recently heard somewhere, pastors/priests are not in the pulpit to teach something new. They are there to deliver the same old Good News. So as Anon. said, "Mr. Fogelqvist's remarks were correct in substance but not appropriate in timing or place."

The Church of Sweden is apostate and has been for quite a while. They cannot stand the Truth, and will not tolerate anyone who insists upon it.

At least the Church of Sweden has its priorities, even if its beliefs are unclear:


'There is no fallen creation and therefore the whole doctrine of the atonement is irrational! Throw out all the talk about sin, guilt, shame, blood, slaughtered lambs and other horrors! It has no place in modern times, among enlightened people!'


The Consistory placed this pastor on probation, but did not find her to have committed aserious 'breach of ordination vows” or to be “in conflict with the Church of Sweden’s
faith, confession and doctrine'."

The priest knows the policies of the CofS. No big surprise what has happened to him.
What he should be charged with is the lie of Donatism.

and for good measure, sacerdotalism.

7:47 AM Anonymous: Perhaps the meaning here is that Mr. Fogelqvist's remarks were correct in substance but not appropriate in timing or place.

Huh? Speaking something that is correct in [doctrinal] substance is "not appropriate in timing or place" in a sermon?!?

I don't think those words mean what you seem to think they mean.

"I don't think those words mean what you seem to think they mean"
Exactly. The priest was spouting theological nonsense. He should've been removed if he refused to withdraw his heretical statements.

Would any of those who have commented on Pastor Fogelqvist's sermon, referred to it as "theological nonsense" and "heretical statements", or pondered whether it is for donatism or for sacerdotialism he should be defrocked, have any knowledge whatsoever of what he actually said?

From the above article...

"Mr. Fogelqvist argued that it was an ontological impossibility for women to be priests. Those who relied upon the efficacy of the sacraments offered by women priests were endangering their souls, he said, because those sacraments were void ab initio."

Yes, what Pastor Fogelqvist is reported to have said above, in the previous comment, is neither Donatism nor sacerdotalism, but plain ordinary historic "mere Christianity."

This could lead one to ponder which is more shameful: the lying, the cowardice, or the desire to appear more educated than one obviously is by spouting theological terms as to the meaning of which one is clearly ignorant.

Of course such ponderings would be pointless.

What the point is, is: shame!

THE VIRGIN MARY AND THE TRUTH by steve finnell

Are the man-made denominational doctrines about the Virgin Mary supported by Scripture? No, they are not.

1. MMD: Mary is the mediator between mankind and Jesus; therefore the path to the Father is through Mary, then through Jesus.

GD: 1 Timothy 2:5 For their is one God, and one mediator also between God and men, the man Christ Jesus.

2. MMD: The gift of salvation comes through Mary. She is the gate to heaven.

Jesus is the gateway to heaven and the only way.

The Scriptures never instruct anyone to pray to Mary or through Mary.

Prayer is an act of worship. To pray to any other god or person other than God is sinful and that includes the Virgin Mary.

4. MMD: The teaching that states that the Virgin Mary is the divine Mother.

GD: Colossians 1:16 For by Him all things were created, both in the heavens and on earth, visible and invisible, whether thrones or dominions or rulers or authorities--- all things have been created through Him and for Him.

Jesus was the creator of all things. The Virgin Mary was a created being. Mary is not divine. Mary is not God.

5. MMD: The Lord in heaven is submissive to Mary.

GD: And Jesus came up and spoke to them, saying, "All authority has been given to Me in heaven and on earth.

The Lord in heaven is submissive to no man nor the Virgin Mary.

GD: Romans 3:23 for all have sinned and fall short of the glory of God.
John 1:8 If we say that we have no sin, we deceive ourselves and the truth is not in us.

The Virgin Mary was not sinless.

GD: Hebrews 5:9 And having been made perfect,He became to all those who obey Him the source of eternal salvation,

Jesus is the means to salvation, not Mary.

There are not any New Testament Scriptures to support the man-made denominational doctrines about the Virgin Mary.

THE TRUTH ABOUT THE VIRGIN MARY IS FOUND IN THE BIBLE AND THE BIBLE ALONE!

Man-made doctrines about the Virgin Mary are found in catechisms, creed books, and other writing that are not inspired by God.