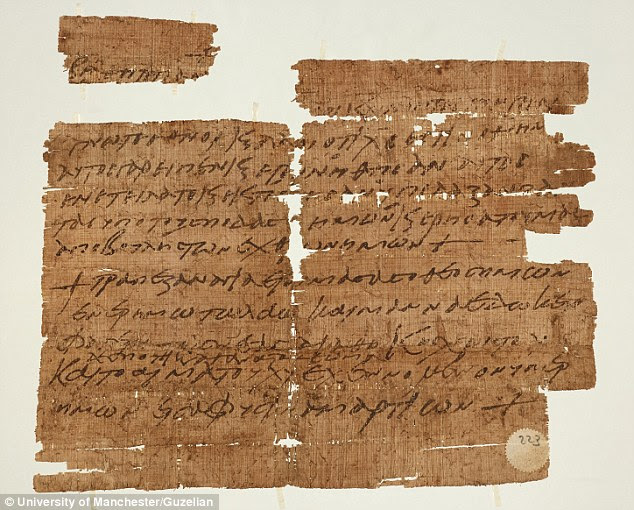 This from The Mail Online:

It has laid largely unstudied in a university library for more than 100 years.  But now a 1,500-year-old papyrus has been identified as one of the world’s earliest surviving Christian charms.  The ‘remarkable’ document contains some of the earliest documented references to The Last Supper and sheds new light on early Christian practices, experts say.

The document was rediscovered in the University of Manchester’s John Rylands Library.  It is the earliest surviving document to use the Christian Eucharist liturgy - which describes The Last Supper - as a protective charm.  The ‘magical’ words are written on a recycled piece of papyrus, which was originally used as a grain tax receipt.  She believes that the charm casts important new light on early Christianity - just 300 years after the Roman emperor Constantine converted to the religion.  It shows how Christians adopted the ancient Egyptian practice of wearing amulets to protect the wearer against dangers.  This practice of writing charms on pieces of papyrus was continued by the Christians who replaced the prayers to Egyptian and Greco-Roman gods with extracts from the Bible.

Dr Mazza used spectral imaging techniques to reveal that the charm was written on recycled papyrus.  Faint lettering on the back of the charm is thought to be a receipt for the payment of grain tax which was certified by a tax collector from the village of Tertembuthis, outside the ancient city of Hermopolis, in modern el-Ashmunein.   Dr Mazza explained: ‘The amulet maker would have cut a piece of the receipt, written the charm on the other side and then he would have folded the papyrus to be kept in a locket or pendant.  It is for this reason the tax receipt on the exterior was damaged and faded away.’  The document had been held at the library since 1901, but no-one had realised its significance.

Dr Mazza said: ‘This is an important and unexpected discovery as it’s one of the first recorded documents to use magic in the Christian context and the first charm ever found to refer to the Eucharist - the last supper - as the manna of the Old Testament.  The text of the amulet is a combination of biblical passages including Psalm 78:23-24 and Matthew 26:28-30 among others.  It includes the words: ‘Our God prepared a sacred table in the desert for the people and gave manna of the new covenant to eat, the Lord’s immortal body and the blood of Christ poured for us in remission of sins.’  Dr Mazza said that some Christians still use passages from the Bible as protective charms, so the amulet marks the beginning of a trend in Christianity.  ‘Though we know almost nothing about the owner of the charm, we think it could have been owned by a resident of the village nearby Hermopolis (el-Ashmunein),’ she said.  ‘We can say this is an incredibly rare example of Christianity and the Bible becoming meaningful to ordinary people - not just priests and the elite.

‘It’s doubly fascinating because the amulet maker clearly knew the Bible, but made lots of mistakes: some words are misspelled and others are in the wrong order. This suggests that he was writing by heart rather than copying it.  ‘It’s quite exciting. Thanks to this discovery, we now think that the knowledge of the Bible was more embedded in sixth century AD Egypt than we previously realised.’
Posted by Pastor Peters at 6:00 AM

Why is it that discoveries like this NEVER post what was written. There are only comments regarding the writer's perspective.

I actually heard it 'read' on NPR when it first came out; maybe if you look in their archives....

I am not so worried they don't reveal what the document said, as I am concerned with the way the media report these things in a sceptical or snarky way.

If all the documents (including the small ones like this) were stacked one upon another, the stack would be three miles high! ALL of the documents of ALL other ancient documents (like Homer, Catullus, Seneca, etc.) stacked would only be about four to five feet high.

I know the fact the New Testament has an "embarrassment of riches" in ancient documents cannot convert someone, but it would be nice if these things were given media attention in a proper way.

If the document really does come from the Sixth Century, as the article states, then it is far from containing "some of the earliest documented references to The Last Supper".