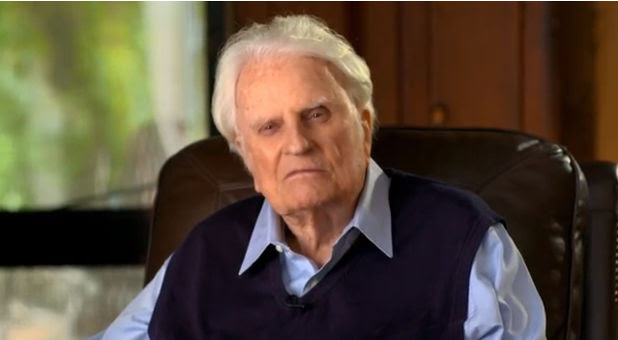 Graham told one reporter that if he was starting over again he would be ‘an evangelical Anglican’. He once told veteran journalist Kenneth Woodward he saw ‘spiritual beauty in Anglican order’. Leighton Ford has revealed in an email to Wacker that Graham has asked Richard Bewes, former Rector of All Souls, Langham Place, to help officiate at his funeral service.

You can read about it here.

To those who seem to think that mission and liturgy are antithetical terms, here is affirmation from one unmistakable proponent of mission orientation that liturgy, beauty, and order are not antagonists to the work of God's kingdom.  Strangely, though, there are Lutherans who would argue with Graham and insist that in order for us to reach the lost and grow the church, we must ditch the liturgy, hymnody, and beauty all for the sake of relevance.  Hmmmm.... What do you think?
Posted by Pastor Peters at 6:00 AM

What? So Graham wouldn't want to join the Lutheran Church or the Missouri Synod,, for which many Lutheran articles and books have been claiming Graham referred to the LCMS as the "sleeping giant"?!

Of course, according to Mark Millett: "Billy Graham once said that the Catholic Church is a sleeping giant about to wake up."; and according to Grace Fellowship United Methodist Church: "As Billy Graham noted, the Methodist church is a 'sleeping giant' that if awakened could truly bring the light of Christ into the world in a powerful way."; or from Robert P. Swierenga's Burn the Wooden Shoes: Modernity and Division in the Christian Reformed Church in North America: R.B. Kuiper ["Is the Christian Reformed Church 'A SLEEPING GIANT'?", Torch and Trumpet, Dec. 1961, pp. 7-8] sounded a jeremiad: “If Calvin College and Seminary are to continue to serve the Christian Reformed Church as pillars, they will have to remain . . . bulwarks of orthodoxy.” Otherwise, the church will lose its place as “one of the most orthodox churches on the face of the globe,” and it will belie Billy Graham’s characterization of it as a “sleeping giant.”; or
Dan Wooding in “Awakening the Sleeping Giant”, quoting Billy Graham: “The Native American has been like a sleeping giant. He is awakening. The original Americans could become the evangelist who will help win America for Christ!”

So someone claiming he read or heard somewhere that Graham told someone that he saw beauty in the Anglican order is probably not going to buy a half cup of coffee.

No matter who was captioned the "Sleeping Giant," or whether Graham would be Lutheran, Catholic, Anglican or even Orthodox matters not a whit. Those who would abandon the "faith once for all delivered" are wrong. Abandoning historic Liturgy as well is foolish. Pardon the reference, but as Forrest Gump says, "Stupid is as stupid does."

Having come from fundagelicalism, it never ceases to amaze me how Lutherans (and, yes, Calvinists, too) believe relevancy is ultimate. Whether Graham would be Anglican or whatever, he is one more example of someone who finds the need for order and beauty in the historic, confessional Christian Faith.

One of the conundrums facing Christianity today is division, with each group claiming they have the ultimate truth, when in essence we need to recover what historic Christianity means. Definitely we cannot get rid of the liturgy, but we must also be evangelistic in the sense of Billy Graham. Yes, we Lutherans can be proud of our liturgy, none-the-less we do a terrible job of evangelism.