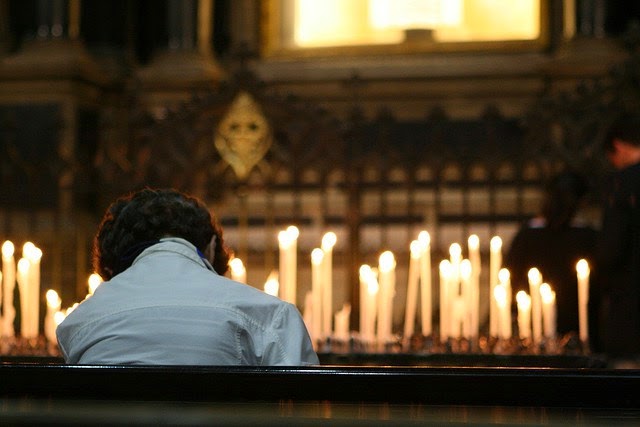 One of the more profound difficulties of the modern age is the way the liturgy, even among its friends, is more likely to be seen in the context of the devotional life of the individual, as one of many tools or sources of spiritual growth, rather than the source and summit of Christian life.  In other words, there remains a distinct tension between the Divine Service as the fount from which our lives in Christ flow and the summit or peak to which our lives are addressed and the idea that corporate worship, the Divine Service, the means of grace, are all one of several or even many sources of our spiritual lives and not the goal or peak of that spiritual life.  The tension is between individual and corporate, to be sure, but it is far more than this.  The Eucharist is the singular and gracious source of our life together, koinonia, as well as the focus to which our lives return in the unbroken cycle of the eighth day and our lives planted within God's kingdom and time by baptism.

I encountered this in an article, of all things, on the tension between the Benedictine and Jesuit models of spiritual life.  Peter Kwasniewski wrote an article at the New Liturgical Movement website called The Ironic Outcome of the Benedictine-Jesuit Controversy.  According to Kwasniewski (a mouthful),  A “Benedictine” liturgical model, drawing from monastic life and its corporate worship and devotional life, and paralleling the classical liturgical movement, views the liturgy as the source and summit of Christian life.  On the other hand, a “Jesuit” liturgical model sees the Mass as “one among many tools of personal spiritual growth, with private meditation having a certain pride of place.”

The fruits of the Liturgical Reform include, among other things, a kind of merging of the two models.  The liturgy is a chief priority for the individual devotional life of the baptized, but, it is a liturgy which is less communal gathering than it is a more intensely personal and subjective liturgy which is both perceived and valued individually.

Certainly it is not much disputed that the path of liturgical development, demonstrated especially by the medieval period, has been a move from the more corporate sense of the gift received and celebrated to a more individual piety in which the value and blessing of the Mass is viewed through the lens of the individual.  Perhaps this mirrored the eventual silence and spectator role of the faithful as the Mass became less the domain of the people's response than the arena of the clergy, minor clergy, and choir.  The somewhat Romantic view of the development of the liturgy and a desire to replicate the more pristine forms of the church's earliest life were not without their own lens of judgment by the individual.

The author of the article insists:  The legacy of the post-conciliar reform is a Benedictine insistence on the primacy of liturgy, fused with a Jesuitized re-conception of liturgy as collective private devotion. It is as if new Jesuit wine has been poured into old Benedictine wineskins, causing them to rupture. The moment of triumph was the moment of disaster, as the very notion of a rite—a formal ritualized act of common worship based on a common orthodox tradition—gave way to a pluralistic, relaxed, malleable, and privatized praxis of variations on a more or less Catholic theme. In short, the Consilium’s exploitation of Sacrosanctum Concilium left us with a volatile mixture that makes genuine reform today much more difficult.

While he speaks from and to a Roman Catholic perspective, his words are not without application within the larger world of liturgical reform.  The point is that liturgical reform is made more complicated and because it is not simply about forms, change, texts, antiquity, and modernity but about a more modern idea of an individual spiritual life of which corporate worship and the Mass/Divine Service is but one component (albeit very important) vs the idea that the personal and individual devotional life of the Christian draws upon many sources and is encompassed less toward God than it is the fullness of the life of the individual.  I think that is exactly the key.

Folks fighting the worship wars are often seen as battling musical styles or ancient words and forms that have meaning only because they are ancient.  In essence, we tend to take for granted that everyone looks to the Mass/Divine Service as the same thing and for the same purpose.  This is a fallacy.  Lutherans also find liturgical renewal challenging because our people no longer see the Divine Service as source and summit of their baptismal lives together (first) and individually (as a consequence).  Rather, the hard truth to admit is that our people no longer see the essential need for the Divine Service or even the Sacrament of Christ's Body and Blood.  Their devotional lives have many sources and the summit of their devotional lives is shaped by individual need and focus -- a better life, marriage, family, work, etc... or happiness.

When I visit delinquent members and even when I speak with regular folks who sometimes absent themselves for somewhat prolonged times from the Divine Service, I hear them assure me that they are still Christians, still believe, still read the Bible, etc... but that they do not need to attend corporate worship or to receive the Sacrament to nurture their lives in Christ.  They draw from many sources and the Eucharist is but one.  This is surely open to debate but my point is that they are saying that their individual devotional lives are neither rooted from nor directed to return to the Divine Service.  This surely applies to Lutherans the same difficulty that the author of the article sees as one of the fruits of modern liturgical renewal -- yes the Eucharist is important but it is not the source and summit of the Christian life but rather one of many different sources and peaks of my individual piety.  This has to change before we can address the actual changes in form and words that also marked the time of modern liturgical renewal.  Increasingly we are finding folks less attached to the Divine Service and more individualized both in their expectation of and their appreciation for what happens within the Divine Service.

Brilliant and right on.

This looks to have some roots in the infection Evangelicalism has transmitted to Lutheranism. Baptists love their "quiet time" (I don't think they call it that anymore). They love reading devotional books (ah, apps) with daily Scriptural tidbits of advice for living. This would apply to many of the non denoms, also.

The reappearance of many Catholic practices such as labyrinths, monastic communities, lectio divina, etc. within many congregations prove the Evangelical kinship of Roman to Evangelical theology.

RE: "The Eucharist is the singular and gracious source of our life together, koinonia, as well as the focus to which our lives return...."

Let's be clear. We look to Jesus who is the author and perfecter of our faith. (Hebrews 12:2) And wherever two or three are gathered in His name, there He is (Matthew 18:20) to bless with HIs presence.

When clergy declare that the Divine Service should be a "Summit" in the life of the Christian, it seems to me that's like saying that the talk by the coach in the locker room at half-time should be the highlight of the football game. The highlights, however, are always about what has happened on the playing field.

Anonymous,
RE: "Let's be clear. We look to Jesus..."
When I partake of the Eucharist...I am looking at Jesus. Right there in my hand. Can't be more "in His presence" than that!