Between Lust and Righteousness. . . 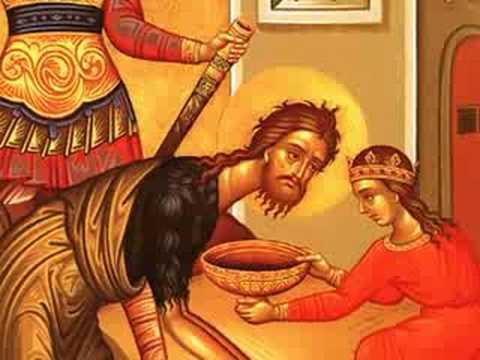 We live in a liberated day.  Sex is just sex.  It does not have to mean anything.  It does not necessarily mean love and it certainly does not mean children.  It means desire and in our age desire rules the roost.  Those who object to our pandering to desire are called prudes or narrow minded and judgmental people.  It is said that they are unhappy and so they try to make the rest of us share in their own unhappiness.  The only voice of conscience that we pay any attention to is the one that says, “Go ahead and do what you want.”  Our world cannot conceive of anything consensual being wrong.

In many ways, Herod the Tetrarch was more moral than we are.  He was a man of lust who lived in an incestuous marriage and seemed filled with desire for his wife’s daughter as well.  How lurid is it when a step dad has his teenage daughter do an erotic dance for the benefit of the perverted eyes of his friends!  His immoral life was public knowledge and St. John the Forerunner had publicly held him accountable.  Yet, Herod had a conscience.  He knew John was a righteous and holy man and he protected John even against Herodias, his brother’s wife whom he took as his wife, who wanted John silenced permanently.  Though he was perplexed by John’s call to repentance, he heard John’s preaching of the kingdom gladly.

Even the mighty Herod was convicted by his own conscience and by John, the prophet of God.  He is just as evil as his father who had killed the boy babies of Bethlehem in pursuit of Jesus but he was constrained both by the high esteem John had with the people and his own conscience.  At least until Herodias  found a way to tie Herod’s conscience in a web of deceit. She coaxed her daughter in the art of seduction until Herod lost his mind in the desire of his loins.  In a spontaneous act of stupidity and indulgence, he offered Salome anything she wanted up to half his kingdom.  In front of the assembled guests, his offer became a public promise he had to keep or risk being seen as a fool.

Moved by her mother, she asked not for riches or property but for the head of St. John on a platter.  Here was Herod’s ego served up on a tray bearing the head of the righteous man who he knew was a prophet sent from God.  It is bloody and gory and yet it is not far from the things we see every day when conscience is beaten down by desire, lust rules the hearts of both men and women, and immorality is called good often enough so that we begin to believe our own deception and lies.  Such is the fate of a righteous man or woman still.

The most truth you ever say is when you kneel here in the house of the Lord and admit that you are sinful by nature, that you have sinned in thought, word, and deed, and that you have sinned by the evil you have done and by the good you have not done.  What brings you to this truth is nothing less than the Holy Spirit and the same Spirit works in you repentance so that your confession is not just words but the voice of a contrite heart begging to be remade and reborn clean, whole, and righteous.

And that is what Jesus does.  With the voice of absolution, He makes not only your sins go away but He works on your sinful desire.  He strengthens the voice of the conscience within you so that God may guide you to avoid evil and do good.  He transforms your heart so that you may learn to see that the Law of God is good and right and true and He makes you want what is good and right and true.  He clothes you with His own righteousness just as He pays once for all the impossible debt your sins have accrued.  He delivers you from the just punishment you deserve by carrying it on His own shoulders on the cross.  He sends you forth with a clear conscience and with a heart that hears the voice of the Spirit and the Word of God even though you will not always heed it.

The world hates you.  And if you make peace with the world, you lose the gift of a clear conscience and you surrender the gift God gave you in your baptism.  You may fear the world but do not forget or discount the power of God.  A wounded animal is the most dangerous one.  The world hates you and seeks your destruction because the world is still suffering under the wounded devil who lost but is still grabbing as many as he can taken down with him.  The world hates you and mocks the Christian values you hold and delights in calling you a hypocrite and gloating over your every fall and failure.

But Jesus is with you and He is more powerful than the world and the devil.  He can harm us none.  He’s judged.  The deed is done. Or so we sing in the A Mighty Fortress.  We belong to Him.  He will not surrender us to any power under heaven and on earth or of the devil.  He holds us in the palm of His name.  The only freedom that is real is the freedom to live without fear in the Christ who lived and died and rose for you and now clothes you in righteousness as His own.  Do not lose heart.  Evil is powerful and real but the cross more powerful and even more real because it bestows an eternal victory upon us.

We pray the Lord to grant us strength.  We pray that the courage of our convictions may be granted to us in the trials, troubles, and temptations of this world.  We pray for the courage of John who refused to surrender truth to lies or accept immorality as good.  We pray for the faith not to fear the power of the world but to rejoice in the power of our Savior.  We pray for the witness of John to guide us to the Lamb of God who takes away the sin of the world and for the example of John to endure under persecution and suffering.  We pray the peace of God that John knew in prison and even before the executioner’s blade.  We pray for those who still surrender their lives rather than renounce Jesus Christ and who are faithful even to death so that they may receive the crown of everlasting life.

Friends, do not be fooled.  We live in tough times.  Not only is the Word of God under assault but our culture works so very hard to silence the voice of our conscience to make us immune to guilt and to prevent us from repentance.  We live in dark times when immorality is held up as good and truth is bent by desire.  We live in difficult days when being a Christian forces us to make hard choices between faithlessness and faithfulness all the day long.  But in the midst of all of this God is at work.  His sword is His Word, His power is the cross, and His goal is not our condemnation but our salvation.  We have no perfection to prove we are good but only the cross and we have no righteousness of our own to wear but the righteousness of Christ.  And yet this is enough – enough to sustain us to the end.

What is our prayer?  May the Lord who began this good work in us bring us to completion on the day when He comes in His glory.  That is our prayer.  Finish in us, O Lord, Your new creation.  Keep your people holy and blameless through absolution.  Strengthen Your people with the food of Your flesh and blood.  Guide Your people with the living voice of Your Word.  Lead us not into temptation but deliver us from evil.  Some of us may be spared but some of us may suffer the same fate as John.  We have already witnessed the martyrs whose white robes endure the threats of the enemy all around the world.  Truly the blood of the martyrs is the seed of church.  And what is planted in suffering will be raised in glory, what is planted in weakness will be raised in strength, and what is planted in death will bear the fruit of eternal life.  God grant it in Jesus name.  Amen.
Posted by Pastor Peters at 6:00 AM