There have been any number of articles and posts from Roman Catholics of late suggesting, perhaps even insisting, that Pope Francis was becoming a Lutheran.  He has been more than favorably compared with Luther himself by those inside and outside Rome.  But that is really a joke, or should I say insult both to Luther and to Lutherans!  Rome should be so lucky if Pope Francis was like Luther.  In fact, he is not and therein lies the real problem with this Pope.  Yet some of his detractors and admirers insist that he is like Luther or Lutheran in his thinking when it betrays the fact that they do not know Luther nor Lutheranism at all. 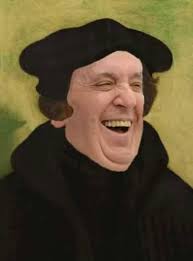 Francis is more like a liberal than he is a Luther.  In fact, he has more in common with generic liberal Protestantism than with Luther who really only wore that name when it meant something.  Protestant today means little except the rejection of most doctrine, the skeptical view of the Scriptures and its truth, and the affirmation of a general love and goodwill that is the Gospel (minus the suffering and death and resurrection of Jesus).

Carl Trueman put his finger on it.  If Pope Francis is a reincarnation from the 16th century it is not Luther but someone whom Trueman considers much worse:  Desiderius Erasmus.  Though the most famous clash between Luther and Erasmus was on the matter of free will, there are many other points of difference worth nothing.  In effect, it was a distinction not only on free will or the bondage of that will but on two completely different ideas of man;s capacity to effect some or perhaps all of his salvation.  It is the difference of a Christianity rooted in Scriptural truth and dogmatic certainty versus a hopeful idea of human creativity and redemptive work under the power of love.

It was not Luther who could be looked to as a voice to set aside the shape of humanity in male and female and the marriage created by God for as long as man and woman shall live and especially for the sake of procreation.  It was not Luther who questioned the legitimacy of Scripture's prohibition of homosexual behavior.  It was not Luther who opened the Table of the Lord to those who felt they had a place even though they did not agree with what was confessed and received at that Table.  It was not Luther who promoted confusion to confound critics (his was a clarion call for clarity in all matters of faith and life!).   No, Virginia, Francis is not Luther and Luther was not a forerunner of Francis.

In the end I am amazed at the ignorance of those in Rome who would claim Francis and Luther are pretty much the same or that Francis' revolution is the same as Luther's reformation.  Perhaps those years of formal dialog have only touched the barest few involved and the rest of Rome lives on the strength of stereotypes and epithets.  If Rome does not want to be characterized falsely as worshipers of Mary who kill Jesus all over again at every Mass so that people can be placed in Purgatory until they or their families and friends contribute enough works to finish the job Jesus couldn't, then why do Roman Catholics persist in foolish errors with respect to Luther and his heirs?  You cannot look at Protestantism today and find your way back to Luther.  The radical reformers have shaped the bulk of Protestantism, to be sure, and some, even too many, Lutherans have followed their dead ends but if you judge Lutheranism by what we have confessed formally, you can see Lutherans are not Protestants (the way that term is used today by all sides) nor is Francis a Lutheran or even a Luther wannabe.

Francis seems to say to all -- homosexuals, divorced, spouses of Roman Catholics, and everyone else -- pray and do good.  Luther would surely insist that prayer is good and good works should be done (for the sake of the neighbor and not to contribute to salvation) but Luther would never shrug his shoulders and say "who am I to judge" or "pray and do good" to those seeking certainty about their salvation or unrepentant in their sins.  Nope, the comparison may be fun to make but it contributes nothing to understanding either one of them.
Posted by Pastor Peters at 6:00 AM

Well... yeah. The latter is the Antichrist and the former isn't.

The way I understand it, after Luther had a few beers, he would often become rather coarse in his speech. He told more than a few jokes, especially about the Pope. Meanwhile back at the Vatican, the Pope drank too much wine as he planned the Counter-Reformation, and had some unkind and choice words for that "old rascal monk."

Larry, as is an obvious reality, you write as a Lutheran. Lutherans, especially of the “confessional” subspecies, are so conditioned to see history from the point of the Lutheran Reformation.

As one raised as a Roman Catholic, and having an obsesson with theology from elementary school forward, I see a bigger picture. The article you cited at the beginning of your post is most informative. You read it as it applies to Luther and Francis. I read it as a very insightful history of what the author calls “Roman Catholicism” and its development as more of a culture with its own law, judicial system, catechesis, formation of clergy, celibacy, marriage and sacraments. The development of the papacy and the doctrine of infallibility and its very limited use (twice) which institutionalized Marian devotion as elements of “Roman Catholicism”. One begins to see “cracks” in this system, largely defined by Trent (much of which is in response to the Reformation of the 16th Century). Roman Catholicism found an ally in Benedict XVI and his “repristination” (my term) of the papacy. His resignation ended the dominance of the old “Roman Catholicism”.

Enter Francis, a Southern Hemisphere Jesuit. He is formed and lives his priesthood and episcopacy as almost an “anti-Roman Catholic” (my term), casting off the trappings of the episcopacy such as the life of luxury of the South American episcopacy such as palaces, limousines, etc. He took the light-rail to get around, he mixed with people with a minimum of trappings and security. When he is elected and takes the name Francis, there are shock waves in the “Roman Catholicism”, particularly in the Curia of Rome.

Cardinal Kasper’s “mercy theology” (Lutherans really ought to read this without the “Roman Catholicism” labeling of him as a liberal, he is actually quite incisive) gives Francis something he can latch onto in the Vatican. Francis is rejecting “Roman Catholicism” by his rejection of the trappings, his reshuffling (almost in Trumpian fashion) of the Dicastery leadership, and his attempt to further break the stronghold of “Roman Catholicism” by making positive gestures to Luther.

Martin Luther is NOT seen as the new direction of the Vatican, but is a “poke in the eye” to “Roman Catholicism”. Kasper sees Luther as a paradigm of decentralizing the Church, not as a doctrinal school of Catholicism, especially “Roman Catholicism”. So, when an unknowing “Roman Catholic” compares Francis to Luther, it is not literal comparison, though a selective use of their understanding of him will occasionally be used. Your reading of the comparisons are literal and not paradigmatic as the authors have written.

Having been well formed in pre and post Vatican II “Roman Catholicism” of the Polish variety and then becoming a Lutheran as a romantic expedient, I have applied myself to learning and integrating my adopted Confession with the same obsession that I applied to my “Roman Catholic” formation. Being a Lutheran Pastor has enabled me to integrate Lutheran Confessional theology beyond the academic, but in the “living the talk”. That said, I have a different perspective than if I had been raised and formed in Confessional Lutheranism from my youth. This became very apparent when, in 2003, I enrolled in “Ecumenical Theology from a Roman Catholic Perspective” at the Centro Pro Unione in Rome. It was the observation of my cradle Lutheran wife that I had become a Lutheran theologian, as I debated the faculty of the Center. I discovered that I had truly become a Lutheran, but it was also obvious that I understood Roman Catholic theology as a “native speaker”. Quite an experience, indeed!


Why have I written this? To give you a different perspective of reading “Roman Catholicism” (which you seem to admire) and those who are trying to decentralize Roman Catholicism and perhaps achieve what reform movements ike Luther, but not becoming Lutheran. Does this make sense?