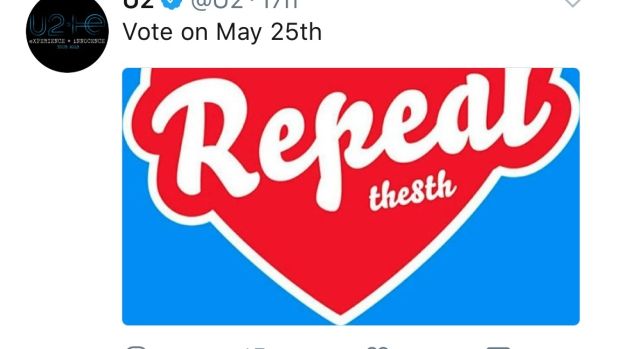 When it was announced that U2 had come out in favor of repealing the Irish ban on abortion, hardly anyone could be surprised.  A few years back, they were supportive of another Irish referendum -- this one in favor of same sex marriage.  So the direction was predictable even if it was a surprise to hear from this so-called Christian rock band.  Even more sadly was the off hand manner of their support for repeal.  On May 2 they simply posted the graphic created by the Irish version of Madison Avenue in support of repeal:  the phrase “Repeal the 8th” over a heart. In effect, death has been made to look like the only loving, compassionate, and reasonable choice.  It is so much more convenient to call for repeal than to say vote for death.
But that is not my main point.  My main point is this.  Those who entertain us (not the most egalitarian of vocations since they are well paid) feel they have the right to impose their political and moral opinions upon us, as the price for being entertained.  Entertainment is rather important to us (at least judged by the money we spend to be entertained) and I can understand this -- although I cannot at all accord to the entertainers the same noble character as the police and soldiers who protect us, the firefighters and emergency medical personnel who come to our aid in desperate moments, the disaster relief workers who go in where everyone else is running from, teachers of our children, daycare workers, those who care for senior citizens, or a host of other very honorable and selfless professions.  But the person who cleans my teeth does not tell me how to vote nor does the doctor who stitches up my wound.  In fact, no grocery store clerk or day care worker or nurse or fireman is telling me what I ought to do when I cast my ballot about anything (yes, some of them have unions who participate in the political process but then U2 would have had an entertainers' union to do their tweeting).
U2 is certainly not the only band to do something like this.  Not the only entertainer to play upon popularity to tell us ordinary peons how to vote (since we just might vote wrongly).  Nope, they are not alone but neither does that make it laudable and right.  In fact, I am rather tired of being told what I must do by people receiving their self-serving awards to each other for making money off of me and the general populace who listens to their music or watches their movies or TV shows.  Maybe I am too cranky but they are a 21st century version of the fools kept by kings and queens to entertain them when the burden of governing became too complicated.  They were not souls of moral authority or great wisdom but, well, court jesters.  Now, however, we have allowed them to trump the truth of Scripture, the witness of the Church, and the voice of conscience to tell us what we ought to do.  It surely does not help my angst that they are predictably liberal (progressive, excuse me) but this is not about their political stance but about their presumption to know better than me (or you) what we ought to do when cast our votes on things political (and, in the cause of the repeal of the ban on abortion, moral).
So you have heard my rant for the day.  U2 should go back to singing and entertaining us (if you like that sort of music) and leave the moral choices to those whose conscience is put to the test every time they cast a vote.  So, voters need to bone up on the issues and make sure theirs is an informed choice and they need to vote not simply with what they feel but what is right.   God has placed a conscience within us and given us the guidance of His Word and the witness of the Church to help us hear His voice.  This is not a moment to gaze into a crystal ball but time to spend with His Word.  In this case, Christianity does not stand alone in its condemnation of abortion as murder.  So, whether you are Irish or not, no matter what the vote before you is, do not let the folks who entertain you decide for you what is right and how YOU should vote about anything.  From Hollywood to Motown to Nashville to Dublin, it is time to say to those who entertain us.  Thank you but no thanks.
Posted by Pastor Peters at 6:00 AM

We must react in the proper way to celebrity endorsements on behalf of immoral social agendas. We must place them on our own list: "Do not watch. Do not patronize." When I hear certain groups and individuals performing on a radio recording, I change the channel. The same applies to TV. Switch stations. Movies? Do not go. Everything is politically correct today. As a Christian, one must be discriminating about the things you choose to be exposed to.