The problem of smugness. . . 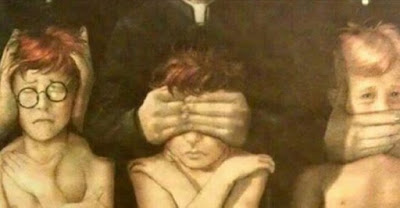 Just when Rome had thought that perhaps there would be some quiet and peace, news of another high profile cleric, a cardinal, hit the proverbial fan and it is clear that there are many who would have, should have, could have done something along the way to prevent this.  Whether it was the high profile nature of the individual accused or his close association with Pope Francis, the tragedy is that some were apparently considered above the scrutiny when Rome was cleaning house to put an end not only to the scandal but to the abuse itself.

Clearly the numbers of priests who abuse is not higher than the numbers of other abusers who have regular contact with children, youth, and teens.  In fact, it is not exactly true to claim that this is strictly a pedophile problem since most cases involved those in their teens.  That does not lessen the scandal or the outrage for such terrible behavior but is merely meant to remind us that this is not simply a matter of pent up sexual desire gone awry but of particular desire.  The vast majority of incidents involved boys or teens or young adults of the same sex.  In other words, the problem here was not the fact that priests are not allowed to marry but of the character of those who were ordained to be priests (and those who ended up as bishops).

Some Christians have been guilty of a certain smugness here -- and one that is both false and dangerous.  While it is true that marriage is commended by St. Paul as a deterrent to unrestrained desire that burns within, marriage is not a cure all for sexual sins of the nature that most abusers have manifested in the Roman Church.  Even if they were married, would these priests have been able to resist the homosexual desire or their desire for youth and children?  Has marriage prevented this same kind of abuse from happening among the clergy of churches where priests and pastors do marry?

The issues here are not simply marriage or even celibacy but those who seek ordination and those who are charged with commending the candidates to the churches for ordination.  This is a grave responsibility.  Just as not everyone who says Lord, Lord enters the Kingdom, not everyone who claims the call of God or who has the desire to serve the Lord is a fit candidate for ordination.  Discernment is the task assigned to those who must certify for ordination the candidates who seek orders.  No matter who these people are, there is a great and solemn weight of duty placed upon them to consider well and choose well -- for the sake of the faithful and for the cause of Christ.

I live in the Bible Belt and there is no shortage of incidents in the news of youth ministers who have heaped upon those in their care the same sort of sexual abuse seen in Rome.  In too many cases, there was clearly little review of the person or careful and deliberate judgment of their character and faith.  St. Paul insists that we lay hands quickly on no man and that those who are commended for ordination and service to the Lord and His people must be of good reputation and character.  Those who are not Roman Catholic have no room to gloat or point fingers for this kind of scandalous news
is a stain upon the whole Church.

Yet I must wonder why, at the same time we bristle at the news of such abuse, there are many whose liberality is ready to change pedophilia from perversion to a differently ordered desire?  Why are we ready to make the consensual nature of such relationships the final arbiter or morality?  In this age of news headlines for all kinds of unwanted and inappropriate sexual abuse, we will soon need to figure out whether or not we agree that something are always wrong and if there is a higher standard of morality than consent.  Until that happens, our trending culture presents a confusing picture of what is right or wrong and when it is right or wrong.  That ambiguity is not found in Scripture or tradition.
Posted by Pastor Peters at 6:00 AM

It is naive to think that the celibacy issue is not a problem in
the Roman Catholic Church. Priests should be allowed to marry and
become a healthy person emotionally, physically, and spiritually.
Their abuse of young boys is based on latent sexual desires that
are not fulfilled in marriage.