What is the offense? 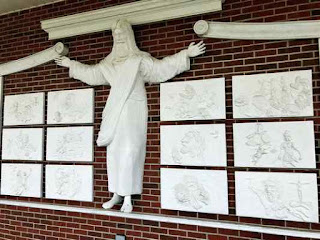 From the News & Observer:


A Baptist church in South Carolina plans to remove a hand-carved statue of Jesus Christ because some congregants believe it’s too “Catholic” for their place of worship.  The hand-carved, 7-foot (2-meter) statue and accompanying reliefs depicting scenes from Christ’s life have been displayed outside Red Bank Baptist Church in Lexington for a decade.  But in a letter to the artist, Pastor Jeff Wright said the art would be removed this week.  “We have discovered that there are people that view the art as Catholic in nature,” Wright wrote in the letter to Delbert Baker Jr. A friend of Baker’s posted the letter on Facebook.”

In his own letter responding to Wright, Baker explained his vision of the art, saying it was meant to show Red Bank Baptist had a focus on Christian outreach.
"This is why Christ is represented as though he is stepping outside of the building, not just confined to the idleness of inner walls," Baker wrote in the letter, which his friend also posted on Facebook. "Under each arm, the reliefs depict scriptural and historical events that we as Christians believe represent the life of Christ."

It should be comical -- a Jesus with a too Catholic look about Him -- but it is sad.  There is no Sacred Heart which might identify this statue of Jesus with Roman Catholic piety but that is not enough to save it.  What is offensive is less the look than the Jesus who is holy and righteous, who denies Himself in suffering even to death, and offers His innocent death on behalf of guilty sinners.  It is the Gospel that is offensive -- offensive to our modern ears.  According to their pastor, the statue and reliefs bring into question "the theology and core values of Red Bank Baptist Church."  That is exactly correct.  The issue is not taste but theology, not preferences but truth.

While I have no stake in the whole issue, I fear it is one more example of when churches have become uncomfortable with the true Gospel and cannot live with art that speaks the story faithfully.  Maybe I am wrong, and I would love to give them the benefit of the doubt, but it seems like more than simply bias and prejudice against Roman Catholics and more like some vocal folks who are uncomfortable with the Christ of the Scriptures.  What is interesting is that the relief sculpture has been there for a decade but now it the time when it is being removed.  The times, they are a changin, and Jesus is offensive precisely for being Jesus.  In that, the Baptists are certainly not alone.  While the creator was given the option of taking it down himself, it appears he refused to be party to its removal.


Read more here: http://www.newsobserver.com/news/nation-world/national/article212169759.html#storylink=cpy
Posted by Pastor Peters at 6:00 AM

This shouldn’t surprise anyone really. It is the south. Where even a crucifix can be distasteful. “Jesus is not on that cross anymore!” This isn’t a new feeling from the Baptists. I, being Lutheran, have trouble sometimes with my Baptist friends because I am too “Catholic”. We are friends, and set aside our differences, but sometimes it feels so irrational. What are they afraid of?

Yes it seems odd after all this time. If this church follows Neo Evangelical theology (likely) then there is a serious theological problem; bigger than its iconoclasm.

But it doesn't take theology to have a knee-jerk reaction like this. Some very good Lutheran theologians would do the same in a heartbeat.

Luther did this to us. Perhaps he had to make the liturgical reforms he Some writers say he had no choice; while others say he went too far. But his fiery defenestration of treasures along with trash is the direct cause of the iconoclastic spirit based on my studies.

The Reformation did good, but it atomized the church in the process. Rome hasn't changed an iota, and what good we did inherit is, in our lifetime, crumbling at a rapid rate.

So we carry on. They in their way; we in ours.

I'm grateful to have an oasis in the desert at CLC.

P.S. Actually, taking a closer look at the statue in google images, I would call it pedestrian. But, still, I get your point, and agree with it.

Chaplain7904 says in his comment, "Rome hasn't changed an iota,..," That's really a reach! In my lifetime (I admit to being an old man), I've seen vast changes in Rome from pre-VCII to post-VCII. The bad part is that many of those changes have infected the rest of the Christian Church as well.

No disptue. I, too, am an old guy; the recipient of 12 years of RC education. Partly pre VCII. Rome has changed her clothes since then, but I think she's still Rome underneath. Especially this new breed of militant RC's who occupy, the EWTN kind of folks.

But she's also schizophrenic. She's old Rome as bad as ever; but she also wants to be loved by the world, and so she gives us Francis; and Lumen Gentia.