When the Mormon church announced it was severing all ties with the Boy Scouts of America by the end of 2019, this represented an astonishing 1 of every 5 boys in the organization.  Some 185,000 boys are already out and this moves the final 425,000 into its own faith-based youth program.  A relationship that has stood for nearly a century was ended pretty much when the Scouts made their decision to welcome gay scouts and gay leaders and then to open the doors to females.  Now, to be sure, the Boy Scouts are practically an automatic organization for Mormon boys and the Mormon Church has long been the biggest sponsor of Boy Scout troops in the United States. 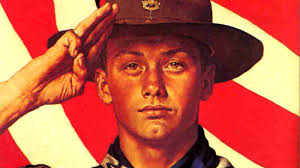 Now we wait to hear what the other big presence in Scouts, the Southern Baptist Convention, will do and whether or not they will follow the Mormon lead.  It has been known for a long time that the Baptists are unhappy with the direction the Boy Scouts has taken.  That would mean a drop of some 100,000 more from an organization already declining significantly since the sex decisions of 2014.  Not to mention the fact that the Girl Scouts are unhappy with the decision of the Boy Scouts to become coed.  Add to that is the uncertainty about how long Roman Catholics can continue to support Scout troops.  The National Catholic Committee on Scouting announced that the changes to scouting will have little impact on the operations and programs in Catholic-chartered units.  The NCCS, a committee of Catholic laity and clergy that serves as an advisory body to the Boy Scouts of America, said the Boy Scouts stipulated that religious partners will continue “to have the right to make decisions for their units based on their religious beliefs.”  The Roman Catholic committee explained that scouting serves the Roman Catholic Church through a charter concept, similar to a franchise, so that a Boy Scout troop chartered to a Catholic parish is owned by the parish and, for now has the right to uphold their own moral standards within the units they charter.  How long this can continue to exist given the changes elsewhere is uncertain.

At an organizational meeting in 2013 in Nashville, Bill Bunkley, one of the group’s leaders, said, “We’re here to honor the legacy of the Boy Scouts of America but now, quite frankly, we are called in a new direction.”  In other words, this ain't your grandpa's scouting troop anymore.  What is fascinating, however, is how the Scouts have chosen to embrace rather cutting edge positions on sex and rushed to redefine themselves -- knowing that this would cost them perhaps a third of all boys!  Clearly this reveals that the influence lies not with those who have traditionally sponsored troops or been heavily invested in the BSA for a very long time.  In fact, the BSA organization is doing everything in its power to reshape its organization, purpose, and identity to fit the pattern of those who have small numbers of boys invested in the program but have a larger than life mouthpiece in the media.  For a time it seemed the BSA was running scared.  Now it appears at least some of the leaders have drunk the koolaid of modernity and decided to honor the Scouting legacy by abandoning much of it.

My point in writing this is simple.  We are so often told that Christians need to participate in endeavors like this in order to provide an alternative voice.  But it is clear that with Scouting that voice is being muzzled and the only voice that counts is the one that heralds the GLBTQ agenda.  Perhaps this will signal the end for any traditional and orthodox Christian churches to support an organization like Scouting that is intent upon adopting a purpose, plan, and program at odds with that traditional and orthodox Christian identity.  Yet the decline in numbers does not seem to have slowed the passage of the BSA into an organization that has fully adopted and implemented some of the most modern ideas of gender, sexuality, and diversity.  If Christians, who have in the past had a big stake in Scouting, cannot make their weight known to slow or stall or eliminate the drift of the BSA away from its historic purpose and identity, who is able to?

The numbers of Trail Life boys swelled instantly when the Scouts first announced their decision several years ago.  Perhaps this group, very small in comparison to the BSA, will gain some ground on their competition.  If you have boys in Scouting, now is the time to consider which organization is best for your boy and your faith. . .
Posted by Pastor Peters at 6:00 AM

Following suit after the cultural zeitgeist, the BSA is hell-bent for leather. Fortunately, there are still some isolated pockets of sanity within some units located in the more conservative regions of the country. And what’s up with girls/women joining all-male institutions? Why aren’t girls attracted to the Girl Scouts? Why aren’t boys trying to force their way into the Girl Scouts? What, “separate but equal” doesn’t apply here either? First The Citadel now the BSA? Even allowing women in combat roles in the military does not satisfy the Feminist movement that continues to hold sway in our society while the rest of us are intimidated into silence.

"Resolved, That the Scouting Task Force move quickly with its work to provide such needed guidance; and be it finally
Resolved, That this guidance be made available within 12 to 18 months after the conclusion of this convention."

However, from a June 29, 2017, article, "Faith in Scouting: Meet your 2017 National Duty to God Award recipients" we now know that Dr. Ronald L. Adolphi was "[a]ppointed by the Rev. Dr. [honorary] Matthew C. Harrison of The Lutheran Church-Missouri Synod (LCMS) to serve on the President’s Task Force on Scouting."

Perhaps the Purple Palace was informed that the BSA Federal Charter gives the BSA exclusive right to the names “Boy Scouts of America”, “Scout”, “Boy Scouting”, and “Scouting”, as used within the United States, and in the name of the LCMS Task Force.

BTW, Dr. Adolphi is listed as having a Ph.D. Elsewhere it is noted that Dr. Adolphi's Ph.D. degree was in management from California Coast University, an online degree-offering, for-profit, private university. In 2004, California Coast University was one of several universities investigated in a GAO report, "DIPLOMA MILLS: Diploma Mills Are Easily Created and Some Have Issued Bogus Degrees to Federal Employees at Government Expense." In 2005 California Coast was accredited by the Distance Education Accrediting Commission, which required CCU to stop giving Ph.D. degrees in order to receive its accreditation.

Speaking of The Citadel, I am so proud that the new regimental commander of the South Carolina Corps of Cadets is named Sarah Zorn. She was named on the 175th anniversary of the founding of The Citadel in Charleston, SC. This is a state supported college and has been admitting women since 1995. The first African American cadet was not admitted until 1966. --- Mildred

The LCMS does not need a scouting task force. It merely needs a one page notice from St Louis notifying the entire church body that the BSA, due to its changing agenda and hostility to traditional values, will no longer be sponsored by the denomination, nor will it be allowed to operate on LCMS property. Now that would be the best way to handle the BSA issue, but it takes courage to make this happen. It is likely this matter will remain in limbo due to a lack of intestinal fortitude within the Synod.

Despite the LCMS dissolving its 2013 Memorandum of [Fabulous] Understanding with the BSA in 2015, there are still strong supporters of the BSA within the LCMS. For example, according to the Lutheran Scouting, 26:4, Spring, 2018, p. 2, the Rev. Dr. James Hoke is the chaplain for the National Lutheran Association
on Scouting. And page 3 has this to say about LCMS-rostered Rev. Dana Narring:

"Rev Narring['s] connection with Scouting began in 1967: beginning as a Cub Scout (earning the Arrow of Light) and later advancing to Life Scout (achieving the Order of the Arrow Brotherhood and earning the Pro Deo et Patria religious emblem). Monthly campouts, trips to the 1973 Jamboree in Moraine State Park, PA and boundary waters portaging/canoeing in the U.S. and Canada were part of the life-enhancing experience he enjoyed. As a Woodbadge participant and 3-time staffer, Seabadge, two Philmont Training Staffs (Scouting in the Lutheran Church) plus the Doctorate of Commissioner Science and of Scouting Arts plus many more training courses, he has been blessed to become a highly-trained Scouter – even establishing a Venturing Crew in 2011. Previous positions as District Commissioner, Assistant Council Commissioner, Roundtable Commissioner, Scout-O-Rama Chair, Unit Commissioner, Pack Committee Chair, Pastoral Advisor for the NLAS, and current position as Unit Religious Emblems Chair have provided many opportunities to assist him with molding both adults and youth with the “Timeless Values” of Scouting. His passion for Scouting has also led him to become a fundraiser for the Friends of Scouting effort in the local units. Over the past eight years he has raised more than $78,000 to support Scouting in the Southwest Florida Council. He is called as the pastor to Faith Lutheran, Punta Gorda, Florida since 2009 and currently serves on the six-person LCMS Task Force on Scouting and on the FL/GA District Nominating Committee." [Emphasis added]

An examination of other recent Lutheran Scouting issues would probably find even more LCMS connections. The Purple Palace no doubt is aware of which side of its bread is buttered and who butters a significant part of it.