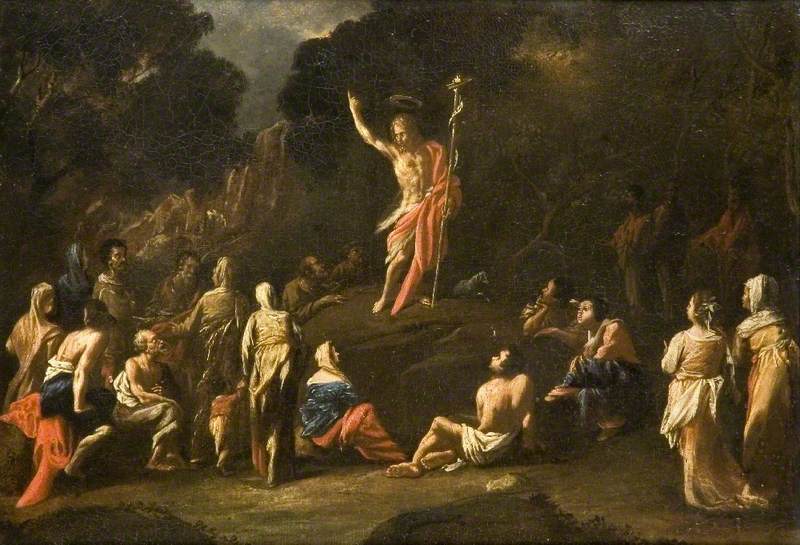 Living in the South we sometimes joke about fire and brimstone preaching.  The idea here is that the job of the preacher is first to preach the sinner so close to hell that he feels the heat and the pain before answering that with the balm of the Gospel.  You don’t hear much about fire and brimstone preaching anymore.  Even old time fundamentalist churches have adopted big screens, cup holders, and praise bands and a more winsome perspective on God.  But not John the Baptist.

John the Forerunner of Christ, came wearing the odd clothing of camel hair and eating the odd food of locusts and wild honey.  He was not some winsome or welcoming.  He did not worry about being liked.  He confronted the weak and the powerful with the same blunt call to repentance.  He cut away all the traditional props that people had used to comfort themselves with the idea that God liked them.  He warned them that the hour was coming and the axe was laid to the root of the tree, a tree already rotting from within.  John does not preach fire and brimstone, he IS fire and brimstone.

St. John does not appease the powerful or conform his message to the feelings of the weak or scratch the itchy ears of those seeking to hear what they want or water down the Word of the Lord.  John does none of those things.  Instead he calls the religious authorities snakes in the grass.  Without repentance and faith, there is only hell and fire, death and more death, according to St. John.  But in the midst of all of this fire and brimstone, St. John points them to Jesus, to the Lamb of God who takes away the sin of the world.  But John does not let himself off the hook.  John is not the mighty one, Jesus is.  John is unworthy of Jesus along with every sinner shaking in his boots with John.  The fire is already lit and the chaff is being readied to feed this eternal fire.

So, Merry Christmas, right?  This is probably not what you came to church today to hear.  This will not put you in a holiday mood.  But it will prepare you for the Lord and His coming in power and glory as Lord and Judge of all.  And this is the Christmas we ought to be concerned about.  Not simply gifts and greetings, cookies and cakes, but holiness and righteousness.  For all the energy and effort put into trying to make a picture perfect Christmas for our families, how much do we put into repairing our lives to be ready for Christ when He comes as judge and King of all?

John does not merely preach this kingdom but offers those shamed by their sins and broken by the weight of their guilt a way to a clear conscience and freedom. Though it is not quite the baptism that Jesus will command, John’s baptism is not without hope.
I baptize you with water for repentance but the One who is coming, the One greater than I, will baptize you with the Holy Spirit and with fire.  John’s baptism may not be the baptism Jesus commanded but it was not without hope because it pointed to Jesus.  It did not offer what Christ’s baptism offered but it pointed them to Christ and directed their hearts to repentance and faith.

Christmas is not coming.  It is past.  Oh sure, we still have the annual remembrance of that miracle in the manger but the saving deed is done.  Christ has died.  Christ is risen.  And Christ will come again.  The fire is here by the power of the Spirit.  It has burned up all our sins and cast its light upon us so that we might burn with the first of His love.  We have been circumcised not of the flesh but of the Spirit.  All our earthly divisions have been healed.  We wear now the one name that counts, the name of Jesus placed upon us in our baptism.

We are in less danger of forgetting this Gospel than we are taking it for granted.  We are in less danger of failing to forget the Christ in the manger than we are forgetting that this is not the whole story.  Christ died in our place upon the cross, rose on the third day and is coming again.  Could we be the Pharisees and Sadducees of our day, going through the motions without feeling the heat of the fire?  Could we be those whose lives show no fruit of repentance and have become complacent in our faith?  Do we need people like John to be the sparks to light a fire within us?  Do we need prophets who will speak God’s Word so that we do not fear the axe but also welcome judgement day?

The sad reality is that preaching has become the mere suggestion of hope rather than real preaching.  Too many of our sermons dance around the truth rather than speaking it bluntly.  Too many preachers are worried more about offending people than offending God by failing to preach the whole counsel of His Word.  Too many sermons are like lukewarm coals whose heat and light has all but gone out.  Too many preachers preach to us a better today but leave us unprepared for eternity.

So John, let the axe fly.  Let it cut to the quick.  We are ready.  We are Christ’s and Christ is ours.  We are here not simply for a manger but for but a new heavens and a new earth.  It is not a baby we seek but the Son of God in all His glorious splendor.  It is not a comfortable Word we want to hear but the fire that consumes what will not endure so that what we are in Christ    may remain.  God grant it for Jesus’ sake.  Amen.
Posted by Pastor Peters at 6:00 AM

Patricia Putri said...
This comment has been removed by a blog administrator.
December 9, 2019 at 3:49 PM