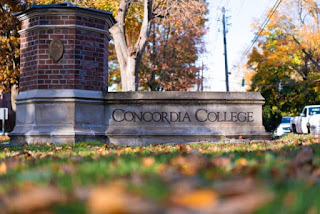 As I have written before, the state of smaller church owned colleges and universities has been precarious for some time.  The press of the politically correct to require the appropriate social justice positions with regard to gender, sexuality, and abortion has been relentless.  Around us the landscape has been changing as more and more states provide reduced cost or even free tuition for community colleges and universities.  On top of this, the number of students in church work programs in these schools continues to shrink raising questions about the core mission of these schools and how this evolution of purpose reflects the tremendous risk and financial cost of running these schools.

Our own church body has seen the closure of six schools since the 1970s.  Concordia Senior College,  St. Paul's College, St. John's College, Concordia Selma, Concordia Portland, and, now, Concordia Bronxville have closed or are closing.  Concordia Ann Arbor did not close but became a satellite campus of Concordia Mequon.  Though the circumstances of eachwas are different, all of them suffered under the weight of increasing costs, difficult competition for students, and financial problems.  All of them received investment from the Synod and loans from Synod entities.  All of them had energetic administrators who tried just about anything and everything to save the schools from closing.  None of them could be justified on the basis of the purpose for which the Synod began those schools -- the training of church workers.  They might not be the last of the schools closed.

I spent more than 13 years in the Atlantic District and countless hours on the campus of Concordia Bronxville.  I attended meetings, district conventions, convocations, musical events, ate in the dining hall, studied in the library, and so many other things over those years there -- all held on the campus of Concordia.  The district office moved there while I was in the district -- occupying a portion of a college building and sharing conference space.  I knew faculty and administration over those years and since.  They did their best for the sake of the college and for the sake of the Synod over the years.  It was not for lack of trying that Bronxville ended up deciding to close at the end of this school year.  I particularly believe that John Nunes was perhaps their last and best hope of preventing this end to a history that is larger than life.  Many of the players in Missouri's history matriculated from Bronxville -- people on both sides of the theological spectrum!  But those days have come and gone.  Those there during my years in the district whom I knew best included Dean Green, Edgar Aufdemberge, Ralph, Dorothy and Timothy Schultz, Gerry Coleman, Tom Sluberski, Dick Heschke, among others. . . (not including a couple of Senior College profs who ended up at Bronxville).

Indeed, that is the problem.  The whole system of Synod colleges was designed primarily for one purpose -- to train up church workers for the Synod.  Most were two year schools and it was not until the early 1980s that they became four year schools or were closed.  Things were already changing then though no one could have foreseen how few Lutherans would be on our campuses, much less the dearth of church work students preparing for church vocations.  The transitions were hopeful but barely a generation out it was apparent that not all schools were flourishing and some might not make it.  For some, risky decisions were undertaken that, if successful, would have been lauded but when they were not, those who made them were seen to be short-sighted or downright foolish.  I wish that it were not the case but the reality is that we are seeing the end of a system of colleges we proudly called our own.

My sister, an Orthodox Christian and a single mom, took courses at Concordia Portland many years ago, hoping to finally achieve her BA. She found it a hostile environment, not because she's Orthodox, but for her Christianity. In one class the professor openly mocked her faith. She transferred to Mercyhurst, which has closed since, but at least she has her degree. Her faith was challenged at Concordia but not shaken.

As you stated, Missouri Synod colleges were initially established as prep schools to supply students to Synod seminaries or for the training of teachers for the Synod's parochial grade schools. The relatively few congregational youths who wanted to continue their education in one of the professions (medical, legal, business, engineering, academic, etc.) would rely on state or private secular colleges and universities.

In the last quarter of the 20th century, with the steady decline in LCMS membership and with the decline in the number of children born to LCMS parents, the LCMS schools, seeing that Synod support of its schools would likely diminish, began to look for other types of educational income. This included acquiring accreditation from some recognized accrediting organization (to complete with other private and state colleges) and adding new academic programs to attract Lutheran and non-Lutheran students. While not trying to compete with ivy league and the top state schools for the upper tail of the academic "Bell Curve," LCMS schools acquired programs that would bring in students who saw (or were convinced by their HS guidance counselor) that a college degree in one of such programs was important for a successful secular career.

However, at the same time, the competition also increased with the addition of local community colleges. Even when some LCMS colleges becoming universities and offered MBAs and MAs, they faced competition from other secular schools and for-profit universities doing the same thing. With the developed of online courses, competition only increased.

Those LCMS colleges and universities who were able to compete in this changing academic market, usually did so by increasing the percentage of their student body (and faculty) who were non-Lutheran, especially since there were less LCMS youth and professors from which to draw. This shift in students brought with it a cultural atmosphere and cultural/political pressure that were less Lutheran (or even less Christian). in some cases this has led to liberalized policies, socially liberal courses and student organizations.

Add to that some poor administrative decisions, and the ChiCom virus-produced pandemic that gutted the very interactions which are part of a meaningful and productive education. One now sees schools that were previously hanging on close.