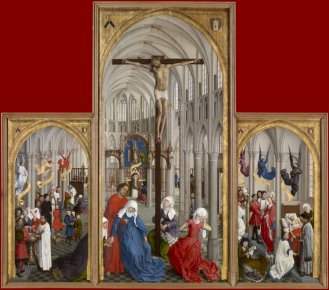 Some have noticed that at times Luther and others of the Reformation era sound rather medieval.  In particular, the focus on Scripture is very medieval.  I have read that the way Luther approached God's Word, and his captivity to that Word, are very medieval.  His unwillingness to go beyond the fact that Christ's flesh and blood is present in the bread and wine and the design of his liturgical edits are also sometimes seen as a bow to medieval influence.  I am sure that many may disagree but I wonder if there is not something to this.

I read another blogger who said Dom Gregory Dix loved to explain, the Reformers, in their endearing desire to be 'biblical', often revealed themselves as Very Medieval Men!  In particular, he was referring to the way Cranmer approached the Circumcision of Our Lord.  Cranmer's collect for that feast is prayed almost exactly as he rendered it so long ago.  It certainly owes its origins to the Scriptures that speak of circumcision -- both the circumcision of the foreskin from the Old Testament and the spiritual circumcision spoken of by St. Paul.

Almyghtie God, whiche madeste thy blessed sonne to be circumcised and obedyente to the law for man; graunt us the true circumcision of thy spirite, that our hertes, and al our membres, being mortifyed from al worldy and carnal lustes, may in al thinges obey thy blessed wil; through the same ...

Lord God, You made Your beloved Son, our Savior, subject to the Law and caused Him to shed His blood on our behalf. Grant us the true circumcision of the Spirit that our hearts may be made pure from all sins; through Jesus Christ, our Lord, who lives and reigns with You and the Holy Spirit, one God, now and forever.

The issue of the medieval character of the Reformation might have another explanation.  The things posited by the Reformers are not only medieval but they are also reflective of the Early Christian era.  In fact, I believe the Reformation was not really a reformation at all but a recovery of a perspective and shape of the faith that has its roots in the first thousand years of Christian history but had become obscured over time.  By the birth of the 1500s the Church's once vibrant faith in the infallibility of Scripture and the grant mystery of our encounter with that Word made flesh in the Eucharist had been mostly lost or hidden.  Read the sermons of the fathers and you see what I mean.

Sometimes it is almost an embarrassment to Lutherans that our Confession quote so often and so authoritatively the fathers of the Church.  Of course, they reference their position not only with the witness of those who went before but in the Word of God and yet the authors see this as a continuum.  I fear that this is something we have lost today.  Although there are those among us who continue to remind us that the faith once delivered to the saints has been lived in faith and practiced in worship before us (thank you, Will Weedon, among others), many Lutherans today have become extreme Biblicists who neither welcome or affirm this continuum.  That is certainly to our poverty.  For the main point of the Reformation was not that catholic was wrong or bad but that the church of the day was no longer catholic.  Indeed, the very people who were accused of introducing novelty had as their main charge against the Roman Church and its papacy that it not only introduced novelty but lived on the basis of that novelty.  That which could not be found in the earlier church except in the form of vague quotes that had to be interpreted from the view of the day had made the church Luther saw as one less catholic than her past and less Biblical.

Now I know that many (most?) Lutherans and Roman Catholics will challenge this assertion.  But the very affirmation that the Reformation was to make the Church more Catholic instead of less is at the heart of the Reformer's zeal.  Sure, Luther exaggerated and made it personal in a way that we find uncomfortable today but the impetus of the Reformation was not to turn the faith into a buffet in which you could pick and choose what you wanted.  No, indeed, the goal of the Reformation was to restore the feast -- the sumptuous feast of the living voice of God in the Scriptures, the baptismal shape and vocation of the life of God's people, the joyous announcement of absolution to the imprisoned conscience of the sinner, and the awe of being invited to some up to the Table of the Lord to eat the flesh of Christ and drink His blood hidden in earthly form.  It was this that was lost to Luther's own tormented soul and it was this Luther and his cohorts expected and even demanded from the Church.  The fact that the Pope and institutional structures of the Roman Church not only rejected this but insisted upon silencing their voices was proof enough to them and to us that their cause, no matter how regretful, was right.  And it still is.

Sadly enough, too many Lutherans have surrendered this Reformation cause of recovery and renewal around the sacraments of life and worship and the efficacious Word to become evangelical wannabes or mirrors of the empty heart and soul of Protestantism.  I fear that it is not Rome or Constantinople that attracts those who leave us but our own unwillingness to life in the embrace of our own Confessional life and vitality that disappoints and turns them to look for another home.  When I say that we have not been Lutheran enough, it is not an appeal to sectarianism but to the very catholicity that the Confessions themselves celebrate and affirm not only for the days in which they were written but for the time to come.  In that respect we are not medieval enough nor are we even close to the early Church in our thinking and perspective -- but Luther was.  It is my hope and prayer that we will end this drift into foreign circles of thought and life and live anew the vision of a reformed, renewed, and recaptured Church -- catholic, apostolic, evangelical (in the right sense of that term), Biblical, creedal, and confessional.  I hope my voice is not alone.

Come now... You said,"The fact that the Pope and institutional structures of the Roman Church not only rejected this but insisted upon silencing their voices was proof enough to them and to us that their cause, no matter how regretful, was right. And it still is." Is that so? If you are right then everyone should be Lutheran, hands down. What history shows is that Luther and all that came after him were wrong on just about everything and that's why we have the Lutheran "church", Congregational "church", Baptist "church", Mormon "church" and all the thousands more that will surely pop up that claim scripture alone, faith alone, perspicuity of scripture, etc. Your "church" was begun by Luther in 1517. What happened from his revolt resulted in many competing "churches" and theologies. Surely not the unity that Christ prayed for at the Last Supper and surely not "one faith, one baptism" as St. Paul says in Ephesians. Luther was right about the sale of indulgences and anyone with a modicum of sense would not contest that today. But indulgences, properly administered remain and will remain until Christ comes again. After all, the Church Jesus founded on Peter has the authority to grant indulgences (oh yes I can hear you all snicker, so be it). The truth is, your "church" was founded by an over scrupulous monk in 1517 while the Catholic Church was founded by Christ and born on Pentecost. If it were not for the Catholic Church the Lutheran "church" would have nothing to live for. It thrives only on lambasting the Catholic Church which is amusing since if Luther and Lutherans have it right, they wouldn't waste their time attacking the Church because it would be evident to everyone that the Lutherans have the totality of the apostolic faith but alas, not everyone is a Lutheran. So much for being "still right."

Look at Church History, specifically the first millennium. There was simply The Christian Church, that is it was catholic (universal). It existed in the East (Constantinople, Antioch, etc), and in the West (Gaul, Italy, Great Britain, etc).

Now imagine two men who sing together and market themselves as "The Brothers." They have a falling out over politics and personalities (1054 AD). One continues to sing as a solo act, but can he honestly call himself "The Brothers"? Isn't he simply A brother and likewise the other brother also?

Rome is under the illusion (or is it delusion?) that it has all truth and only those who fully agree with it can be right about anything. What pride! What stupidity and lack of self-awareness.

PS: Pastor Peters has written an excellent post with much any true Christian should take to heart.

I agree. The Catholic Church was founded by Christ upon the foundation of the apostles and prophets. But at some point, Rome was no longer the Catholic Church. Luther did not open the door to Protestantism but Luther did reveal the cracks in the Roman foundation that others exploited to radical excess that Luther neither expected nor intended. Indeed some of his sharpest jibes are against those who claimed to be Reformers in league with him but who had abandoned the Catholic faith. You know that.

Furthermore, I think if you looked at this blog as an example you would see that Lutherans are their own harshest critics, that much of the secondary criticism is against Protestants who have sold their souls of doctrine and belief to the devil, and that only then does this blog find its way to address Roman Catholics. Funny also because others commenting on this blog suggest that I am too kind on Rome and maybe I am practicing for a swim across the Tiber.

"If you are right then everyone should be Lutheran, hands down." Which is what I would like -- as long as they were fully confessional and liturgical.