The Commemoration of St. Timothy 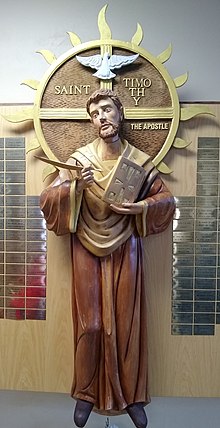 Sermon preached on the Commemoration of St. Timothy, Pastor and Confessor, observed on Thursday, January 21, 2021.

When St. Paul urged young Timothy to fight the good fight, he was not primarily talking about battles in congregations or with obstinate members or even with the powers of the world around us.  Not that there would not be battles of this kind.  There were and there are.  No congregation is without its conflicts and no parish is without those who resist the voice of Scripture and no church is without those difficult members who make it harder to love your brother than to love your enemy.  Of course, these battles were and are and will continue to afflict the church until Christ comes again in His glory.  But the fight St. Paul refers to is personal.

The good fight is that which takes place within you.  St. Paul knows this only too well.  He was a persecutor of the Church before he was ever an apostle to the Gentiles.  He held the coats of the people in whom he had aroused the tempting scent of murder.  He was still a difficult person to get along with.  Ask only Silas, Barnabas, Luke, and, yes, Timothy.  They all felt the barbs of St. Paul’s words and actions when something went wrong.  St. Paul daily fought against the powers of anger and discontent and pride and arrogance.  Some days, he lost that fight and the power of ego lived larger in him than the power of Christ.

Pastors would like to believe the same thing.  They would like to believe that for the pastor marriage and family are not difficult relationships, that for the pastor there is never any temptation to want or steal or lash out in anger or speak lies instead of truth or lust in the shadows of the heart while appearing so decent on the outside.  Pastors would love to think that sin was no longer a problem, that they had dealt with the dark side enough to know how to resist and fight off its influence.  But every day proves that every pastor is a sinner like every Christian.

The faith is a fight.  The life of the faithful is a fight.  It is not a lost cause.  No, we do not fight with human weapons but with the whole armor of God.  With the belt of truth, the breastplate of righteousness, the feet shod with peace, the shield of faith held up with the hand, the helmet of salvation to guard the mind, and the sword of the Spirit to wield against our enemies, we fight.  Even when the enemy is within us, we fight with the same weapons and are guarded by the same armor.

Though devils all the world should fill and hearts too quickly surrender to the old Adam and his ways, we will not give in and we will not give up.  None other than Christ Himself fights for us.  Every day He works to reclaim us as His own people and restore us by the power of His grace.  Every day He speaks with the voice of His Word to make us wise unto salvation and every day He washes us with the once and forever baptismal water.  Every day He feeds us the taste of heaven in His body broken for us and His blood poured out for us.  Every day He sends us back home minus the sins we came here with and with a strong hope to replace our fading strength.  My friends, there is no rest for us but only the battle for our lives that takes place in us every bit as much as it takes place outside of us in the world.  But do not lose heart, we fight as victors to keep what Christ has won.

Do not lose heart, the devil and our own sinful flesh and the world around us cannot win without our own surrender of the good and precious mercy that first made us Christ’s own and still keeps us as His own.  That was the comfort to St. Timothy.  That is the comfort of those who dare to pastor as he once did.  That is the comfort of those who hear the Word and receive its sacramental grace in water, bread, and wine.  It is a fight, but we do not fight alone.  It is a fight against enemies outside of us but they are already defeated.  It is a fight inside our hearts and minds but the Spirit is working to transform our minds and make our hearts His temple.  It is a fight, but it is the good fight of the redeemed to lay hold of the redemption which is ours in Christ Jesus.  May God fill us with boldness, equip us with courage, strengthen our faith, and support our hope, until that day when at last we shall surrender the weapons and rejoice to live in the victory of Christ forevermore.  Amen.