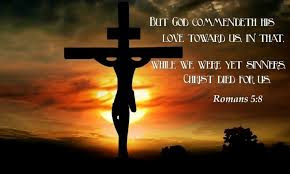 I have always enjoyed the biting irony in St. Paul's words that it is hard enough to find someone to die for a righteous cause and a good man, much less for the unrighteous.  But that is the miracle and mystery of this week.  We herald the love that came for the loveless, the righteous for the unrighteous, and the holy who comes for the unholy.  It is not simply a matter of Christ being our Savior but that He should not have been our Savior.  There was no compelling reason for His incarnation, obedience, suffering, death, and resurrection except such love as no one has ever seen or known apart from Him.

God shows his love for us in that while we were still sinners, Christ died for us. . .  while we were enemies we were reconciled to God by the death of his Son. . .  Who would die for the sinner, the enemy of God and His purposes, except the Son of God?  This is a great mystery beyond comprehension and one that we can approach only by faith.  It is an unreasonable love that becomes sin and stands alone to face God on behalf of us and the whole world.  None of us would do such a thing.  But God has willingly embraced our cause, delivered up His only Son, and He has won salvation for us -- the unworthy, the undeserving, the sinner, and the enemy of God and His purposes.

There is no justification that would make what God has done reasonable; there is no explanation that would make His love understandable.  There is only the cross, a scandal bigger than any other scandal the world has known.  It is a mystery that one can only accept by faith.  And it is an offense to those who would think of God as pure logic.  As St. Paul acknowledges -- it fails as both reason and as a sign for those looking for either.  So the Holy Spirit must lead us where reason and understanding refuse to go.  But God has given us the Spirit to do just that.  Thanks be to God!

And so we pray:  Merciful and everlasting God, You did not spare Your only Son but delivered Him up for us all to bear our sins on the cross. Grant that our hearts may be so fixed with steadfast faith in Him that we fear not the power of sin, death, and the devil; through the same Jesus Christ, our Lord, who lives and reigns with You and the Holy Spirit, one God, now and forever.  Amen.