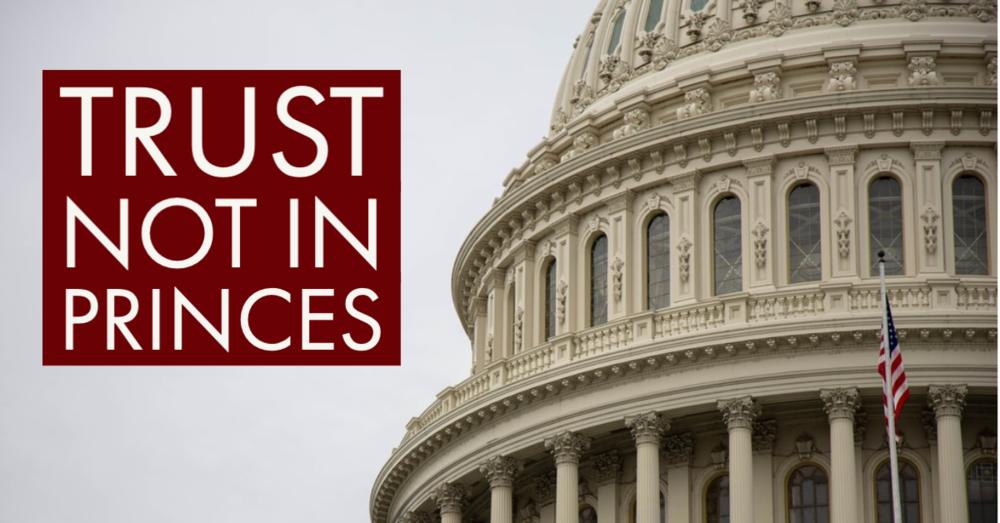 Israel was in a fit because they had judges while all the world around them had kings.  They were relentless in their insistence that they needed a king.  In 1 Samuel 8 God went so far as to warn His chosen people of all the problems they are going to have if they must have a king.  They were sure they knew all the ups and downs and were prepared to accept the bad with the good -- the good being like every other nation.   The Lord warned them that kings tended to become tyrants and dictators.  But the people of God just did not listen.  The end result is that we can all probably name Saul, David, and Solomon -- along with the stories of their own weakness and failings -- but can anyone of us name the kings who followed them?

Of course, we do not have a king -- Washington is to blame or credit for that.  But that has not kept us from looking to the government to solve our problems, particularly as a church.  Now democracy may or may not be better than having a beneficent mortal king and the debate on that point would go on long but whether kings or presidents or prime ministers, government does not replace our responsibility as citizens, our duty to God, and our calling to live God's love toward those around us.  For all our claims to liberty, our history shows that we have abused the gift of freedom for personal license more than we care to admit and have not exploited the gift to pursue personal righteousness as we ought.  Yet, governments and political leaders remain convenient targets for our wrath and convenient places to look for solutions to the things that trouble us.

As a new president comes into office amid familiar conflicts, problems, and challenges, it might be good to remember not to put too much stock in politicians and their promises but at the same time not to forget to hold them accountable to God's will and law.  At the same time, it would also behoove us to remember that no government is to replace our own personal responsibility to follow the commands of God that lighten our feet and guide our paths as the redeemed of the Lord and no entity is to relieve us of the responsibilities we bear toward each other and those in need.  Trust in the Lord, walk in His ways, and delight in His Word.

There is one more thing to remember.  Sometimes we get exactly who we deserve.  If we continue the way we have and disparage even those who are good and decent folks in the political arena, we will have no one left to vote for except scoundrels.  I am as saddened by those good and decent folks who are discouraged from public service because of the cost to them and their families as I am those in public service who betray our trust.  At the same time, no cause is more profound and no need more urgent that the gift of life.  At minimum, we must use this as a litmus test for who it is that is worthy of our vote and our support.  Do no harm.  At least do no harm.  And in the end, pray for those who disappoint us as fervently as we would pray for those we would laud.

"Yet, governments and political leaders remain convenient targets for our wrath and convenient places to look for solutions to the things that trouble us."

And at times politicians are also the right targets, especially when their (especially Demonicrat) policies are aimed at producing the "Curley Effect," named after the one of the 20th century's corrupt Boston mayors, James Michael Curley.

As Edward L. Glaeser and Andrei Shleifer describe in their paper, "The Curley Effect":

"We call this strategy — increasing the relative size of one’s political base through distortionary, wealth-reducing policies — the Curley effect. But it is hardly unique to Curley. Other American mayors, but also politicians around the world, pursued policies that encouraged emigration of their political enemies, raising poverty but gaining political advantage. In his 24 years as mayor, Detroit’s Coleman Young drove white residents and businesses out of the city. 'Under Young, Detroit has become not merely an American city that happens to have a black majority, but a black metropolis, the first major Third World city in the United States. The trappings are all there – showcase projects, blackfisted symbols, an external enemy, and the cult of personality' (Zeev Chafets, 1991, Devil's night: and other true tales of Detroit, New York: Vintage Books).

"In this paper, we focus on the Curley effect in the context of electoral politics, specifically, on destructive tax and public good policies that shape the electorate to the incumbent’s advantage."

Fortunately Detroit has moved beyond the Coleman and Kilpatrick years having a mayor and Police chief who are working in tandem to make Detroit a good place to raise your children. We aren't quite there yet but progress is in the making at least for the time being.

Detroit is hardly a place to raise children ("up to 35% of high school students in the Detroit Public Schools Community District failed at least one class in the first quarter. Those rates are about twice the rates of the previous school year, according to district estimates.")

Also, Detroit is still the major crime cesspool in the U.S. (other than the White House and Congress). From a September 28, 2020, news report, "Detroit leads nation in violent crime per new FBI report":

"Detroit found itself at the top of the FBI's annual list of America's most dangerous cities in 2019, while Sterling Heights once again was among the country's safest.

"The data was published in the FBI's Crime in the United States report Monday morning, placing the city's rate of 1,965 violent crimes per 100,00 people at the top of the list.

"Detroit Police Chief James Craig blamed a couple factors for the findings, saying it is because of illegal guns on the streets and people turning to guns to settle arguments [CV: distinct from using guns for self defense]. Craig said that current factors are to blame for even more troubling stats for 2020 when adding on the stress of COVID-19 to the situation.

"Right now, Craig said non-fatal shootings are up 50 percent and homicides are up 23 percent."