They all forsook Him and fled. . . 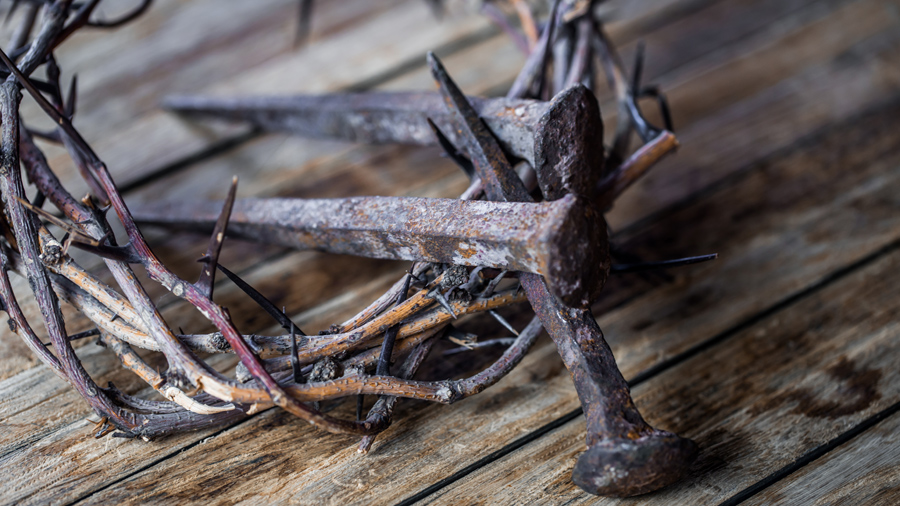 With four accounts of the crucifixion of our Lord, there is no shortage of details to satisfy all our curiosity.  In the case of the Gospel according to St. Mark, the most prominent detail included here and nowhere else involves the curious account of a young man who was watching from afar, of soldiers who went to grab him, and of his escape naked into the night.  Nearly everyone assumes that this was Mark himself, a detail inserted because only he knew it.  Some have suggested he might have lived in the house where Jesus gathered His disciples in the Upper Room.  Perhaps.  In any case, he spied what unfolded as Jesus went to the altar of the cross to suffer and die, offering Himself as the sacrifice for our sins and for the sins of the whole world.  The only ones who would have known this are the man and any one he might have told.  So it might be that Mark is making his own personal confession here.  For immediately before he tells us of his naked escape, there is this line:  They all left Him and fled.  Mark with them.

So they all left.  The sons of Thunder with all bravado, asking for a place at the right and left hand of Jesus in His glory.  Andrew the first to follow Jesus and tell his brother of the Savior.  And all the rest.  Most especially Peter who insisted that though they all deny Jesus, he would not.  The rooster crowed and in shame the man with the big mouth retreated to the shadows to sulk in his guilt and shame.  If Mark’s Gospel is the memoirs of Peter, it could be that Mark included this little detail as a bit of comfort to Peter.  We all know that misery loves company and Peter had to live with his denial just as we all live with our denials, our rejection, our false promises, and our failed intentions.  I suppose there is a bit of consolation in knowing that Peter was not alone but sin has many friends and it does not make those friendships any better.

We certainly try to console ourselves with the idea that as bad as we are, we are not the worst and whatever sins we have done are sins everyone  has done.  It may ease the burden we bear a bit but it does not take sin go away.  If everyone is dying it does not make it any easier to accept our own death or the death of those whom we love.  The sad truth is that we are perfectly ordinary sinners.  We are not unique or special in any way.  Our sin is the sin of all humanity and yet it remains our own sin.  That is the accusation of the Law.  You may not be worse but you are no better than every sinner.  If you can find comfort in this, good on you, I suppose.  But I find nothing there to give me peace, no hope to answer my despair, and no redemption for my many failures to God and to everyone else.  We are all poor miserable sinners.

But that is why all of this took place.  For us.  For the sin into which we were all born and for all the sins that we have committed since.  We are not only complicit  in His death.  We are the beneficiaries of His sacrifice.  Confession is good for the soul but the answer to sin lies in the one who has the power to pay sin’s price and absolve us of our sins.  We may feel alone in our guilt but this is nothing compared to the loneliness of our Savior crying out in His pain, “My God, My God, why have You forsaken Me?”

When they fled, they may have been trying to escape greater guilt and shame but in running away they also ran from the answer to their longing.  Christ had not come to accuse them but to rescue them, to redeem them at the cost of His own suffering and death.  Strangely, because the disciples were gone, the only one who saw what was happening and realized what it meant was a Roman soldier who had the unfortunate luck of pulling guard duty before one more dying criminal.  But when this centurion saw how Jesus died, he came to the only conclusion possible:  “Truly this man was the Son of God.”

My friends, the cross is hard to view.  Sins are hard to admit.  Guilt is hard to confess.  And shame is hard to confront.  But in this cross is the only answer for the guilty, the only atonement for sin, and the only answer for our own death.  Perhaps St. Mark inserted this detail of his own fleeing into the night to comfort St. Peter.  Or just maybe the escape of a naked young man was St. Mark’s own confession so that in this confession he might claim by faith the fruits of Christ’s redeeming work.  You and I can watch from a distance the events of Christ’s suffering and death or we can draw near and find forgiveness in His blood.  We can seek consolation in the guilt of all people or we can find real hope in the blood of Christ which cleanses us from all our sins.  We can listen to the story of Jesus’ obedience unto death on a cross or we can plead the merits of His death and God will not only forgive us but rescue our lost lives from death forevermore.

When the disciples fled into the safety of their homes, they took with them the guilt that was their torment.  So Jesus had to seek them out after His resurrection in order that they might find the peace He had come to bestow.  At the empty tomb, an angel would direct those who peered into its emptiness to go and tell Peter that Christ had risen.  Mark tells us that detail too.  It was absolution for Peter and restoration.  And in the empty tomb was a linen cloth lying in a heap.  Perhaps that detail was for Mark.  The boy who had left his linen cloth behind and run.  Here was absolution for the boy who had, like the disciples, forsaken Christ and run away. 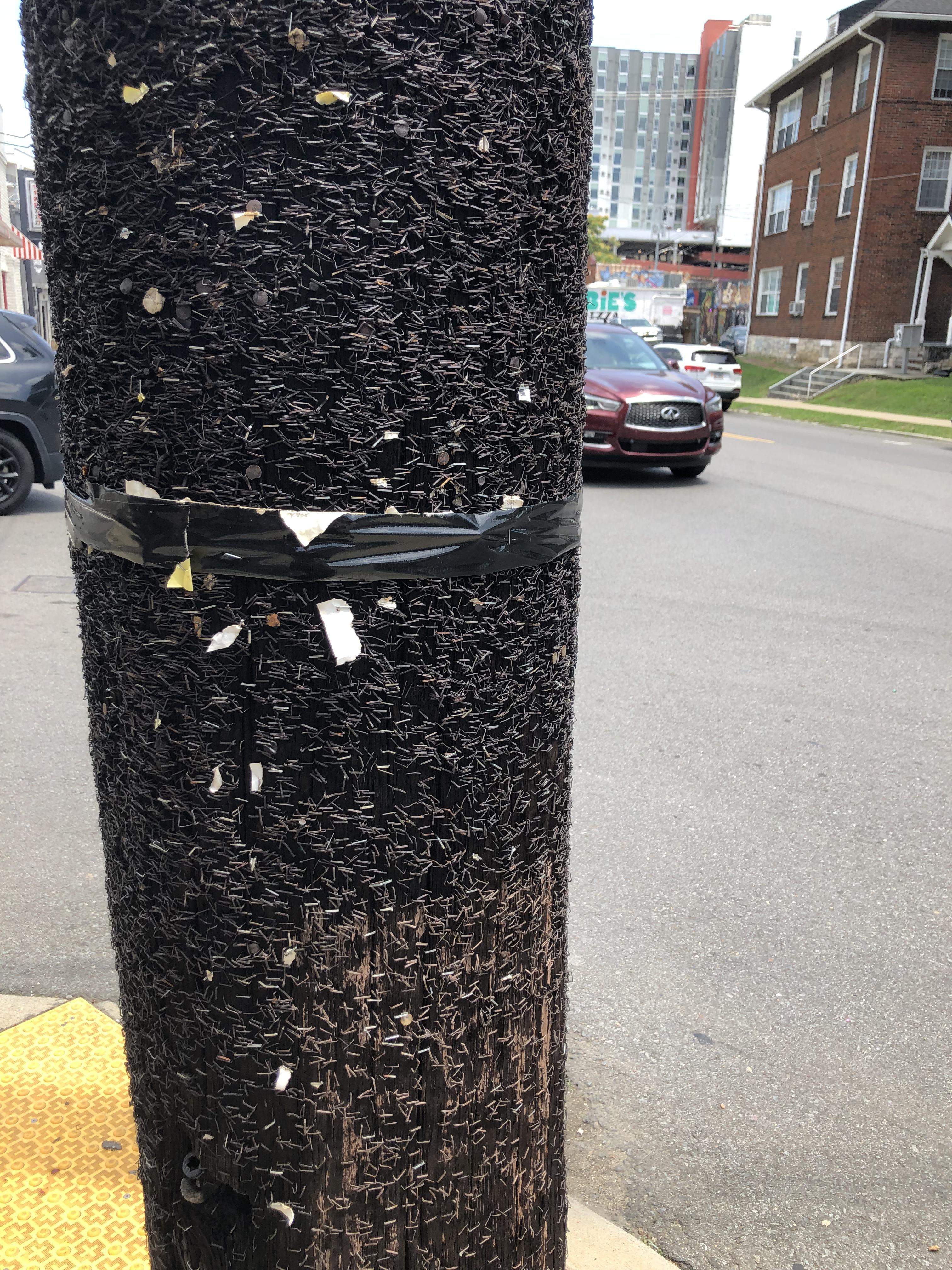 The cross is that detail for you and for me.  I saw a picture of a utility pole.  It had held thousands upon thousands of fliers for lost pets or lost children or babysitting services or items for sale or landscaping offered.  The fliers were all gone and all that was left were staples -- rusty staples that covered the pole until you could not see the wood anymore.  That is His cross.  It is covered with our sins.  The wood is covered with your sin and mind.  Under every nail the record of our faults and failings and the rebellion of our hearts.  And now it is gone.  The sins are gone.  The sins are forgiven.  Christ has borne it all.  Come to the cross and do not flee.  Christ came for you.  He died for you.  He lives for you.  Repent and believe this Gospel.  And there is no more fleeing into the night, only home in arms of our Savior. Amen.

Posted by Pastor Peters at 4:30 AM