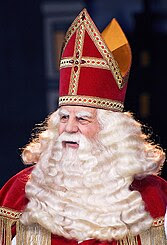 Saint Nicholas, Aghios ["holy"] Nicolaos ["victory of the people"]) (270–6 December 346) is the canonical and most popular name for Nikolaos of Myra, a saint and Greek Bishop of Myra (Demre, in Lycia, part of modern-day Turkey). Because of the many miracles attributed to his intercession, he is also known as Nikolaos the Wonderworker, Nikolaos o Thaumaturgos). He had a reputation for secret gift-giving, such as putting coins in the shoes of those who left them out for him, and thus became the model for Santa Claus, whose English name comes from the Dutch Sinterklaas. His reputation evolved among the faithful, as is common for early Christian saints. In 1087, his relics were furtively translated to Bari, in southeastern Italy; for this reason, he is also known as Nikolaos of Bari.His feastday is December 5.

He was the only son of wealthy Christian parents named Epiphanus and Johanna, and was very religious from an early age. According to legend, Nicholas was said to have rigorously observed the canonical fasts of Wednesdays and Fridays. His wealthy parents died in an epidemic while Nicholas was still young and he was raised by his uncle—also named Nicholas—who was the bishop of Patara. He tonsured the young Nicholas as a reader, and later as presbyter (priest). Nicholas also spent a stint at a monastery named Holy Sion, which had been founded by his uncle.

Most of our Jolly Old St. Nick comes from Sinterklaas.  Although every European culture has something of him associated with Christmas, my personal favorite account is that of the Dutch.  In the days leading up to 5 December (starting when Saint Nicholas has arrived in the Netherlands by steamboat in late November), young children put their shoes in front of the chimneys and sing Sinterklaas songs. Often they put a carrot or some hay in the shoes, as a gift to St. Nicholas' horse. (In recent years the horse has been named Amerigo in The Netherlands and Slechtweervandaag in Flanders.) The next morning they will find a small present in their shoes, ranging from sweets to marbles or some other small toy. On the evening of 5 December, Sinterklaas brings presents to every child that has behaved his or herself well in the past year (in practice, just like with Santa Claus, all children receive gifts without distinction). This is often done by placing a bag filled with presents outside the house or living room, after which a neighbor or parent bangs the door or window, pretending to be Sinterklaas' assistant. Another option is to hire or ask someone to dress up as Sinterklaas and deliver the presents personally. Sinterklaas wears a bishop's robes including a red cape and mitre and is assisted by many mischievous helpers with black faces and colourful Moorish dress, dating back two centuries. These helpers are called 'Zwarte Pieten' ("Black Petes") or "Père Fouettard" in the French-speaking part of Belgium.

The myth is, if a child had been naughty, the Zwarte Pieten put all the naughty children in sacks, and Sinterklaas took them to Spain (it is believed that Sinterklaas comes from Spain, where he returns after 5 December). Therefore, many Sinterklaas songs still allude to a watching Zwarte Piet and a judging Sinterklaas.  Some believe that the black skin color of Zwarte Piet originates in his profession as a chimneysweep, hence the delivery of packages though the chimney.

Alas, the transformation of Saint Nicholas into Santa Claus took centuries and is now so fully entrenched that his life as a Bishop is largely unconnected to the legend.  Sad, really, because his life and good work as priest and Bishop needs no enlargement and the legends attributed to him would actually scandalize him... thought you might want to know some of the real story...
Posted by Pastor Peters at 5:23 AM

You conveniently forgot to mention the part where St. Nick gave Arius a left-hook :D