Renaissance of Traditional Nuns in Nashville 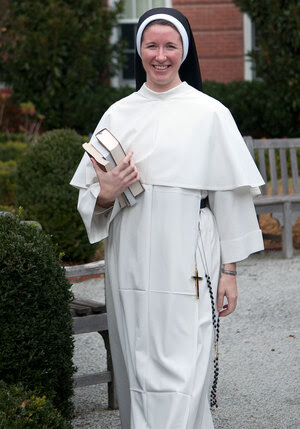 As the Renaissance was a flowering of thought, art, theology, and science, so are we in the South finding a renaissance, of sorts, in the novitiate -- at least to one very traditional order.  You can read the NPR story HERE and discover these radical women and their traditional ways.  The unbending rhythms of prayer and silence and worship have beckoned more and more young women (twenty somethings). With their long habits and disciplined regime, these conservative sisters have become, it seems, the new face of radicalism.

I am not here to report on a successful convent but to remind folks that those who appease the culture, who work to make the Church culturally friendly or even relevant, have become the new face of traditionalism.  Those who believe the Church has its own culture and one of its most important traits is that it does not change with every whim of fad or trend, have become the new radicals.  And it is not limited only to Roman Catholics.  The same is true among Lutherans.

The praise bands and casual worship styles of the baby boomers are no longer radical but ordinary -- run of the mill.  Youth are increasingly finding these dated and even trivial as they search for that which does not change and for those things that help to tie them to the living heritage of the past.  For these youth, the radical future lies with liturgy, chant, silence, hymnody, and truth yesterday, today, and forever the same.  The day when it was radical to hoist a guitar and sing "Michael Row Your Boat Ashore" have come and gone.  Thank God.  The whole nature of the worship wars has shifted and the new face of the radical future looks like altar, reverence, vestments, chant, and hymnody.  It has moved away from the sermon as a story or many stories with a moral to the deep encounter with the mystery long hidden and now revealed in Christ.

I know because I have three twenty something kids and none of them wants anything to do with the kind of worship the boomers like me used to think attracted youth.  They are radical traditionalists and they are not alone.  Look at Higher Things as the new radical while the Terry Dittmer style of youth ministry has become old fashioned and, perhaps, passe.  It is something to look at for those who are into charting movements within the Church.  I hope that our church body is awake enough to realize what is happening and to pay attention to it all.  We run the distinct risk of marginalizing ourselves to the sidelines by sticking with something that is so 1960s and 1970s and enjoyed more by people in that age group than by their children and grandchildren.

If a convent flourishes in the face of dying monastic communities all across the nation, maybe there is a signal there worth noting...  It is something to think about, that is for sure!
Posted by Pastor Peters at 4:07 PM

The "Worship Wars" in Protestant
parishes reached its peak in the
1990's. During the first decade of
the 2lst century there was a move
to authentic worship centered around
authentic preaching. Those Lutheran
parishes with pastors who preach
both law and gospel in well-prepared
Biblical and Christ-centered sermons
will be blessed by the Holy Spirit.
Those with a weekly Eucharist on
Sundays will reach those who hunger
for the Sacrament every Sunday.

"Youth Ministry" in the LCMS is at
a crossroads. The DCE who comes
fresh out of college is burned out
after 10 years. All Night Lock-Ins,
Video Scavenger Hunts, Fund Raisers
for National Youth Gatherings, and
tough competition from Young Life
groups in local High Schools has taken its toll. One way to meet the
spiritual needs of our youth would be
mid-week evening worship followed by
a Bible study. Both of these could
be geared to youth and led by the
pastor.

Amen and Amen. I was not born Lutheran. My father was Roman Catholic and my mom was Southern Baptist. I remember my baptism at age eleven.

The congregation in which I grew up in Yuma, Arizona, was, at the time, very traditional. It was setting one, LBW every Sunday, Holy Communion every Sunday (I did not know it was possible to be Lutheran and not celebrate the Eucharist every week and did not find out this unfortunate practice until college), chanted liturgy and psalms and pastor in full vestments even in the desert. By all of the church growth gurus, youth should have been turned off by all of this; yet, two pastors have come from this congregation from my generation. What was different was that we were blessed with a pastor who didn't try to patronize us youth simply to get our rumps in the church door, but actually cared about why coming in the door was important. He was patient with us and had high expectations of us as confirmation students. He baptized me, instructed me in First Communion, instructed me in confirmation and preach at my ordination service. I was truly blessed by his presence and I only hope I do half as good a job.

who is willing to hear from you 24-7-365 free of charge, able to talk about your world of everyday life is great talk buddy, not huffy, stuffy, or pouty just right for youth today yeah tis the lord our free SPREAD THE WORD TALK WITH THE LORD program inspires daily talks our blogs free as discussion group topics our cool original song lyrics also free for yours g. hubbrd p.o. box 2232 ponte vedra fl 32004 http://talkwiththelord.blogspot.com/