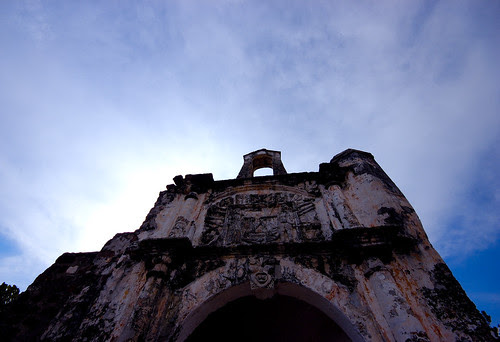 It is kind of interesting to see how the contrasting images of the Church play out among Christian people today.  If you tuned into the LCMS Convention you may have heard Terry Tieman's devotion on the Jesus walking on the water.  His point, if you want to walk on the water, you need to get out of the boat.  Jesus wants us and invites us to walk on water.  We have to get out of our comfort zones, get out of our boats, and learn some things and take some risks for the sake of the kingdom.  Yet the Lutheran hymn, A Mighty Fortress, picks up on another text (Psalm 46) which sees God as a fortress or refuge from the troubles, trials, and assaults of the evil one.  Or you could skip through the Psalms for one or more of the dozens of similar images (Psalm 18: The LORD is my rock, my fortress and my deliverer; my God is my rock, in whom I take refuge. He is my shield and the horn of my salvation, my stronghold.  Psalm 27: The LORD is my light and my salvation—whom shall I fear? The LORD is the stronghold of whom shall I be afraid? or one of my favorites, Psalm 32: You are my hiding place; you will protect me from trouble and surround me with songs of deliverance.).

Are the Scriptures schizophrenic or does it depend upon the circumstance orf situation or what?  I find that the predominant images are of the Church or God as refuge, fortress, or strong-hold.  Hiding place rates up there also - at least as a unique twist on the refuge idea.  Much as I am tempted to try and find texts to say to God's people, "Get off your duff and do something," the primary images of the Church and God are just the opposite -- when you have no where else to run, God is there and His mighty power is enough for every situation and against every enemy.

Growing up in the 1950s and 1960s, going to college in the 1970s, I find that the idea of getting the church out of the boat was a common focus or idea.  To many of that era, the Church was a sleeping giant that needed to be awakened (now that quote ought to set your google cooking since it has been variously assigned to different speakers as they spoke about the Lutheran Church Missouri Synod).  I would also have to say that during much of that time, it was thought God also needed to be awakened.  Whether He was asleep in the back of the boat or hidden away in the mountain tops, He surely was not aware of the stir and fuss going on in the world and He must be summoned from His nap to wake up and do something.

Much as the home has changed from a welcome place where we invite people to a refuge where we go to get away from the stress and turmoil of our lives, so have we returned to the comfort and calm of a God who is a refugre, who provides us a fortress, and who is our strong-hold in the face of every enemy assault.  The Church would do well to pick up on this image and promote it (the legitimate image from Scripture and not as some marketing tool).  People are ripe for picking when it comes to seeking and finding a quiet place, a center in their lives, a refuge from the struggles and storms, and a fortress which cannot be moved when the enemies assault it/us.

Recently a meeting was held at our Church and it brought in a bunch of people who had never been there before.  One woman, accustomed to a far different "style" of Church than Lutheran, commented over and over again about the sense of peace, tranquility, and security she got at our Church.  It was a comment made even though no she was not there to attend a worship service or, for that matter, for any overtly religious activity.


We have no video screens, the building does not look like the mall (inside or out), and the images our distinctly traditional (stained glass, very large Christus Rex, plaster and stenciling, kneelers, Jacobean frontals, candles, tabernacle, etc...  Far from being put off by these things, she was attracted to them.  They spoke to her of the "other" that the Church is and witnesses to while being in the world.  They spoke to her of the idea of the Church (and God) as fortress, refuge, and strong-hold.  They spoken to her of calm and continuity, of peace and presence.  She will probably never become Lutheran but she seemed to get what a lot of Lutherans are missing.

So next time you sing "A Mighty Fortress" (sanitized words or traditianal, isometic or rhythmic tune), take a moment to read those words and listen to what they are saying.  The world may be quite different from the day in which Luther penned that hymn and the situation facing the Church may be distinctly different than what faces us today, but we cry out for the same confident hiding place in the mercy of God, the same strong and powerful God who is able to defend and protect us, His children, and who provides a hiding place in the shadow of His wing to hold us, keep us, and protect us.  Right now, this is the image that I desire and that I cling to most of all...
Posted by Pastor Peters at 11:01 AM

Rather brings to mind the Spanish Missions of the 18th century that dotted the landscape along the south western parts of the continent. They were both refuge and outreach.

What if my comfort zone is to make sure I have a small family so I can maintain an affluent lifestyle?

What if my comfort zone is to teach this idea to my children because I value affluence most, and I want them to be affluent and comfortable?

As a lay delegate to the Convention, I sat dumbfounded during Terry Tieman's "devotion." I actually turned to the pastors on either side of me and asked if this man was in fact a Lutheran pastor. He sounded no different than the preachers in the two Mega-Churches I used to attend during my "Evangelical Wandering" years.

That makes is sound like the fate of the kingdom rests on my shoulders. The kingdom is in trouble if that is true.

Since embracing the Lutheran faith, and gaining an understanding of the doctrine of Vocation, I find my "witnessing" opportunities on the rise. I no longer have to feel guilty about not "getting out there" (you know, scheduled, contrived, in your face, "if you died tonight where would your soul go?" type of evangelism)and "doing" something. I find conversations open up naturally and people are more willing to talk and share because the setting is natural and I am not trying to "direct" the conversation.

Most of the sermons, devotions and Bible studies you will read on Matthew 14:22-33 make similar mistakes in inserting the hearer into the places of the Biblical characters too soon. This story is about the person and nature of Christ. Just before this story he feeds the 5000, showing himself to be a man sent from God a prophet capable of great miracles. In this story He uses the very thing the disciples as fishermen feared to reveal that He is God. Unfortunately too much emphasis is placed upon Peter’s getting out of the boat, and neglects that fact that these men (at this point) in many regards did not really grasp the full person and nature of Christ. Rather than meditating on this wondrous epiphany we’re asked to make this revelation a metaphor for the church, i.e., all about us, and less about Christ. There is no imperative to be found in this text telling us what we ought to go and do. Rather it challenges the reader the way it challenged the disciples; to by faith recognize Jesus Christ as true God and true man.

Locked church doors are the opposite of a Refuge.

If the Church is a refuge, the doors are always open to the refugees...