What was God thinking? 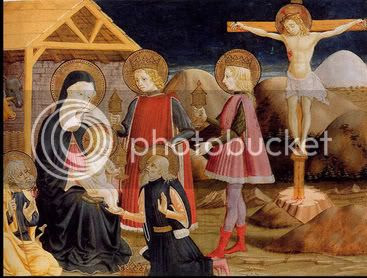 Sermon preached for the Nativity of our Lord, Christmas Day, December 25, 2010.

I remember a movie scene in which a proper woman was sitting somewhat out of place at a bus station.  Every now and then she went up to the counter to find out if the bus was coming.  Each she was told “Yet it is coming.”  Finally after many hours, she heads up to the counter clearly frustrated.  “Is the buscoming or not?”  And the ticket agent replies, “Oh yes, it is coming.  It will be here tomorrow just as the schedule says.”
I wonder if that is not how Israel felt.  What was God thinking?  “Messiah is coming,” says the Lord through the prophets.  But Israel went more than 400 years without one voice heard in the land saying “Thus saith the Lord.”  God said the day was coming but they had grown so weary of waiting, they had given up.  And then came a wild man named John.  Immediately they thought he was the one.  But John said “No, not me... He is coming and He is greater than I am...”  He insisted he was merely a witness, a voice crying in the wilderness.
When finally the Messiah was born, the Word of the Lord who spoke in creation, the people had stopped hoping, stopped expecting, stopped looking. They had grown content with their lives - no matter how good or bad those lives were.  So Jesus came into the world, the Word made flesh, and yet the people of His promise did not recognize Him or receive Him and neither did the world that He had made.  What was God thinking?
The true Light was coming into the world.   He came to His own but they received Him not.  They were looking for another or not looking at all.  He came to the world He had made, and they were not looking either.  But the ways of God are as hidden to us as God is hidden – until God discloses them and reveals Himself.  We do not seek Him but He has sought us out.
We do not apprehend God but God apprehends us, we do not comprehend God but God comprehends us, by becoming one with us in the incarnation of His Son.  We do not ascend to Him but He descends to us.  What was God thinking?  That this is the one and only way it can happen, the one and only way that a world which was lost to Him might be redeemed to be His own again, that God must act on behalf of a world which cannot.
We seem consumed by the idea that God ought to be plain, easy to figure out, easy to understand, and easy to predict.  It is not because we have not tried.  We have tried and tired of it all to get on with life.  But that is indeed the problem.  God is not plain until He makes Himself plain, not easy to figure out until He imparts the understanding of His Word, not easy to predict until we know what to look for... or more precisely, whom to look for.
And what does John say.  To those who received Him.... to those who were willing to let God be God, He gave the right to become the children of God – born not of flesh but the Spirit, not for a life bounded by death but for the life in which death has no domain, not for a life improved but a life reborn and transformed as only God can do.
To all who received Him, He gave the power and right to become the children of God – adopted by grace and given the new birth of baptism and the new name of Christ.  So that the children of God are no longer an ethnic identity or a family lineage but the new birth of water and the Word and the Spirit who gives us the voice to “Amen” what God has done and is going.
God was so careful and we were so careless.  We acted on a whim and bargained away eternity with only the knowledge of death to show for our shrewdness in the garden.  We ran from Him in fear and tried to cover up our sin but the result was hate, jealousy, revenge, and death.
God was so careful and we were so careless.  He was placing the plan of our redemption in place and we insisted we did not know what He was doing and could not see any sign of His efforts.  We stoned the prophets and turned away from God in order to live our lives without His intrusion.
God was so careful and we were so careless.  Comfortable in our beds, we missed it when the heavens opened, the Son was born, the angels sang, and stars shone.  We could not figure God out but God figured us out and did not what we expected but what we needed.  He delivered up a Son whom Israel could not claim exclusive right to own and a world write off as some body else’s Lord.  God was so careful to make sure it would be about Christ and not human will or desire or righteousness.  And to all who received Him, and who receive Him still... the surprise of grace.  That is what God was thinking.  For you and for me, the surprise of grace and of mercy beyond all human imagination.  The Word was made flesh and we have seen in Him the glory of the everlasting Father and the miracle of our own redemption.  Lord, help us to see this always....  Amen
Posted by Pastor Peters at 8:47 PM