The Devotion of a Few 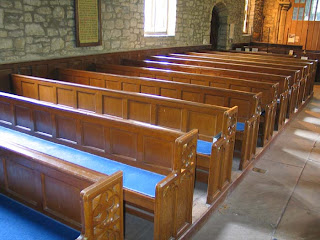 Our parish has some families that drive very long distances to get here -- for some, way more than an hour and for more than a few more than 45 minutes.  It is generally true that those who drive the greatest distance are also those more regular in attendance.  I have been surprised on some "snow" Sundays (if you can have them in Tennessee) to look out in the parish and see those long distance folks present while the folks who live a few blocks away remain home, snug in their beds.  Maybe you have the same circumstance.

I remember one first service family introducing themselves to a second service family.  They mentioned how they were "early birds" and that was why they liked the early service.  The late service folks said they we early birds, too.  They were up and in the car by 7:30 am to arrive at the Church for Sunday school at 9:30 am -- they had nearly a two hour commute!  "Why would you do that?' was the first service reply. Why, indeed.

I am struck by those whose need for and devotion to our assembling together around the Word and Table of the Lord involves such sacrificial choices.  It seems that in some cases, when things are too easy, they are too easy to pass up.  It makes me think that perhaps membership is far too easy.  We all have paper members who have not been among the worshiping community of faith for a long time and show no signs of reappearing.  There are always excuses and I find being the father figure and holding them to account one of the more necessary but distasteful parts of the Pastoral ministry.

A number of things a person can belong to require certain services to be regularly used or their membership is rendered invalid.  Consider the places where we log in on our computer only to find out that since it was too long since our last log in, our identity has been removed and we have to re-register.  Could it be, should it be that membership in the congregation should be renewed on an annual or biennial basis?  I have long been troubled by the fact that people take their participation so casually. Perhaps a membership covenant that asked for regular renewals might serve as a means of affirming the ties the bind, so to speak.  We have several families - not formal members here although their membership resides in another LCMS congregation - but they are among the most faithful and reliable both for worship and service.  Are these not more "members" than those who attend sporadically or not at all?

It has often been said that folks do not realize what they have until it is gone.  In this respect, I have had countless folks move away only to find they cannot find a church home where the liturgy is there, the preaching Law and Gospel, and the kind of rich diversity in hymnody and music we know here.  Some of these folks have then moved back here for one reason or another and become more regular than they were in the past.  But others have learned the bad habit of non-attendance and their experience has made them less regular both where they were and when, on occasion, they have moved back.  The point being that we seem to learn more quickly the habit of non-attendance than the good habit of being regularly together in the Lord's House, around the Word and Table of the Lord, on the Lord's Day.

Just a few rambling thoughts on the overall theme of church attendance I began on Sunday...
Posted by Pastor Peters at 8:36 AM

Some congregations ask their members
to re-commit their membership on the
first Sunday of November for the
next year. With this process active
membership is not taken for granted.

Some parishes put members who have
not communed for two years on their
inactive list and treat them as new
evangelism prospects.

There are parishes with a strong
board of elders who monitor church
attendance and visit members who
have been absent for 3 consecutive
months.

Ultimately the parish must be God's
family where people love and care
for one another's spiritual health
as they gather around Word and
Sacrament. The quality of inter-
personal relationships in the church are important to keep all
involved and focused on their role
in God's family.

Pastor Peters, thanks for your posts on church attendance. I think you are putting in print what many pastors have thought about.

It is a real struggle. It pains any faithful shepherd's heart when he notices members of the Lord's flock missing at the gathering of Word and Sacrament.

It is a struggle too because we do not want to be said to be "legalists" in how we handle these issues, but I can't help but wonder if we have perhaps allowed ourselves to excuse chronic lack of attendance at church, rather than dealing with it forthrightly.

I myself have to drive 30 minutes (not that big of a deal compared to some of your parishoners) to get to a real confessional church out here in the Chicagoland area. Though there are 3 LCMS churches in my town (Arlington Heights) including one literally a half a mile from my house, I have to make a drive on Sundays to find an "actual" Lutheran church. It is truly sad, but I wouldn't miss my new church for anything!
I sure do like this Blog. I just recently discovered it.
-Peter Sovitzky