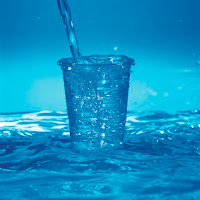 A  week ago Jesus insists that unless you are born of water and the Spirit (Baptism) you cannot enter the Kingdom of God.  Then on Sunday He sits by Jacob's well and tells a Samaritan woman that He has water that will become a spring to eternal life in her and that if she has this water, she will never be thirsty again.  In the middle of this is the Old Testament story of Moses who hits the rock with his staff and water flows to a people complaining that they are thirsty.  It is a lot of talk about water.  But we don't talk like this.  Should we?

It is often said that Lutherans make too much of baptism.  I think that is wrong.  I think we do not talk enough about the water of God that becomes a well spring of eternal life in us.  I think we too often box up baptism and make it into an event in our past, a memory from yesterday (even if we have that memory only because we read what happened on a certificate or see evidence of it in photographs or have heard the story told to us over and over again). We do not talk enough about baptism.  It seems to be thoroughly woven through Jesus' Word and is hidden behind Scriptures even more often than it is obviously referenced.  But we don't think baptismally.  We do not see things through the lens of our baptism.  As an example of this, how many of us heard the two Gospel lessons (and the Old Testament lesson) in Church and did not first think "Ahhhhh, baptism!"  I would venture to say that most Lutherans heard both stories from John's Gospel and the story from Exodus without the light bulb in their brains blinking baptism.

Now my point is not that we need to preach more baptism (though surely we should) but that there is something wrong with us when we hear Scripture talk about water and the Spirit, new birth, living water, etc., and we do not instinctively think BAPTISM.  In a Monday conversation, I talked about baptism and these mentions of water and was told "You would see baptism there; but then again, Pastor, you see baptism everywhere."  Well not everywhere.  Often I see the Eucharist and not just baptism.  But I digress.

Why do we miss baptism in these texts?  Well, let me venture a couple of guesses.  One is that we read Bible versions that are selective in their translation and notes so that baptism and water are like two completely different subjects.  Could it be that the prejudice of the translaters was against sacramental baptism?  Another reason is that baptism merits only a mention in our catechetical instruction and is hardly mentioned when it comes to the nature of our Christian lives and vocations.  Another is that we listen to evangelical teachers, sing evangelical songs, read evangelical books and pray from evangelical prayerbooks and devotional literature.  They do not talk about baptism much since they generally see baptism as an ordinance or law and not as a sacrament in which God does something through an earthly element.  And maybe another reason is that we have an understanding of "spiritual" shaped more by the current thinking of the world than by Scripture, catechism, and Confessions.  And this is a problem.

When I have written and spoken about the need for the script and soundtrack of our lives to be consistent, there are some folks who suggest that I am either paranoid or sectarian in my thinking.  We Lutherans should not be isolationist and we should not believe that we have a corner on exclusive truth.  I agree.  We should not isolate ourselves and we do not have a corner on that exclusive truth.  But we should read and be nurtured by those who share our faith, who speak in the terminology of the means of grace, and who see our lives of faith through the lens of baptism.  It is not because this is Lutheran but because as Lutherans we claim this is what the Scriptures say.  Yet, the sad truth is that Lutherans are often strangers to their own faith -- some fault due to poor catechesis and some fault due to a lack of interest in the scripts and soundtracks that undergird who are we and flow from our Confessional identity.

Yes, it is the Pastor's job to remind us of the things we miss.  But it is also the job of  the people in the pew to seek out the theological perspective that is consistent with our creed and confession.  We do not lack for Lutheran authors and books, hymns and devotional literature.  They may not be on the shelves at Books a Million but Amazon carries them and CPH is very easy to order from -- on line or over the phone.  The people in the pews need to be conversant in the language and vocabulary of our faith.  It is not a matter of reading things into Scripture but reading these things out of Scripture.  Our Confessions claim to do just that.  We claim that these Confessions are faithful and true expositions of Scripture.

So, if you heard or read the lessons for the last two weeks and the baptism light bulb did not go on, maybe something is wrong... maybe that needs to be fixed... sooner rather than later.

Posted by Pastor Peters at 6:39 AM

Lent is the season of preparation for baptism, and in the 3-year lectionary, especially in Year A (the current year), these pericopes are selected for Lent specifically because they have to do with baptism. Because of this, the Roman Rite allows the use of the Year A readings during Lent in Year B and Year C at masses for catechumens, that is, for those preparing for baptism.

I have to admit I did not make that connection Sunday. I just scanned through the sermon again (my Pastor prints a few copies so that those of us with hearing problems don't miss anything, which I really appreciate). I see that baptism was not mentioned, though otherwise it was a really good sermon.