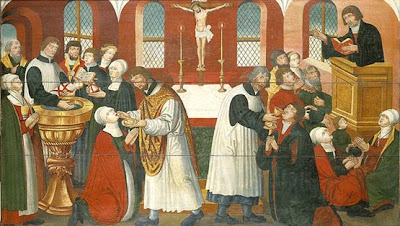 God said it, I believe it, that makes it so...  Having seen that cliched Christianity at work in more places than the bumpers of dual wheeled pickups with gun racks in the back windows, I think it is high time that we as Lutherans distanced ourselves from this screwy Biblicism in which me and my Bible and me and my mind decide what is truth.  While it might sound that we Lutherans with our confession of God's infallible Scriptures have a lot in common with those of this fundamentalist persuasion, we do not have much common ground.

We are not a Biblical Church but a Confessional Church.  Now before you raise up your hands with stones ready to hurl one my way, think about this.  When we confess Scripture as the source and norm of Christian faith and practice, we are defining what sola Scriptura means.  But by saying sola Scriptura we have not yet defined what Scriptura means.  Scripture is not to be supplanted by reason or other authority as that which is the source and the norm of Christian belief and practice but neither is Scripture to be stripped of the "tradition" that surrounds it -- creed and confession.  Scripture is sola but not nuda -- not naked.  It is not some private domain of the individual but the Book of the Church and what it says is not the domain of one man's thought or speculation (not even Luther's) but the domain of the Church.

Sasse said it so much better than I just did.  The true church is gathered not around Scripture, but around the rightly understood, the purely and correctly interpreted Bible. It is the task of the church's confession to express the right understanding of Scripture which the Church has reached. Thus pastors are helped to proclaim only the pure doctrine, and congregations are protected against the whims of the preacher and the misinterpretation of Scripture. In this sense the church's confession is servant of the Word. [From Church and Confession (1941), English translation by Norman Nagel in We Confess: Jesus Christ (Concordia Publishing House, 1984) p. 84, with a HT to Pr. Mark Henderson for drawing my attention back to this statement.]

This purely and correctly interpreted Bible is the Scriptures believed, confessed, stated in creed and confession, proclaimed within the mass, and taught to catechumens through the ages.  As Lutherans we know this but we also tend to forget it.  We have been so influenced by the evangelicals and fundamentalists around us that we often end up talking like them.  I have not particular grudge against them here except that they are not Lutheran and we are.  We are a confessional Church in which we have preserved and proclaimed in those Confessions Scripture's witness purely and correctly stated and interpreted.

Pastors are not on their own before these Scriptures any more than the people in the pew are on their own with them.  We stand with the great teachers and confessors of old.  What we confess is no private interpretation but that which has always been believed, taught, and confessed, at all times and in every place.  We confess a catholic Scripture which is not the possession of the interpreter but the job of the interpreter is to make sure that this Scripture does not change its voice with every wind of change nor switch its teachings with every trend or fad.  We are anchored in this way and Pastors make formal tie to this anchor of the faith when they are ordained.

In this way people are protected from the speculations and internal doubts or fears of the Pastors who serve them in Jesus' name.  We are both directed by and held accountable to those Confessions and their evangelical and catholic witness.  We are thus protected from being sectarian or venturing too far away from this catholic voice of Scripture lest its truth be obscured and its saving power emptied by unrestrained rationalization, heretical speculation, and personal doubt or fear.

Our Confessions are not true because they might be faithful to Scripture but because they are faithful to Scripture and therefore hold us accountable not simply to a book but a Bible read and proclaimed through a particular lens (Confessions).  We do not read the Scriptures as if they had been read for the first time but from the vantage point of the faithful and orthodox confessors of every age.  We do not begin with a blank slate but with the creeds and confessions that have gone before us and that have been proven truthful.  Only in this way can the Scriptural truth be maintained in a world of individualism and subjective truth.  We believe, teach, and confess...  to guide the Pastor in his calling and to protect the people in the pew and to maintain in every age and amid every temptation what is yesterday, today, and forever the same.  As Lutherans this is not an embarrassment to us but the greatest of gifts and treasures.
Posted by Pastor Peters at 5:15 AM

Thanks! I needed this today and everyday!

When the Apostles preach the truth
of Scriptures as recorded in the
Book of Acts, they did not need the
crutch of the Lutheran Confessions.

The Book of Galatians supports the
truth of the gospel that a person is saved by faith in Christ without
the works of the law. Unfortunately
the Roman Catholic ignored the
truth of Galatians and started their money making schemes like
indulgences and masses for the dead
Thanks be to God that Martin Luther
rediscovered justification by faith
as the only means of salvation.

I wouldn't describe a church's necessary confessions of faith in the face of ever-sprouting heresies as a "crutch."

Today you made me cringe. I often pass on your articles to members and others, but I won't be passing this one on. It's not that I disagree fundamentally with what you say, but I definitely disagree with how you say it. I believe that any Lutheran pastor should be able to prove the Lutheran doctrine and worldview (& word-view) from Scripture alone. If this were not the case, it would be false to have "sola Scriptura" be part of our confession. The confessions are a wonderful standard--a norma normata, to which true Lutherans subscribe because they are a correct exposition of Scripture. But if the perspicuity of the Scriptures were not present and true, that wouldn't be the case. It's much less work to simply say "That's what the fathers say." It's much more work to be able to prove why the fathers say what they do. But the work is worthwhile. I'd much rather say, "I, too, believe what I believe because God said so in the Bible," and then proceed to prove why said evangelical isn't living up to his bumper sticker--from the very Scriptures he pretends to be upholding. (Then, afterwards, I can say: even the fathers agree with me: see Book of Concord, page so and so. In many cases, you can even show them from their own historical documents where they've gone off the track. But true, humble, honest, Scripture study and adherence makes an honest man a Lutheran. Then he too will be willing to make a quia subscription to the Scriptures.

I agree with Kelly. I would not call the Lutheran Confessions as a "crutch."

The clarity and effectiveness of
Holy Scripture is not dependent on
man-made documents. By the power of
the Holy Spirit a person can read
the Holy Scripture and trust that
his or her salvation comes through
faith in Christ alone.

God's Word is so powerful that His
promise of salvation in Christ can
penetrate the human heart. The Holy
Spirit does not need Lutheran,
or Roman Catholic, or Greek Orthodox church doctines to achieve
His purpose.

You're setting up a straw man, Anonymous. Who has said that Holy Scripture "depends" on manmade documents, that a person can't hear the words of Scripture and come to faith in Christ? And I'm not following your definition of "doctrine," either. You describe it as though Lutheran doctrine was something distinct from the teachings of Scripture.

Timothy Buelow said: I believe that any Lutheran pastor should be able to prove the Lutheran doctrine and worldview (& word-view) from Scripture alone.

I do not think that my post said anything to contradict this. What I said is that Bible alone does not keep us from error and that Confessions are one more way to lay down that necessary boundary Sasse was talking about -- the Scriptures rightly understood and purely correctly interpreted.

Things may be Biblical that are not orthodox -- all heresy begins with Scripture and then ends up distorting Scripture. The Confessions are one more barrier against being Biblical and failing to be orthodox by holding us accountable to a particular lens -- not a sectarian but orthodox lens -- in which the fathers are quoted to show that Lutherans proclaim not a "new" Gospel or even a new "slant" but the catholic faith. Period.

Dear Pr. Peters, Your original post said: "We are not a Biblical Church but a Confessional Church."
I'm simply saying that I believe a much better thing to say is: "We are a Biblical AND Confessional Church," or better yet, "We are a Confessional, Biblical Church." Every hillbilly I know down south here would take the first statement as an "Aha! I knew it! You Lutherans don't follow the Bible!" I'm not willing to give the uneducated evangelical types such absolutely easy targets, knowing they'll rarely stay in the conversation long enough to hear what we mean.
As I said, I don't disagree with what you are saying. We're simply talking about approach in dealing with Southern "Bible" folks.