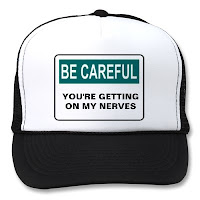 Different things get on different people's nerves and one of the things you notice about writing a blog is that some things are hot button issues.  In the midst of a long post about something else, you can merely mention chanting or Mary or something like this and the comments will abound.  I find it curious that in a recent post the issue of chanting occasioned so many comments when it was barely mentioned in my post, the same with Mary in another post. Actually, truth to be told, I mentioned them specifically to see if they would light up the comments board.  And they did.

If anything will doom the conversation that Missouri needs to have it is when we focus on the little things that get on our nerves instead of hearing the whole thing.  I am not suggesting that I am immune from this.  I am not.  I struggle with the same temptation to sift through things and find something that hits my hot button and then react to that instead of overall article.  It is, probably, human nature,  but it will surely kill the very dialog that we need to have.

So what do we do?  I would suggest that we learn to ignore the obvious things that touch a nerve and listen to the rest of it, reacting to the larger thrust of the article before addressing any of the specifics that we find objectionable.  As an example, I read Burkee's book on the power and politics of the Missouri Synod in the 1960s and 1970s but his repeated error of calling Robert Preus the older brother instead of Jack Preus (who was four years older than Robert) almost caused me to put the book down.  In the end I felt compelled to mention this flaw in the book (which should have been caught by a good editor or proofreader) and used it to paint the whole scholarship of the author.  That was not exactly accurate.  I did find much in the book both accurate from what I knew and experienced living through those years and even learned a few things.  I am still not much of a fan since I believe there were broad strokes that were not fair (such as painting Missouri's conflict in the context of Nixon's resurgence of the right after the rebellion of the 1960s).  In the end it was a good read and I was glad to have read it.

I believe that most Lutherans would find things in Luther that they cannot believe or abide (his more Marian devotion than ours today, being one of them).  But we do not judge Luther on the basis of every one of his written words.  We make a judgment of him based upon the whole of his contribution.  The great tendency of worship wars or communion wars or Bible wars is to nit pick and to tear down the big things by nibbling away at the small things.  If our church body is to find some consensus, if we are to heal the divisions, or if we are to learn together, we will need to resist the great temptation to react to the raw nerve things and speak to the major thrust of the article first.

Both sides of these Missouri wars have a well-deserved reputation for prejudging, for dismissing because of details, or for refusing to listen to anything by this author or that.  It is not helpful to us.  We need to be serious and we need to seriously address some of those divisions that are testing the very seams of the garment that is Missouri.  At the same time, we best address those divisions more with a needle and thread and less with a scissors.

On many issues I am probably pretty right of center in Missouri; on others I am in the middle.  On one or two I am probably left of center (at least judging from the blogosphere and the comments on this particular blog).  I suspect that each of us has some of the same contradictions within us.  Missouri's strength of the past and the promise of its future lies in our willingness to listen a bit more and to react more deliberately than instinctively.
Posted by Pastor Peters at 9:26 AM

Unfortunately, the "wars" in LCMS are
not settled on the basis of God's
Word and the Lutheran Confessions.
Usually it comes down to Synodical
conventions which vote on issues
according to raw political power.

Looking for and Hyper-focusing on "error" seems to be part of the genetic makeup of Missourians.
Even after 20 years of being out of the LCMS, I still catch myself looking more for what's wrong or suspect in theological opinions (writings/blogs) or especially in sermons I hear.

Unfortunately, when an error--real or perceived-- is spotted, it becomes very difficult to hear the good to be found.

"I find it curious that in a recent post the issue of chanting occasioned so many comments when it was barely mentioned in my post, the same with Mary in another post."

Regarding the latter, you can hardly find it curious when, rather than a "barely mentioned" Mary, you make an historically erroneous claim about Luther's later view of the immaculate conception of Mary that is contrary to available evidence in Luther's writings previously provided.

And it's hardly curious for one to see a subsequent poster, who happens to be from the other side of the Bosporus, blow smoke in defense of semper virgo.

How long do you suppose it will take before we in the Missouri Synod finally conclude that the one and only God of the universe is deserving of all our attention?

My District just concluded a pastoral/theological conference which fullfilled the Synod mandate to discuss worship. We had as our presenters Rev. Dr. Arthur Just, and Rev. Dr. Arand. Both pastors and laymen spent nearly three days hearing and discussing what worshiop is. I had one attendee say 'why are we doing this, nothing will get solved.' My answer was that the purpose wasn't to 'solve' anything but to get the major parties with our region to talk to one another, and get to know each other so that it becomes increasingly more difficult for us to walk away, dust off our shoes and gather in our collective corners till the next bone of contention falls between us. I learned a lot, had a few assumptions proved, and a more than a few presumptions deflated. This is what we need in Missouri most of all is to gain a brotherly bond that keeps us together in Christ despite differences, and that reminds us that there just might be something I don't know, or that I can still learn, especially from someone I disagree with.
That has really been Missouri's trouble, not that we fight, for in fact much of what we squabble over is important, but that we never reach a resolution, rather we fight until we're tired and then go off to do our own thing. It is rather disheartening at times to read the history of Christendom and see how it often took a Monarch to say to the clergy, 'see here now brothers, you will stay in this room and you will keep hammering away at this disagreement until you have it resolved.' It is sad because the love of Christ hasn't always been enough to compel us to wrestle with what we know, what we presume to reach a God pleasing Biblical resolution, and a peaceful conclusion. I am however, heartend and hopeful since our last conference and pray the discussions continue and the love of Christ prevails.
PS; the best LOL of the day is that my word verification for this post is 'alwar' a freudian contraction of part of my first name and the subject at hand if there ever was one!
Pax-really

Theologically, I am not sure it can be shown there is a dime's worth of difference between Harms, Preus, Bohlmann, Kieschnick, and Harrison. That said, there have been great differences in emphasis, outlook, and practice. It seems that Missouri has and continues to have more issues that relate to practice than to doctrine. That does not mean to minimize such doctrinal disagreements but to suggest that even when united in theology we have not always been united in practice...

If unity in practice means UNIFORMITY
to the conservative mind and unity
in practice became adiaphora to the
moderate mind, then Pastor Peters
has nailed down our problems in the
LCMS.

When they took the oath of office,
only Preus and Bohlmann had earned
PHD's and written or edited books
that would qualify them as serious
theologians. The jury is still out
on Harrison.

121] And many heresies have arisen in the Church only from the hatred of the teachers. Therefore it does not refer to a person's own faults, but to the faults of others, when it says: Charity covereth sins, namely, those of others, and that, too, among men, i.e., even though these offenses occur, yet love overlooks them, forgives, yields, and does not carry all things to the extremity of justice...

...122] Nor was it without design that the apostle taught so frequently concerning this office what the philosophers call ejpieivkeian, leniency. For this virtue is necessary for retaining public harmony [in the Church and the civil government], which cannot last unless pastors and Churches mutually overlook and pardon many things [if they want to be extremely particular about every defect, and do not allow many things to flow by without noticing them].