The Way You Carry the Book 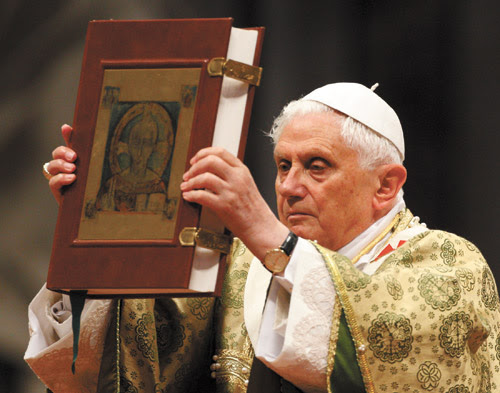 A few words about the setting of a comment.  Where I serve, the first two lessons are read from the lectionary at the lectern.  Between the lessons is the Psalmody or a choir anthem reflective of the pericope.  After the second lesson is either the Alleluia or Lenten Verse (occasionally the proper verse but mostly the general one).  While this verse is being sung, I carry the lectionary book to the pulpit to read the Gospel.  I carry it with both hands on the bottom of the book, held upright and high, until in the pulpit I lay it down on the lectern of the pulpit and open it to the proper page.  After the Gospel, I hold up the book in the same way and say, "The Gospel of the Lord."

Now to the comment.  A parishioner noted the way the book was carried and lifted up after the reading of the Gospel.  This person watched for weeks on end after first noticing my practice.  Finally, the person spoke to me about the practice.  "The way you carry the book tells me what it is and how we relate to it..." He did not ask how or why but observed that my several comments in Bible study and sermons talking about the way we as Lutherans view the Scriptures were borne out in this practice.  God's Word is not to us a history textbook or an encyclopedia of knowledge or a disciplinary book of rules but the life-giving Word of God, living and active, infallible and efficacious.  This parishioner told me how this ritual of carrying the lectionary book with attention to what it is (God's Word) has become something to watch for -- week after week.  This simple gesture is a visual affirmation of what we believe, teach, and confess.  And that is the salutary purpose of ritual, ceremony, and religious gesture within the Divine Service.  They give form to what we believe, teach, and confess.

Now to the result.  This person has been talking to others in the pew about this.  Now I notice that there are many eyes on me as I make my weekly walk from the lectern to the pulpit, carrying the lectionary book (BTW, if any of you know of a source of supply for a suitable Gospel book with grand metal cover that works with the LSB three year calendar and will not force me to take out a second mortgage, please let me know as I would love to carry this).  Others have come to see that the truth we believe, teach, and confess takes visual form in the ceremonial of the mass or Divine Service.

I could speak of other ritual gestures that also give form to what we believe, teach, and confess.  For now, this is enough to illustrate my point.  It is not a matter of whether we like or dislike ritual.  We confess something by its absence just as we confess something by its presence.  The point is not to spiritualize what we do but to make sure what we do reflects what we believe. They flow together as parallel streams from the same source -- what we believe with out hearts, confess with our lips, and show forth in the church usages, rituals, and ceremonial gestures of the mass or Divine Service.

Polo shirt vestments, with none of the ordinary furniture of the chancel, without the pattern of the Divine Service (mass), absent the ritual and ceremonial that accompanies the form and text, speaks just as loudly against what it is that we believe, teach, and confess about the mass (Divine Service) as the faithful practices speak.  But what do they say?  Could it be that what they speak agitates against the confession that the Word of God is authoritative, infallible, and efficaciouis?  That Christ is truly present, distributed, and received in the bread which this Word calls His body and the cup which this Word identifies as His blood?  That the Pastor is acting not for himself but in persona Christi?  That what happens in the Divine Service (mass) is the entrance of heavenly glory into this earthly domain as Christ comes as He has promised and bestows what He has to give?

The point is not necessarily "could" we do without all of this.... but "should" we?  If how you do it speaks as clearly as what you say, then we need to pay attention not only to the text or content but to the context and practice...  Something to think about...

BTW I looked but could not find a handy photo of a Lutheran carrying the Gospel book so I have made do with B16 doing the same thing...
Posted by Pastor Peters at 7:07 AM

I first came into contact with reverence for the Book in the Episcopal church. Each Sunday, the minister would walk to the middle of the church with the (yes, it was gold) Scripture raised above his head before the lesson was read.

What a shame that the outward symbol has been emptied by the fact there is no real belief (at least in that particular body) the Word does what it says.

Thank you, Fr. Peters for this act of true reverence every Sunday. Thank you for having the congregation stand for the Gospel reading. I have been in Baptist churches that stand for the reading of God's Word. It's NOT the same thing.

May this honor of our Christ and His Word never be emptied. This includes the Sacrament of the Table. It is not Roman to raise the host.

Pastor. You very much resemble the current Pope in your photo. And, I like the hat also. Your reverence for the Word is received with thanks.

Here's a newly released ESV Book of the Gospels, with commissioned artwork (albeit in a very abstract style, which is perhaps not ideal for a book to be used in processions):

If the good folks at CPH would make one of these, and if they would include pointing for chanting the Gospel readings (at least the major ones, where the 3-year and 1-year intersect), that would be fantastic.

"I carry the lectionary book..upright
and HIGH"
I RAISE the host and ELEVATE it"
I chant the HIGH notes in liturgy"
I wear ELEVATOR shoes in the chancel"

Sounds like "HIGH CHURCH" Practices
in the no-clerical collar church of
Jack and Robert Preus.

"God's Word is not to us a history textbook or an encyclopedia of knowledge or a disciplinary book of rules but the life-giving Word of God, living and active, infallible and efficacious."

I like the carrying of the book before the reading. In the reading itself, though, it's the Word proclaimed orally that is life-giving and efficacious. (Not that the written Word isn't those things, but the liturgical event is the oral proclamation.) Raising the book after the reading while saying "This is the Word of the Lord" seems to take the focus off that proclamation and imply that Word referred to is the book rather than God's Word being given to the people via the voice of God's servant. I would say it's analogous to the Elevation: it makes sense before the people commune, but less sense afterward.

Liturgical gymnastics such as
lifting the Bible high or elevating
the host to a high level are simply
irrelevant to the power of the gospel
to touch our hearts.

LIFT HIGH THE CROSS is not only a
great hymn but a great reminder that
Christ crucified and Christ arisen
is the focus of our worship service.
Christ has already done the heavy
lifting on the cross to forgive sin.

Very well said indeed. At the Morning Prayer services I conduct at a local nursing home (I'm a lay leader, not the pastor), I place the Bible on a makeshift altar/table, and read from it rather than the bulletin. Taking the Bible from the altar (no pulpit), and then laying it back down before I start preaching reminds me what a serious task it is to preach God's Word.

I, as a layman have learned to embrace the ceremonies of which you write, Rev. Peters.

That having been said, I am glad to find a congregation where Christ, and Him crucified is the focus of the Service from prelude to postlude.