On That Which Dare Not Be Spoken... 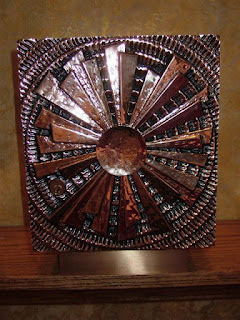 WARNING:  Controversial Topic.... I had been working on this for a while and kept it as a draft but then when I read Latif Gaba's words decided now might be time to bring it out and see if I get tarred and feathered.

I have never quite understood the aversion of most Lutherans to the practice of reservation for communion (as opposed to the thoroughly understandable Lutheran objection to reservation for adoration).  There is not one word in the Lutheran Confessions that is spoken against reservation for communion.  Luther never once spoke about getting rid of tabernacles.  In fact, the Confessions and the second Martin (Chemnitz) do not object to the carrying of the elements to the sick.  Luther himself suggests that the hosts be reserved in a "monstrance" [I am inclined to think that he misspoke here and meant tabernacle] until they could be distributed to the sick (1522).  The Brandenburg Church Order of Joachim II (1540) clearly delineates this practice still in usage there well into the maturity of the Reformation period.  In addition we have the curious oddity of highly decorated pyxes in Lutheran church buildings well after the Reformation period and many crafted during and after the Reformation itself.  Why would there be a pyx if there were no reservation?  Lutheran church buildings retained the sakrament haus or tabernacle long after the Reformation.

Lutheran uneasiness about the presence of Christ has both created a receptionism which locates Christ's presence in the bread and wine for only the barest moment prior to its eating and drinking (a practice which continues to afflict Lutheranism to this day).  Later Lutherans have attempted to redo Luther's dictum that apart from the use there is no sacrament in order to preclude reservation although it is clear that this had nothing to do witch reservation and everything to do with the adoration outside the Divine Service.  Now we have the curious idea that the presence of Christ can neither be located in time (even to the Verba Christi) nor can it be said to continue past the distribution -- as if there were some sacramental shelf life to the Real Presence.

When I entered St. John's College in Winfield I began there a friendship with the esteemed Edward F. Peters who was my teacher, then while he served in New Guinea, later while he was my colleague on Long Island, and in retirement -- a friendship that lasted until his death a few years ago.  The good doctor has the definitive word on the meaning of Luther's principle outside the use there is no sacrament.  His doctoral thesis has been summarized in CTM (1971) and also in  Una Sancta (1968?).  There is also much material in the doctoral thesis of Dr. Thomas Hardt (I believe my copy came from the Seminary printshop at CTS, Ft. Wayne). You can also read the excellent book by Bjarne Teigen The Lord's Supper in the Theology of Martin Chemnitz.

I am not going to argue all the points here, except to say I believe that there are implications for the denial of reservation for communion that make our confession of the Real Presence and the orthodox understanding of consecration more difficult.  Having an expiration date on the presence of Christ in the bread and wine makes having an inception time (Word and element) a bit more complicated.  I am happy to point you to a good summary of Ed Peters' work.  You can read Latif Gaba's blog here.  You can also read some of the discussion on this topic here (against my position) and more here.  Of Diestelmann, you can read a summary here.  And here is still more on the topic.

My point here is that this is not a case of the reservation apple falling far from the tree, rather, if we take what the Confessions and the Lutheran theologians of the orthodox period say about consecration, it would follow that reservation for use (communion and not adoration outside this communion) does not violate Lutheran understanding of the Real Presence but is the reasonable practice that this theology of the Real Presence presumes and expects.  But it has become that thing which we dare not speak of lest we open a whole can of worms about receptionism (the belief that the Real Presence of Christ commences only upon the reception of the host and cup and neither before nor after) and the shoddy way in which we treat the elements (especially the reliquae or the elements which remain after the Divine Service)) that we confess to be the body and blood of Christ.
Posted by Pastor Peters at 6:00 AM

My simple approach is this. The presence is there from the consecration until the intended distribution is done... whether that be the last table, the organist after the service, or the shut in during the afternoon or days later.

Why? Um... I think Jesus is perfectly capable of being present as long as His faithful need Him, and I do not think we have the power to keep Him trapped longer than He needs to be there so we can have parades. But show respect, nonetheless (of course, do we show respect for most things that have been set aside for use in the Church anymore?).

Receptionism is what many Lutherans
believe and it makes the most
theological sense. Otherwise you
drift into the belief of Roman
Catholics and transubstantiation.
Lets be honest high-church Lutherans
are sometimes closet Roman Catholics.

Hear, hear. Although I fully recognize that reservation is and has been good practice, I still believe that consuming everything is the best practice. It avoids silly questions and any chance for desecrating our Lord's Body and Blood.

It matters not how many Lutherans believe in it, nor whether it makes theological sense to you. It matters only what the bible teaches and what the Church has always confessed.

Let's be honest. Receptionist Lutherans are ashamed of what our Confessions teach because they are closet Zwinglians.

And, Pr. Peters, thank you for this insightful post. I have been reconsidering my position on the topic of reservation over the past couple of days, so this was well-timed.

At least put the body and blood of Christ in a container marked "Consecrated" after the supper, since it served a holy use. It should be treated with care and reverence, not as ordinary bread and wine.

Nice post, Pastor. And, regarding Chris Jones' comments: That, as they say, will preach! Excellent. It has gotten so bad out there that I am familiar with a Lutheran parish in Texas which uses baked loaves of bread for their celebrations. After worship any remaining bread is put in the refrigerator and the church secretary eats it on Monday morning with butter and jam! How holy! ((Shudder))

The question of using leavened bread is entirely unrelated. And Luther did not misspeak; a monstrance and a tabernacle are entirely different and unmistakeable for each other. Montrance is related to our word demonstrate -- it means, to show. Originally they were used for relics too, but now only hosts. They are not used for reservation as a tabernacle is, and being portable unlike a tabernacle, could be used to carry consecrated elements to the sick, but only one of them, the bread. So, carrying consecrated elements to the sick is also an unrelated issue to reservation in a tabernacle.

There is neither reason nor excuse for a tabernacle in a Lutheran church, or for "reservation" of the elements for use at an unspecified time. On top of which, only one of the elements is reserved and there are two, after Christ's institution, so the argument vaporises there too.

There are no directions whatever about clean-up after the Last Supper, and none whatever about after the fact handling of the elements. All of that is theologising and humanly devised piety, not revelation and not from God.

Except that we know of the miracles that every scrap and bit of the miracle food was gathered up and kept in baskets! Really. No directions? There is no explicit word in Scripture about baptizing women or infants and yet we believe this is so implicit that they are without need for a direction. You show your prejudice Mr. Maher and it is more obvious than the the prejudices of those you oppose.

Kept in baskets? Where are they now? They were disposed of at some point and in some fashion, and there is nothing about that. Nothing. Nor is the fishes and loaves the Last Supper. Neither is Baptism related to this matter, unless you want to get into saving the water that falls off the person because that too conveyed God's grace.

Or consumed at a later date... or reserved for use.

Could be, but about that the Gospels say -- nothing. Pious guesswork.

So you would have thought Jesus said that because the meal was over these elements were no longer the character of food and should dropped into the latrine...

No. Any more than he said here, do this and that afterward instead. He did not say, nor is there recorded, anything about it. It is we who make inference about it on one side or another.