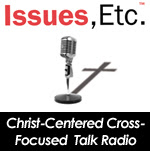 
“Issues, Etc.”, a radio talk show produced by Lutheran Public Radio and hosted by Lutheran Church-Missouri Synod Pastor Todd Wilken, began broadcasting live Monday, March 12 from 3-5 p.m. CST weekdays on KFUO, 850 AM in St. Louis. “Issues, Etc.” has been broadcasting on KSIV, Bott Radio Network in St. Louis since June 30, 2008. KFUO is owned and operated by the LCMS. The popular radio show aired for more than 15 years on KFUO. However, the LCMS cancelled the program on March 18, 2008.


“By purchasing airtime on KFUO instead of KSIV, we will be able to offer ten hours of live programming each week to St. Louis area listeners instead of five hours of programming. KFUO also provides a stronger signal for our listeners in southern Illinois,” said Jeff Schwarz, general manager of LPR.


“We will not become employees of KFUO or the LCMS,” said Pastor Todd Wilken, host of Issues, Etc. “LPR and KFUO are totally separate entities. When listeners donate to KFUO, they won’t be supporting LPR and vice versa. It is vitally important for us to have complete editorial control and financial independence from the LCMS.”

“We are extremely thankful to the Bott family and to the Bott Radio Network for providing us the opportunity to broadcast Issues, Etc. on KSIV,” Schwarz said. “Almost immediately after the cancellation, we were contacted by Rich Bott and presented with the opportunity to continue broadcasting on a terrestrial radio station in St. Louis.”

LPR will continue to produce “Issues, Etc.” from its studios in Collinsville, IL.


Now, four years later, the circle is complete... except that Issues, Etc. is strong and KFUO is seeking some of its strength in programming and in audience.  Issues, Etc. returns by paying for the airtime and strengthening its reach through radio.  All things do work together for good... and we can be thankful that the climate in Missouri has changed so that Issues, Etc. can return.  We can also be thankful that Issues, Etc. is both strong financially and a strong voice for the Gospel so that it is beholden to none but the Lord and those whose support makes LPR possible.  Who would have thought we might meet here for such a day as this?  Only the Lord.... Only by grace...
Posted by Pastor Peters at 6:00 AM

...and what a gracious Lord He is. The first 'big' event I was faced with as a new Lutheran was the fear that Issues, Etc. would go away forever.

The radio program and it's hosts have been key in instructing me not only in Lutheran belief, but in a Lutheran worldview.