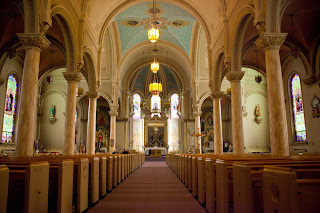 Who speaks for the Church?  As is so often the case, the media loves to point to those within the pews who dissent from or disagree with the teachings of their church.  Call them cafeteria Catholics or lunch line Lutherans or buffet Baptists, the issue remains that dissenters and those who disagree do not get to define what the Church believes, confesses and teaches.

The Obama administration has attempted to exploit the fact that there are Roman Catholics who do violate their church teachings and use birth control.  So what?  There are dieters that cheat at Weight Watchers and AA members that sneak a drink.  There are speeders who violate the speed limits and yet we do not allow them to define what is law and what is not.  It is a bogus argument that will certainly backfire on the administration and it is one that we need to address whenever established teaching is challenged.

Lutherans don't get to decide what Lutherans believe, confess, and teach.  That was decided for us when adopted the Book of Concord as our confessional standard.  Outside of the BoC, the individual resolutions of the various Lutheran bodies define where they stand -- not individuals, be they clergy or lay.

It is about time that we remember this fact and call the ad hominem arguments that appeal to dissent or those who disagree as justification for saying this is what this church or that believes, confesses, and teaches.  Who speaks for the Church?  Its confessors (in Rome, the Pope and his bishops), its councils (Orthodoxy), and its confessions (Lutherans).  No matter what we might like to think, these are not so vague or imprecise as to justify or allow broad diversity.  All three are fairly specific.  We know what Rome teaches, what Constantinople teaches, and what Wittenberg teaches.  Evangelicalism is a muddle and they will have to solve that but for the rest of us, we know who speaks for the Church.  Period.
Posted by Pastor Peters at 6:00 AM

Might it not be more appropriate to say that, instead of drawing attention to themselves, the point of the Lutheran confessions was to draw attention to the Word of God as the final authority over one's beliefs? Popes, Church Councils, and even confessions are for ever subject to the Word of God regardless of how well known or followed their systems of belief may be.

" As is so often the case, the media loves to point to those within the pews who dissent from or disagree with the teachings of their church."

They are not people in the pews.

They never say "A poll of Catholics who attend mass weekly, shows that % blah, blah, blah...."

They let people call themselves Catholic, or whatever, without ever asking whether they regularly sit in a pew, etc.

That is how they get this ridiculous numbers and then extrapolate their spurious conclusions. They intend to deceive.

The only ones swayed by the bandwagon of polls are those who are of the world. We are not. We care only for the Truth of Christ.

As a disciple of Rev. Jeremiah
Wright, Obama has never understood
the real meaning of Christianity.
He is simply a black-muslim in his
beliefs like Malcolm X and many
others. Obama sees religion as a
obstacle to his socialist agenda.