On the Stations of the Cross and their origins... 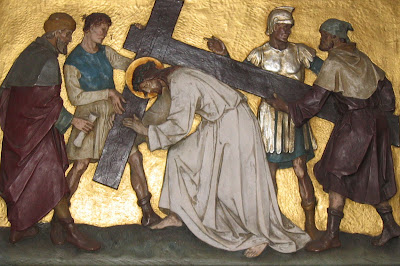 Undoubtedly, the early Christians held the sites of Christ's sorrowful journey to the cross in highest esteem.  For some years, there would still be those who walked the steps with Him and who stood at the foot of His cross -- including the Blessed Virgin  Mary and St. John the Apostle (who lived much later).  It would be expected, then, that Christians would visit the places where Christ walked on the way to Calvary and even pray at the hill on which our redemption was won.

These early Christians knew well the various stops along the way.  They regularly saw the stairs and praetorium where Christ was tried by Pontius Pilate.  The place of our Lord's Crucifixion and Resurrection would have been well known to them. Pilgrims coming from the West desired to see these places and desired to know how Christ traveled from the place of His unjust condemnation to His Crucifixion - the Via Dolorosa or Via Sacra. The Stations of the Cross had their origin in the actual locations in Jerusalem and in the ordinary desire of Christians to honor the way of Christ's walk to the cross.

Early pilgrims to the Holy Land brought these stories of the places and their devotion home with them. In the 400s, Saint Petronius erected a series of chapels in Bologna, Italy, dedicated to the important shrines of Jerusalem. During the Crusades, when pilgrimages and travels to the Holy Land resumed, there was a renewed interest among Europeans in the Via Sacra. By the 11th century, these pilgrims had popularized the devotion. The Franciscans, who were granted administration of the Christian holy places in Jerusalem in 1342, increased its popularity.

In the 1400s, the Stations of the Cross became extremely popular in Europe.  Unlike the artistic expressions found in churches today, they were usually a series of outdoor shrines with a walk way or path to follow.

Unlike the artistic expressions found in churches today, they were usually a series of outdoor shrines with a walk way or path to follow.

Many parishes have outdoor as well as indoor Stations. They are also found at retreat centers and other facilities.

The Stations are a meaningful way to reflect on the Lord's passion, especially during Lent.

Our church has an 20 minute outdoor/walk-through "Passion Drama", but has extended to add Bethlehem, Palm Sunday, all the way through the Ascension. I think it's in about the 15th year. It has added scenes since it begun. We only have scenes straight from Scripture, not some in the "traditional" stations of the cross. I attended one at the RC church in town one year, and saw there were those added scenes.There is no speaking parts in it. Just listen to a tape and watch. It is very well done.
www.passiondrama.com
Kari

Kari, the Passion Drama is very well done and fitting for a Lutheran venue.

I suppose one major difference would be that the Roman stations can be prayed commmunally or individually, on Fridays throughout the year as well as the liturgical season of Lent. The "added scenes" you refer to are rooted in Catholic tradition.

There is a Benedictine monastery near us in KY (Auburn) which utilizes one of the historic buildings of a Shaker Village. I haven't been there in several years, but the monastery used to have an outdoors walk through the traditional stations.

Hello all, in honor of the Stations of the Cross. I have posted the scenes from St Mary's Catholic Church in Assumption, Illinois. I photographed these while I visited my 2nd great grandfather's church.

Here is the link: