The 31 members of the Concordia Wind Ensemble from Concordia University, Ann Arbor, Michigan, gave a concert at Grace Lutheran Church, Clarksville, Tennessee, on Saturday, March 24, and then played in the worship services on Sunday, March 25.  Under the direction of Matthew Wolf, the Ensemble distinguished themselves not only as musicians but as great folks.  Our people were so impressed by the character of these fine men and women and they made a big impact on us.

We enjoyed their accompaniment of two of the hymns of the Divine Service as well as the service music (prelude, offertory, and postlude).  They accorded themselves very well both as instrumentalists and as great young men and women. 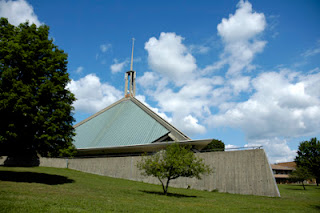 If you are interested, you may want to explore the Kreft Arts Program at Concordia or one of the many fine academic disciplines represented there.  Concordia has gone through a few tough years in the past but, if their visit is any indication of the school, it has a very good future ahead.

I would heartily recommend giving them a call, if you are a prospective student or the parent of one.  The ensemble was highly represented by pre-sems, future music educators, and a host of other careers.  They made a very positive impression upon us and we pray that we made a good impression on them -- given that the Mid-South is a long way from home for folks whose home bases are probably closer to Canada than to Tennessee!
Posted by Pastor Peters at 6:00 AM

Glad to hear that their concert and help during the service went well!

Did your congregation host the Kapelle of Concordia River Forest between 1991-95? I remember singing in Clarksville.

If you can help refresh my memory, or tell me I'm wrong, I'd appreciate it. Thanks.

Thanks for the kind words, Pastor Peters! It was a wonderful tour stop for us, also. We all enjoyed the fellowship with your members. It was also a pleasure being part of the Divine Service.

Yes we did host them with my old friend Tom Gieschen... that was only a couple years after I got here, still in the A-frame and quite crowded as I receall.

I do remember an A-frame. And there was quite a snowstorm too. We were on our way to Florida for our tour. Your folks were most gracious then, almost 20 years ago. Glad my memory and yours are holding up. Thanks.