Beard or no beard... 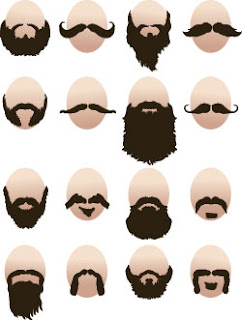 Beards are more than an interest of mine.  I began growing my beard when I left for college in the Fall of '72.  I have not been without a beard ever since. My unimpressed parents have gotten used to it.  My wife and children have never seen me without one.  My first parish was not so sure a beard was a wholesome thing and I reminded them I had the beard before I had the call to NY.  That seemed to tell them which one was presumed (at least in my mind).

Now my beard is a beard and not the glorified stubble that passes for a heavy 5 o'clock shadow so popular today.  And my beard has changed -- though mostly in color.  A bit in shape but not much.  So it was with great interest I read Peter Berger's take on the relationship between beards and faith.  You can read it all for yourself but I have clipped a bit if it to this blog post so you get a flavor for it all.  If you pass through the portrait gallery of the LCMS historical display at the International Center you will find a few beards, a few mustaches (ala Harrison though not as Teddy Roooooosevelt as Harrison's), and a host of various mutton chops and other strange facial hair shapes and designs.  I would suspect most of it was due to fashion, personal taste, and what you could get away with and little of real theological significance.

There are significant differences between Latin and Greek Christianity. Bearded priests have become the norm in Eastern Orthodox churches; in the Roman Catholic Church, while there are some monastic orders whose monks wear beards, secular priests are normally clean-shaven. I don’t know whether there are “grooming regulations” in either case, nor do I know of any in Protestant churches. Mormons stand out: Young men going out on their two-year missionary stints must be clean-shaven, as must students at Brigham Young University. Beards have become the trademark of Orthodox Judaism, though the Torah does not command them directly (Leviticus only has rules for shaping the beard). I would imagine that there are different deductions from these rules in the Talmud. Jews in mourning, while “sitting shive”, don’t shave and let the stubbles sit during this period. Sikhs are very intent on their luxurious beards. Many Hindu ascetics have beards, but that is not so much a symbol as the result of their having no possessions, not even a razor (they do beg—is there no pious barber who can donate a free shave?). I have no knowledge of Buddhist attitudes to facial hair. But of course we are most aware of the role of beards in contemporary Islam. Beards are the male equivalents of female headgear. If young men in Turkey come out of the closet as Islamists and consequently drive their Kemalist parents crazy, their young sisters achieve the same result by covering their hair with the scarves that signify Islamic modesty. As far as I know, there is no commandment to wear beards in the Koran, though there is an authoritative tradition (hadith) according to which the Prophet Muhammad did issue such a commandment.

Apparently I am not the only one touched by this thought.  Read Gottesdienstonline.   For an in depth article, click here.  As for me, I close with Peter Berger's words again:   As to beards, often they symbolize nothing beyond themselves—as Freud did not say, but might have said: Sometimes a beard is just a beard. Beards have carried all sorts of symbolic freight. In the area of religion, it would be nice if beards symbolized moderation and tolerance.
Posted by Pastor Peters at 6:00 AM

So, I guess beards are adiaphora? : )

Beards are fine as is being clean shaven. I do, however, object to beards being prohibited. Women and boys do not have beards. So, prohibiting beards is a sort of misandry. I find that kind of creepy. I would find it just as creepy to require women to have shaved heads, or short hair. The military requires men to cut their hair but not women as sort of understanding that the women are still women.

If there is a legitimate safety issue to having shaved faces or short hair, then of course that would be different.

Too many clergymen try to compensate
for lack of hair on top of their
head with facial hair on their chin
and under their nose.

However, more important is that our
clergymen do not carry extra weight
on their frame. The "pot belly"
ruins their street cred.

The standard beard for Orthodox Clergy has been the standard for over 1500 years. It's not a recent fad. Even in the polemics traded back and forth between west and east, the issue of facial hair was a very pointy issue.

The growing of a beard is passive, it is the act of shaving (making a bald face) that falls into the active.

Having a face full of hair is something you do when you are in college and want to experiment with mustaches, goatees, and beards. Once having succeeded with all three, the novelty quickly wears off.

Been there, done that.

Facial hair may once have been taboo in many circles, but tattoos remain the marks of white trash very much so today.

However, more important is that our
clergymen do not carry extra weight
on their frame. The "pot belly"
ruins their street cred.


Don't they at least get some cred with the other pot bellies?

Maybe a pot belly feels more comfortable with a fellow pot belly than a ripped guy.

I have read that men who wear a beard are trying to hide behind them. I concur 100% (except in the case of the Amish who wear it to show they are married).

Well, let's get this out of the way. No more fashion statement clothes, no status symbol cars, no ostentatious jewelry, only hobbies that produce needed items, etc. Let's all look alike, dress alike, drive, walk, and do alike. Sort of like monks and nuns?

Who cares if a man is hiding a weak chin or a weak persona behind that beard?

Everyone is wearing a mask of some sort.

And you're going to be upset if the man in the pulpit is a few pounds overweight - never mind he can't preach his way out of a wet paper bag?