The difficulty of making the Crystal a real Cathedral... 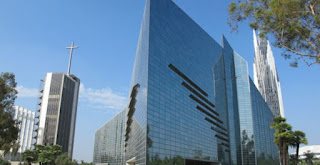 I have listened with interest as some have heralded and others lamented the purchase of the Crystal Cathedral by the Diocese of Orange.  All agree it was a bargain --  the whole thirty-one-acre property and its four buildings for $53 million.  Even if you spend another $100 million renovating the property, it is still a steal compared to the cost of building new (upwards of $250 million).  But the issue here is not who got the bargain of the decade.  The issue is how to convert the icon of religion as entertainment into a real cathedral and an appropriate setting for the Mass.

One author is not so sure it can be done or it should be done (if, indeed, it can be).  Duncan G. Stroik is a professor of architecture at the University of Notre Dame and he has been a careful but vocal critic of modern architecture and its failure to house the central purpose of a building for Roman Catholic use -- the Mass.  His own words:  One of the major criticisms of Catholic architecture during the past fifty years is that it has incorrectly adopted many of the forms of low-church Protestantism: the theater form, a fear of sacred images, asymmetrical layouts, vacuous sanctuaries, minimalist liturgical elements, prominently placed Jacuzzis for baptism, and the banishment of the Blessed Sacrament to the baptistry. The altar area becomes a stage with a focus on entertainment alongside praise bands that perform upbeat music.

I can certainly resonate with his criticism.  In fact, I would argue that we Lutherans have fallen victim to the false assumptions of modern architecture and bought into its weaknesses when constructing our own facilities for worship.  We have forgotten what the purpose of that sacred space is about and so we have borrowed from foreign sources to construct something which succeeds or fails less on looks or appearance than service to the Word and Sacraments and the promotion of the faith.

How many Lutheran buildings are minimalist structures without a clear line of sight to altar (often barely a table) with nary a font or pulpit to stand out?  How many Lutheran buildings are blank canvases devoted more to stark, gray or white space than to the great images of art and glass that once dominated our past?  The jutting images of poured concrete have replaced the polychromed altar pieces of the past and the whimsy of modern architectural form which is still uncomfortable with man as primary occupant and worship as primary purpose.  Until we repent of these architectural monstrosities dominated by screens, speakers, and soloists, we will find the faith of our Confessions as unfitting as some have found the idea of a real Cathedral in place of the fake crystal one in California.
Posted by Pastor Peters at 6:00 AM

To coin a phrase, the papists can swallow the "Crystal Cathedral," glass window panes and all! It was an embarassment when it housed Scheuler, and it will remain so when it houses the papists' novus ordo "Mess," as well.