Traditional and Modern... what does it mean? 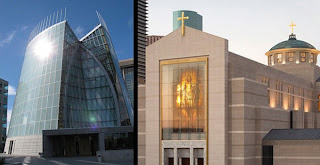 If you have read much on this blog you know of my interest in architecture, specifically in the design and execution of space set apart for the liturgical assembly.  I have some rather strong opinions on this and yet I am not a traditionalist who believes that the most successful modern architecture is the repristination of ancient forms.

I ran across a comparison between the architectural statement two different Roman Catholic cathedrals new to the American landscape.  At first glance it is easy to see which is traditional and which is modern.  One eschews every tradition in form, shape, materials, and design to produce a design which is unmistakably 21st century.  The other seems a throw back to an ancient form, a modern repeat of something already existing in the past of cathedral design.  In the end it is not quite that simple.

The more modern design is not modern but rather radical.  It borrows from the shapes, materials, and details of an airport terminal or mall or public building but for what purpose?  Its accouterments have no logical value or symbolic purpose.  They are new and fresh but only in comparison to that which is old and familiar.  In fact, compared to the rest of what one often sees upon the urban landscape of buildings destined for public use or assembly it is rather traditional and predictable.

The more traditional design is not simply traditional.  It is rather modern.  The shapes and materials are familiar but the walls and ceiling and ornamentation bear the marks of a reserved brush, palate, and design.  It achieves a modern appearance and sense while foregoing the stark, cold, and empty feeling that so many complain about in modern architecture.  Perhaps many would have filled in the blank spaces with ornament for the sake of ornamentation's sake.  In any case, the architects have a remarkable reserve while allowing the very space itself to make the statement.  In case you are wondering, its statement is thoroughly comfortable for the purpose of this space, for the liturgical assembly.

Surprisingly, one is humble and one is infatuated with its own grandeur.  The surprise is that the traditional building expresses a fundamental humlity of design and follow through while the modern building goes to excess in ornamention that exists for no purpose whatsoever -- it is certainly not symbolism related to the faith or the Mass which goes on within its walls.  But don't just listen to me.  Read it all for yourself.  It is all right here....

The quality of the discussion within this little article is exactly the kind of thoughtful and careful conversation which needs to happen among those who design and build churches today.  I wish that my own Lutheran Church Missouri Synod had this kind of reflective evaluation ongoing over the various buildings being built by the congregations of my own communion.  Good job!
Posted by Pastor Peters at 6:00 AM

I'll push it a bit further: I just read about the organs installed in each of these buildings. The Oakland cathedral houses a modern electropneumatic organ by Létourneau, a Canadian builder. While the façade is rather impressive, the specification reveals a run-of-the-mill "eclectic" instrument. Létourneau is one of many above-average organ builders, and they never turn out anything better than organs that are simply above average, despite having gained some high-profile contracts.

The Houston cathedral, on the other hand, has an organ built by Martin Pasi. At first glance it appears the inferior instrument. The visual design, while nice and complementary to the architecture, is less edgy than the Létourneau, and the specification leans toward the Baroque (despite the inclusion of célèstes and harmonic flutes). But this discounts the builder's talents: Pasi is a first-rate artisan organ builder, and has never turned out anything less than a world-class instrument. His pipes are voiced with such care that each stop is something remarkably special, and his actions are unbelievably responsive and precise.

Concerning repertoire: the Létourneau seems more versatile from its specification. However, there is some music that this kind of organ simply cannot play with any legitimacy: dances from the Suzanne van Soldt manuscript, for instance. Though the Pasi specification skews towards the old, I know from experience that organs built like this by such a builder can play the entire literature and make it sound great, even authentic in many cases. Perhaps I might slightly prefer hearing or playing Messiaen or an orchestral transcription by Lemare on the Oakland organ, but I would never want to hear Frescobaldi on it—or even Buxtehude. The colors just aren't there.

Finally, we must not discount the fantastic proportional key action in Pasi's organ. Half of the organ uses traditional mechanical key action; the other half operates on an electric action that mirrors the movement of the key with the pallet, thereby providing the precise control of a mechanical action. This is an innovation of which organists have been dreaming for almost a century.

In sum, the Oakland organ, while appearing modern and novel, like the building that houses it, seems to be just another eclectic (albeit large) church organ, innovating very little and doing nothing at a world class level. The Houston organ appears to be nothing more than a traditional northern European church organ, just like the building that houses it, but in reality innovates more than the Oakland organ and more than likely plays a wider swath of the literature with a greater authenticity. (Disclaimer: though I've never played either of these instruments, I have a terminal degree in organ performance and I consider myself expert enough to make at least an initial judgement in this case.)