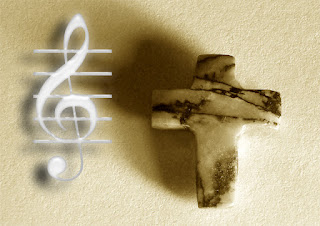 Lutherans hardly need to be reminded:  Next to the Word of God, music deserves the highest praise. She is a mistress and governess of those human emotions… which control men or more often overwhelm them… Whether you wish to comfort the sad, to subdue frivolity, to encourage the despairing, to humble the proud, to calm the passionate or to appease those full of hate… what more effective means than music could you find.   LW 53, p. 323.  We sort of put music into the Church -- well, at least a goodly share of congregational song!  We may not be the only game in town but few churches sing from the beginning to the end of Sunday morning.  It is the Lutheran normal.  Less music is the odd man out in Lutheran services -- and it feels odd -- strange to speak words you are accustomed to singing! I find the Lutheran service without music to be, well, less than Lutheran so to speak -- sort of like a wicked little step child that is there but not acknowledged.  It is not that we think of worship AND music but that worship by its nature is musical!

It hardly ever occurs to Lutherans that there are many Christians for whom music is not an essential and others for whom it is the oddity rather than the norm.  The music itself may be a subject for debate but its essential character as part of the Divine Service is hardly debatable -- at least for Lutherans.  Rome has a larger history of spoken liturgy sans hymns or choir.  Orthodoxy seems to sing worship more than speak it.  But outside of Christianity,   I have to admit I was surprised to find how little music there is associated with Islamic worship(other than the call to prayer which is hardly considered music at all).  Though not all Muslims regard music as such, many speak of music as haram (forbidden), and singing is not normally featured in the religious practices of many mosques.  I cannot say if Buddhists chant or the Hindi worship practices include music but I expect that congregational song is not necessarily found much beyond the pale of Christians and then more normally among non-Roman Catholics.

What I know is that when I think of worship I think of it with a soundtrack -- a musical one.  Nagel's classic introduction to Lutheran Worship again suffices as a conclusion to this thought.

The rhythm of our worship is from him to us, and then from us back to him. He gives his gifts, and together we receive and extol them. We build one another up as we speak to one another in psalms, hymns, and spiritual songs. Our Lord gives us his body to eat and his blood to drink. Finally his blessing moves us out into our calling, where his gifts have their fruition. How best to do this we may learn from his Word and from the way his Word has prompted his worship through the centuries. We are heirs of an astonishingly rich tradition. Each generation receives from those who went before and, in making that tradition of the Divine Service its own, adds what best may serve in its own day--the living heritage and something new.
Posted by Pastor Peters at 6:00 AM